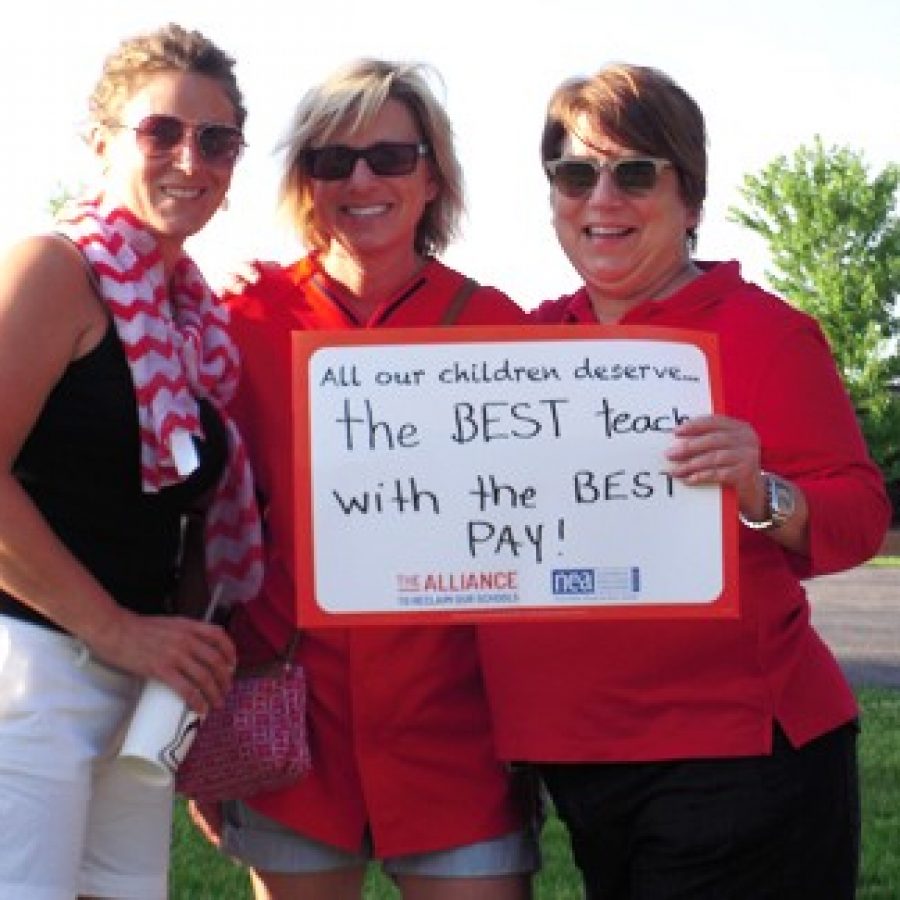 Teachers rally along South Lindbergh Boulevard before the June 14 Lindbergh Board of Education meeting. Photo by Mike Anthony.

A 2016-2017 operating budget that projects no surplus was approved last week by the Lindbergh Board of Education.

Board members voted unanimously June 14 to adopt the operating budget that projects revenues and expenditures at $68,510,810, leaving no surplus funds.

The approved budget includes an average 1.25-percent salary increase for all district employees.

Roughly 400 people attended the meeting to show their support for Lindbergh teachers, who are dissatisfied with the average 1.25-percent salary increase. Teachers also say they’re unhappy because they will not advance a step on the pay schedule for having another year of experience. To provide for step increases, a 3-percent pay raise is needed to fund the pay schedule.

In his budget message, Chief Financial Officer Charles Triplett wrote that district officials are projecting enrollment will increase by more than 300 students for the 2016-2017 school year, which “requires more teachers, classroom furniture, student transportation and instructional supplies. To fund salary increases in addition to addressing growth, savings from staff retirements are being utilized and all revenue sources are maximized based on appropriately conservative estimates of available data.”

For the coming school year, total operating revenues are estimated to increase by $735,977, or 1.1 percent, while total operating expenditures are projected to decrease by $2,468,143. The reduction in expenditures is due to one-time budgeted costs for the remaining construction of Early Childhood Education West and the purchase of the former Johnny’s Market property at 11555 Gravois Road for the construction of a new Central Office building, according to Triplett.

Twenty-eight people addressed the board during the June 14 meeting, with many saying they would support a tax-rate increase to fund teacher salaries.

District officials acknowledge that a tax-rate increase will be needed at some point in the future, but are skeptical voters would approve a ballot measure at this time.

Lindbergh High junior Jessica Kramer, representing #LindberghCares, discussed what she perceives as a lack of respect being shown to teachers.

“… After planning the walkout and attending multiple other protests, we’ve all witnessed the same respect issues our teachers have from administration, the board and superintendent,” she said. “While planning the walkout, we received the utmost respect from our in-school administration, but then once we went to the sit-in, where there was a great lack of respect from Dr. Simpson and Mr. Triplett, we weren’t even allowed inside the Administration Building.

“As soon as we headed towards it, Simpson and Triplett walked straight out and shook four of our hands. They mocked us and remained conceited the whole time. Simpson even asked if we knew how to do math when he threw numbers at us. Yeah, we know how to do math. You didn’t teach us, my teachers did,” she said to applause.

Many of the speakers, including Susan Nickrent McMurtry, posed questions to the board and requested individual responses from board members.

In her remarks, she noted that over the past eight years, roughly 55 percent to 59 percent of the district’s budget has been allocated for salaries.

“Salaries would seem to be a very important and predictable portion of the budget each year. Is there a reason we can’t commit to a target of 60 percent of the budget for salaries? … As a registered voter and active voter in local elections, I would like to request a separate response from each board member so I can tell where you stand on the issues and make a more informed decision on how to use my vote in the next Lindbergh school board election …,” she said.

To a round of applause, she requested that district officials and board members stop talking about the tax incentives approved by the Crestwood Board of Aldermen for the redevelopment of the former Crestwood Plaza.

“I’m a voter in Crestwood. Crestwood has spoken. It’s done. It’s happening,” she said. “Our property taxes are going to go up. We’re going to have a vibrant city again. Everybody’s going to benefit. We’re tired of hearing it …”

In March, the Crestwood Board of Aldermen voted to grant $25 million in tax incentives to Chicago-based UrbanStreet Group, which owns the 47-acre former mall property at Watson and Sappington roads.

In a TIF district, real-estate taxes for school districts, fire districts and other taxing entities are frozen at existing levels for the length of the TIF — up to 23 years.

As land within the TIF district increases in value, the incremental tax revenue — 100 percent of property taxes and 50 percent of sales and utility taxes — is used to retire the TIF obligations.

During a presentation by board members earlier in the meeting, Vice President Don Bee noted Lindbergh will lose over $9 million during the life of the TIF, “which could be anywhere from 20 to 23 years because of not a lot of cash registers that will be there …”

In addition, Lindbergh officials project the district will lose another $95,000 annually as a result of UrbanStreet’s successful appeal of the assessed value of the former mall property.

Other speakers were critical of the purchase of the former 2.2-acre former Johnny’s Market site, contending Lindbergh overpaid for the property, citing county records that place the 2015 appraised value at $806,000.

Lindbergh officials counter that the $1.66 million purchase price for the property was $76,000 less than the appraised market value, as determined by an independent appraiser.

Construction of the new Central Office facility will free up an additional 20,000 square feet for classrooms at Lindbergh High School, which soon will become the largest high school in the state.