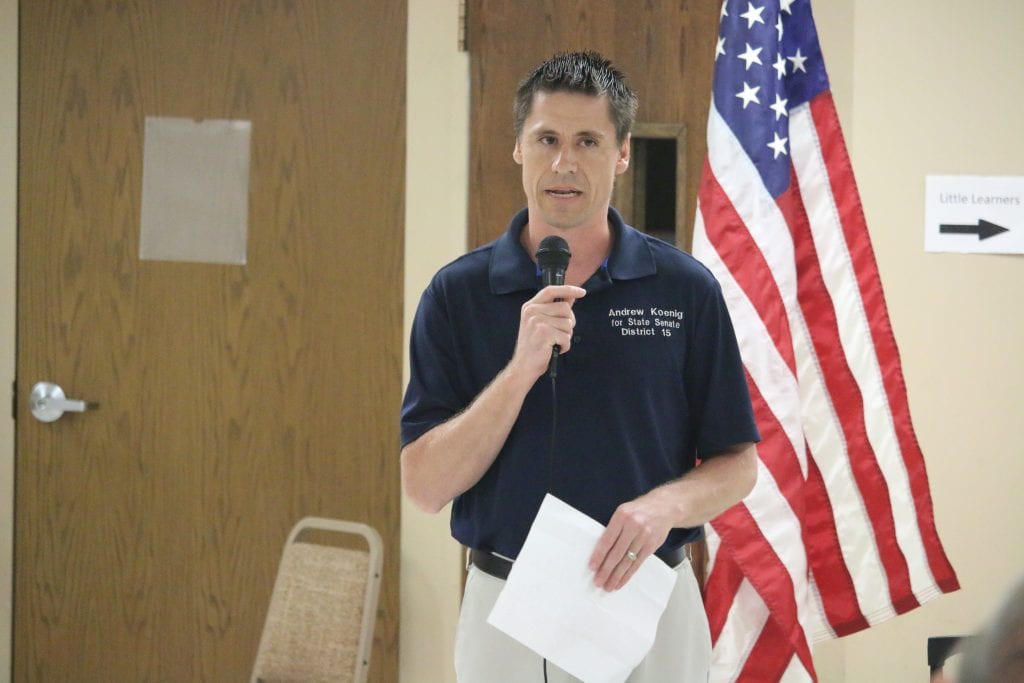 The 2018 session of the Missouri Legislature officially ended last week with a joint veto and special session, wrapping up a year that showcased differences among south county’s legislators that mirror Missouri’s perennial debates about taxes and the budget.

As on most major issues in Jefferson City, Republicans in the supermajority and Democrats in the minority take starkly different views of how to approach spending Missourians’ tax dollars. And the debate plays out in microcosm among south county’s legislators.

On one hand, Republicans say that they are trying to make a government that constantly wastes money more efficient and put more dollars back in taxpayers’ pockets.

“We literally passed tax cuts and we are still going to be able to maintain a balanced budget, that is absolutely awesome. So that’s something to be proud of,” Rep. David Gregory, R-Sunset Hills, told the Tesson Ferry Republican Club this summer. “Watching our spending is one of the things that really, really gets me excited.”

On the other hand, Democrats say that the cuts Republicans choose to make favor the wealthy at the expense of the poor and disabled, who need help the most.

“There’s a feeling that the working people are under siege in this state, that’s the way I feel about it,” Rep. Doug Beck, D-Affton, said this summer at a joint meeting of the Affton and Lemay chambers of commerce. “I do take it personally, and I do get a little emotional about it.”

Sen. Andrew Koenig, R-Manchester, said it was a banner year for conservative ideas on taxes and the budget that he’s long worked for, even before he was elected to represent Sunset Hills and areas in west county in 2016.  Eventually, he’d like to eliminate the income tax altogether. But this year, among other wins, he pushed to narrow the “blight” clause for tax-increment financing, or TIF.

“You can’t create new demand by funneling money to corporations,” he said.

Koenig is also particularly proud of initiatives this year that built on his longtime support for tax cuts, of which he said, “The income tax, personal and corporate income tax, are the most destructive taxes toward creating capital and employment in the state…. Income tax is absolutely destructive towards economic growth, so that’s why I think that’s the tax that needs to be cut.”

A 2014 tax cut was the first in Missouri in nearly 100 years and cut the rate from 6 to 5.5 percent, with the first of a five-year phase-in happening this year.  This year, income taxes were cut to 5.1 percent.

Koenig also sponsored a bill to cut the corporate tax rate from 6.25 to 4 percent, the second-lowest in the country. The cuts only get implemented if revenue increases.

At the same time, legislators eliminated what Koenig saw as a tax loophole for companies not located in the state.

But Sen. Scott Sifton, D-Affton, questioned how the state will pay for it all.

“I’m for cutting taxes when you can afford to, but I was concerned it was not revenue neutral,” he told the chambers.

Gregory, a former auditor, took it upon himself to conduct a risk-recovery audit of one state agency, identifying waste and ways to save just like companies do.

But that’s not the view of Democrats, who didn’t side with Republicans on any budget vote.

As evidence, he pointed to the budget cuts, which he sees as targeted toward billionaires: “They talk the talk, but look at the things that have been cut.”

He cited examples including 8,000 severely disabled people who were cut off from home health-care services, which he said would impact people in wheelchairs who need help getting into and out of bed.

To those who would say people who don’t work should not receive any benefits, Burns asked, “How does a person in a wheelchair who is bedridden get to work?”

Rep. Sarah Unsicker, D-Shrewsbury, who represents Crestwood, opposed the Legislature’s potential passage of work requirements for recipients of both Medicaid and SNAP, or food stamps.

“We set the bottom for our lowest of the lows that citizens will accept,” Unsicker said. “Society right now has it set pretty low… Work requirements take it even lower. The SNAP work requirements will literally take food from the mouths of hungry children. It’s terrible that we’re doing this to our people.”

Beck said the budget bills were “fairly decent,” but then Republicans started piling on amendments that he vehemently disagreed with.

One of the amendments created a tax break for yacht owners, but not just any yacht.

“It had to be a bigger yacht to get a tax break — I don’t have to worry about that where I’m from,” Beck joked.

Penalizing the companies and people working hardest in the state and giving perks to the less deserving is a recurring theme Beck senses.

“That’s kind of a microcosm look at the state of Missouri,” he said.

“That would be the lowest in the nation, which I find not good, not at all,” Beck said.

The GOP ended the tax credit for filming movies in Missouri, which Koenig explained with “I’m against any kind of micromanagement of the private sector.”

A study under Gov. Jay Nixon found that more money was going out than coming back in under the film tax credit, but even if the finding had been the opposite, Koenig said he would be against it.

“Even if it came out positive I’d probably be against it just on principle, because it’s not the government’s business to be doing that,” Koenig said. “It’s government’s job to make sure contracts are enforced. It’s not government’s job to pick winners and losers in the marketplace and hand money out to specific businesses.”