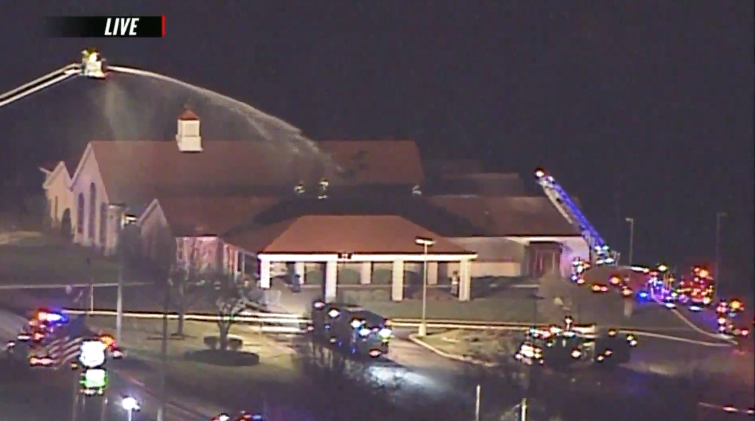 Footage of the fire being extinguished by the Mehlville Fire Protection District. Photo from Fox 2.

The Kutis family is doubling the reward to $20,000 in an attempt to find out who intentionally set a fire at one of the family’s funeral homes in South County in March.

In what police say is a case of arson, someone threw two “fire-starting devices” onto the roof of the Kutis Funeral Home at 5255 Lemay Ferry Road in Oakville in the early morning hours of March 22, setting the roof on fire.

A passing police officer saw the blaze and alerted the Mehlville Fire Protection District, which put out the fire. No one was injured, and a worker who was sleeping in the funeral home overnight managed to get out unharmed.

The typical reward for similar crimes through CrimeStoppers is $1,000, but the Kutis family has been adding to the reward to try to find the arsonist. The family initially increased the reward to $10,000 within weeks of the fire.

The reward is being offered through CrimeStoppers, which offers rewards for solving crimes that can be given out even if the tipster remains anonymous. The group is offering a $1,000 reward if a felony arrest is made.

CrimeStoppers is asking anyone that was in the area of the funeral home between 4 and 5 a.m. the morning of March 22 to give the organization a call.

The group says it has no caller ID, no voicemail and no way to trace an IP address.

Tips can also be sent in through the website stlrcs.org or the app P3 Tips, and those are also eligible for the CrimeStoppers reward.