Inside the courtroom at Stenger’s arraignment on federal charges 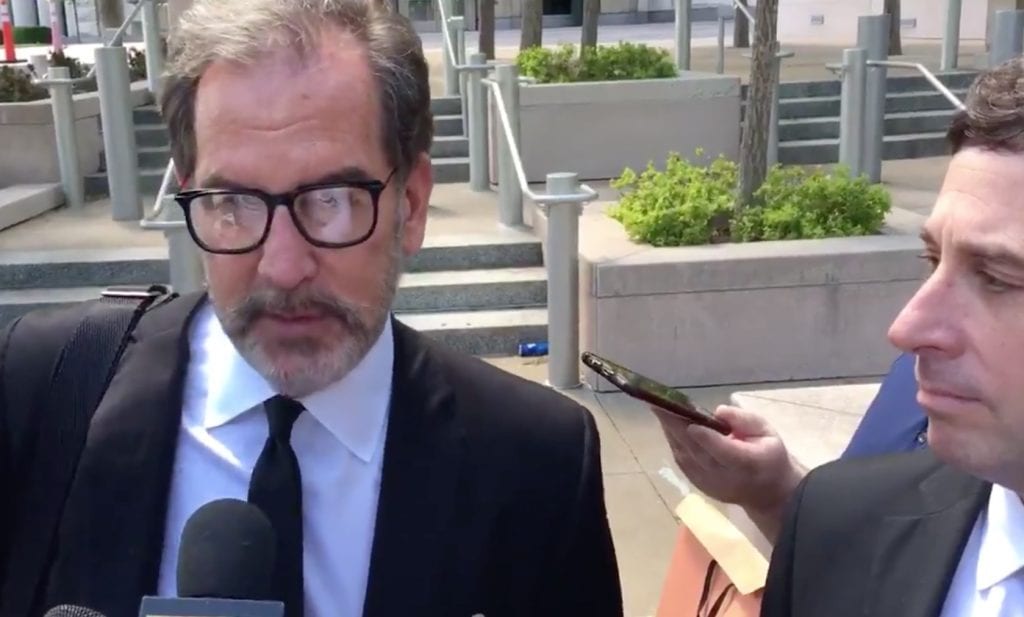 Former County Executive Steve Stenger pleaded not guilty in federal court Monday after being indicted by a grand jury April 25 for a pay-to-play scheme.

Stenger resigned earlier Monday, soon after a 44-page indictment was unsealed charging him with corruption through theft of honest services, bribery and mail fraud.

In his last act after four years and five months as county executive, Stenger submitted a letter to former County Counselor Peter Krane that his resignation “is in the best interest of our county and my family.”

According to a written statement issued Monday from federal prosecutors, Stenger, 47, is accused of five separate schemes to “defraud and deprive the citizens of St. Louis County of their right to his honest and faithful services, and the honest and faithful services of the St. Louis Economic Development Partnership’s Chief Executive Officer, through bribery and the concealment of material information,” from October 2014 to Dec. 31, 2018. He took office Jan. 1, 2015, and was re-elected last year to a second term.

Heading to the Thomas F. Eagleton United States Courthouse in downtown St. Louis f0r his arraignment Monday afternoon alongside his attorney Scott Rosenblum, Stenger was silent but still smiling at times as he was surrounded by reporters for a “perp walk” of sorts as he walked from Rosenblum’s car across Market Street to the federal building.

Ironically, it’s the same street that leads to St. Louis City Hall, where up until six or so weeks ago, Stenger hoped to transfer his base of power to oversee the proposed 1.3-million population St. Louis megacity as its first “metro mayor” if a city-county merger goes through. The plan from advocacy group Better Together included extending Stenger’s term as county executive for another two years unelected, meaning he would have served at least through 2025.

Despite a downfall unprecedented in St. Louis County politics, Stenger appeared calm when he entered the courtroom packed with reporters and spectators for his 20-minute arraignment, Rosenblum at his side. Appearing a few minutes later was the man overseeing the corruption case, Assistant U.S. Attorney Hal Goldsmith.

Other than his silence, the most notable difference between Stenger’s appearance in court Monday and his typical appearance as county executive was his tie. Outside of inaugurations or Election Night victory parties, Stenger rarely wore a tie, even at County Council meetings or on official county business. He headed into court wearing the same blue striped tie he wore the night he defeated Mark Mantovani in the Democratic primary for county executive last August.

U.S. Magistrate Judge Noelle Collins presided over the arraignment. Collins held a bench conference with Rosenblum and Goldsmith before putting Stenger through a gauntlet of questions and remarks regarding the indictment and case against him.

All three men stood in front of Collins at the front of the courtroom, with the former county executive at a podium.

Stenger answered the questions himself, in a voice that didn’t waver, repeatedly addressing Collins as “Your Honor.”

Collins asked Stenger if he understood the charges in the indictment and the punishment they carried: up to 20 years in prison and a $250,000 fine on each count, plus mandatory restitution. Stenger said he understood.

The judge also asked the former county executive a series of questions regarding his personal information, such as his full name — Steven Vincent Stenger — and date of birth. She advised him of his right to remain silent and his right to an attorney at any point during the trial process.

In some ways it was a familiar setting for Stenger, who was a criminal defense attorney before he was county executive. He used to represent clients in federal court, including as a public defender.

The judge also informed Stenger that she would be releasing him without bail on his own recognizance, but that he is not allowed to leave the Eastern District of Missouri, possess firearms or use alcohol or any controlled substance, in addition to pre-trial monitoring and check-ins with the pre-trial office. The judge did not specifically mention that Stenger had to surrender his passport.

But he did surrender his law license.

Collins then moved into the arraignment itself. Stenger — who is accused of repeatedly lying to the public to cover up his crimes — took an oath to tell “the whole truth and nothing but the truth.”

During the arraignment, the judge once again asked Stenger his full name and had him spell his last name, as well as directing him to state his birth date. She then asked him if he was being treated for any kind of physical or mental ailment and if he was under any kind of care with a physician. Stenger replied that he receives weekly injections for arthritis.

Collins then summoned Goldsmith and Rosenblum for another bench conference.

A formal reading of the indictment was waived and Collins turned her attention to Goldsmith, who told the judge that the indictment was the result of a yearlong investigation and that prosecutors have a “fairly voluminous” body of evidence that includes emails, text messages and witness reports.

The judge then told Rosenblum and Stenger that they had until June 13 to file a motion response and that the court would respond by June 20.

Following the arraignment, Stenger was escorted out the back of the courtroom to meet with U.S. marshals.

The attorney said that the investigation was conducted in such a way as not to interfere with the 2018 county executive election, per U.S. Department of Justice policy.

Goldsmith also said that Stenger would be surrendering his Missouri law license. Goldsmith declined comment on whether Stenger had given up his law license in exchange for being released on bond.

And after a brief press conference, former STL County Executive Steve Stenger has nothing to say to reporters or the people of St. Louis County: pic.twitter.com/mQqd42I36G

Emerging from the courthouse with Rosenblum and immediately surrounded by reporters, Stenger chose to let his attorney do the talking for him, ignoring questions like “Why did you resign if you pleaded not guilty?” and “Steve, is there more to this you want people to know?”

Rosenblum said he and Stenger knew the indictment was coming for “quite awhile” and had been in talks with prosecutors.

“We’re familiar with the case, and we plan to orchestrate our next move from here,” he said.

When asked if Stenger was “officially not guilty,” Rosenblum said, “The court responded as the court should.”