Impact of rugby fields up for debate on golf course site 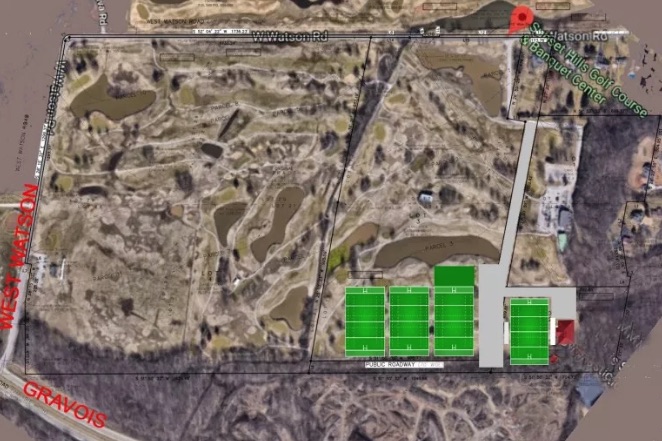 It seemed like a done deal for the St. Louis Bombers Rugby Club to lease part of the former Sunset Hills Golf Course from Sunset Hills, but the athletic fields are now facing 11th-hour opposition from residents who live near the proposed development.

Nearly a dozen residents, mostly from the Tapawingo subdivision in Sunset Hills, spoke at the July 9 Board of Aldermen meeting against the Bombers’ proposed amended development plan to build a three-field rugby park on 15 acres of Stephen J. Bander Park that the club has leased from the city since March.

The neighbors criticized the potential for an increase in traffic, the terms of the lease, the lighting plan and the process the city followed to approve the lease.

“We can’t wait to create this beautiful green space that everyone is going to enjoy,” said Lindbergh High School rugby coach Ron Laszewski, a founding member of the St. Louis Bombers, in opening remarks during the public hearing on the petition.

The plan was unanimously recommended by the Planning and Zoning Commission at its June 5 meeting, where it was moved for approval to the Board of Aldermen by Commissioner Richard Gau, a resident of the Tapawingo subdivision.

Laszewski sought to address one of the most contested aspects of the proposal first, the field lighting, by explaining that the lighting the team planned to use would be the most up-to-date, hooded LED illumination.

Lighting was one of the main topics of discussion at the June Planning and Zoning meeting, with the commission recommending the fields on the condition that a lighting plan be submitted.

“We’re gonna light the field, not the neighborhood,” said Laszewski to the Board of Aldermen. “If you’re outside the park area, our aim is that you have a hard time telling that the lights are on.”

Laszewski added that most rugby matches are usually played in the daytime hours and that lights will only be used for a few practices a week, typically no later than 8 p.m.

Ward 1 Alderman Dee Baebler, who lives in Tapawingo, asked if a traffic study had been done on the potential impact of increased traffic along West Watson Road.

Ward 2 Alderman Steven Bersche questioned if she would be willing to pay for the traffic study herself.

“Would you like to see a traffic study bad enough that you would pay for it?” Bersche asked.

“It’s not my project,” replied Baebler. “But it is important to my residents.”

Public Works Director Bryson Baker agreed that a traffic study would be unnecessary: “For this project, in my professional opinion, is one needed? Probably not,” said Baker.

Ward 4 Alderman Thompson Price pointed out that the area used to draw large crowds for golf tournaments and other events back when it was Sunset Hills Golf Course.

Kermit Starnes was one of the first residents to address the aldermen during the public hearing, denouncing the process that led to the city signing a lease agreement with the Bombers.

“You did it (voted on the lease) when both of our aldermen were not here. Very convenient in my opinion,” said Starnes, referring to Baebler and Alderman Ann McMunn, who also represents Ward 1, which includes Tapawingo and the rugby complex. “You haven’t done anything to make us feel good about what you’re proposing.”

Starnes added that the lease agreement had been discussed and signed in a work session, not a regular meeting, although City Attorney Robert E. Jones later clarified that the meeting where the lease was discussed and agreed, on Feb. 26, was publicly posted as a special meeting.

Mayor Pat Fribis added that the Board of Aldermen regularly meets the second Tuesday of every month, but has the option for an additional meeting on the fourth Tuesday. The city’s website says that fourth Tuesday meetings are work sessions and usually discussion.

Gena Stephens, another resident of Tapawingo, said that the terms of the lease were “pretty ridiculous.” The Bombers will pay $1,000 for the first year of rent, $2,000 for the second year and $3,000 for the remaining 23 years of the lease. After that, the club will have the option of extending the lease an additional 25 years.

“Were we asked to comment on the provisions of the lease?” said Stephens. “I think the residents of Tapawingo would probably lease it for more than you are getting from this club.”

Stephens also said a traffic study was absolutely necessary, since the terms of the lease agree to ancillary uses.

“Maybe at the beginning it’s not going to be a lot of cars, but it’s also been approved in the lease for ancillary uses, which is anything that supports this rugby team,” said Stephens. “That could be a concert that benefits them… There’s really no end to what they can use this park for.”

Craig Kelley was one of the only residents during public comment to speak in favor of the Bombers’ proposal. Kelley said that he plays softball at Fenton City Park, which uses a similar type of new LED lighting that the Bombers plan to use. He encouraged anyone who was curious to visit Fenton to see the lights in action.

“I’ve played softball for 30-plus years. I’ve played under every kind of lighting there is. These lights do not project the ambient light outside… I drove up and I was like, ‘Are the lights on?’” said Kelley. “For the record, I’m in support of these guys. I like seeing all kinds of sports… coming to our locality… I want something to be proud of, and I think these guys will do a good job of that.”

The board did a first reading on the amended development plan, which will get a second reading and final vote at the Aug. 13 meeting.

Prior to the meeting’s adjournment, Ward 3 Alderman Nathan Lipe took a moment to address the board and residents about the Bombers and Laszewski.

“He was selected to the United States National Team… He’s coached Lindenwood University to a national championship… two weeks ago he coached the Lindbergh team to a state championship. This isn’t just some guy, this is somebody very special, and what he’s trying to do… is very special,” said Lipe. “Hopefully we get all the questions everyone has addressed, but he’s a great man.”