Near, probably far, wherever vaccines are is where residents are hunting down any dose 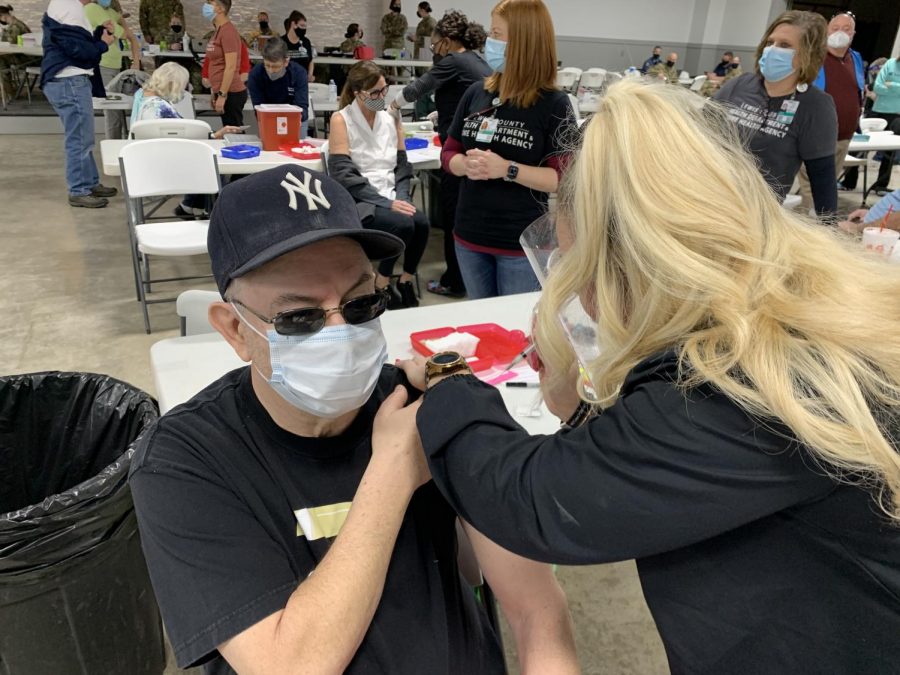 The Call’s General Manager Bill Milligan, left, gets the COVID-19 vaccine at a mass vaccination event Feb. 23 in Canton, Missouri, population 2,377. Milligan traveled from South County, population of more than 100,000, which had not had a single mass vaccine event at press time.

Missouri’s vaccine rollout continues to frustrate St. Louis residents who are driving hours to get the COVID-19 vaccine, as state officials sent mixed messages about whether they would be directing more doses or mass vaccine events to St. Louis.

Even state lawmakers who have asked for data surrounding the state’s vaccine rollout have been stymied, with a GOP lawmaker joining a group of Democratic legislators to ask that information not be delayed by a month or more to legislators who ask for it.

With St. Louis residents over 65 still not finding the vaccine readily available, on March 15 the state expanded eligibility for the vaccine to teachers and “critical infrastructure” workers of all ages in essential industries. Dr. Alex Garza of the St. Louis Metropolitan Pandemic Task Force initially said that the St. Louis region would continue with the first tiers of healthcare workers, first responders and those over 65 before moving on to the next tier, but Gov. Mike Parson said that all areas of the state would have to vaccinate all eligible tiers at the same time. It was unclear at press time which way would win out.

Parson said he would hold more state vaccine events in the St. Louis region by April 1, and direct 50,000 more doses to the region in the coming weeks. But the backlog in St. Louis County alone was close to 300,000 before March 15.

After a dip in the seven-day moving average of daily hospitalization numbers in the past month, those numbers are creeping back up. It’s a worrying sign that the spread of COVID-19 variants could bring an increase in cases even as more people get vaccinated. The state’s numbers have also gone up after a previous decrease.

The Missouri Department of Health and Senior Services found high levels of the UK variant of COVID-19 in testing of wastewater at Coldwater Creek in North County last month. So far, the creek is the only area of the state that shows significant levels of the variants, which mutated from the original COVID-19 virus and spreads more quickly.

Testing conducted in February across the state found low levels of the UK variant in 15 of the 23 locations tested, including Oakville. The state conducted followup testing on the 10 locations that had enough virus present in the water for further tests.

The only South County location in the second round of testing, at the Lemay Wastewater Treatment Plant, tested at 0.1 percent Feb. 16 for the variant, which the state does not consider a detectable level. In contrast, the Coldwater Creek wastewater system tested at 25.8 percent Feb. 22.