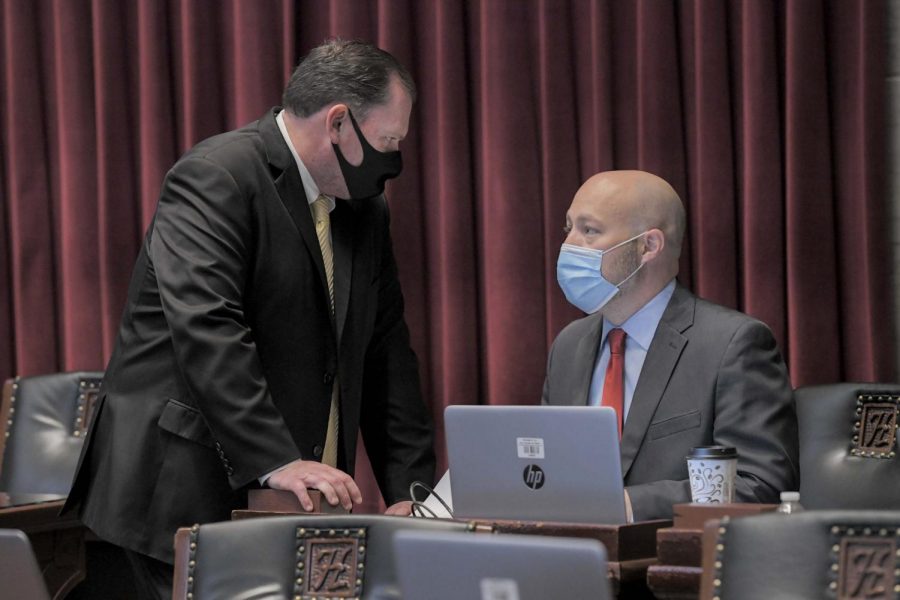 As a new legislative session kicks off, education reform will be a top issue for lawmakers to tackle, Missouri House Speaker Rob Vescovo declared Wednesday.

Lawmakers from across the state returned to the Capitol in Jefferson City Wednesday afternoon, where they swore in members and elected Vescovo, a Republican from Arnold, as speaker.

With the coronavirus still spreading throughout the state resulting in thousands of new cases each day, the first day of the 2021 legislative session felt its impact with normally bustling halls eerily empty and House members sworn in in batches, limiting the amount of people in the Chamber at once.

Outlining his priorities in a speech on the House floor, Vescovo said the perspectives of students — especially those who struggle academically — are often left unheard.

Navigating the state’s education system is a challenge Vescovo said he personally struggled with as a young boy with attention deficit hyperactivity disorder, or ADHD. After being placed in six different schools by the time he reached the seventh grade, Vescovo struggled to grasp concepts like fractions.

Despite support, like from a teacher who helped reframe how he understood math, Vescovo dropped out of school by the time he was 16. After five years learning a trade, he completed his GED and went on to attend college.

“I look at this ‘one size fits all’ approach our system too often takes, and I believe it failed me just as it failed countless of other students each year,” Vescovo said.

To provide more opportunities for the myriad of students who learn in different ways, Vescovo pointed to proposals like education savings accounts.

In general, the education savings account model directs public funds that a school would have received and allows parents who withdraw their students from school to spend those funds instead, like toward private school tuition.

Six states have such programs in place, according to EdChoice, a nonprofit that works to advance school choice. Bills have already been filed to establish a program in Missouri, and Vescovo said a program would “give parents the options to send their kids to schools that will best serve their needs — the student’s needs.”

Advocates of school choice have long-faced an uphill battle trying to expand charter schools beyond St. Louis and Kansas City, and it remains to be seen if similar legislation will gain traction this session.

The pandemic has upended the traditional school year, as students sometimes bounce between in-person and virtual learning as coronavirus cases spike.

As of Wednesday, nearly 391,500 students were enrolled in schools holding classes onsite or onsite with the option of distanced learning, while about 487,100 students were in a hybrid/blended model or completely distanced, according to DESE’s dashboard.

Vescovo’s own children haven’t been in school full-time since March, and he said it’s imperative that students remain in the classroom in order to learn effectively and for their social development.

“That is why we must continue to look at ways to give our schools the resources they need to stay open so that the educational experience is not disrupted for thousands of children,” Vescovo said.

Secretary of State John Ashcroft echoed Vescovo’s comments in a speech of his own, saying that “schools cannot become mere daycare centers warehousing students” and that parents should have more control over the dollars and decisions regarding education.

In a brief address, Senate President Pro Tem Dave Schatz, R-Sullivan, said he cares about school choice and when it comes to the education system, “there are holes in our system that COVID has exposed.”

It was anticipated students would see declines in learning gains with school closures, with some school districts in Missouri reporting failing grades doubling among some grade levels.

In an initial review of assessments taken this fall, the Northwest Evaluation Association, or NWEA, a nonprofit organization that develops assessments for students in pre-K through 12th grade, found that students performed similarly in reading, but students in third through eighth grade performed about 5 to 10 percentile points lower in math.

However, the review noted that students “especially vulnerable to the impacts of the pandemic” were more likely to be missing from the data.

“If we want to better serve the people of our state, we must invest in our young people on the front end, rather than pay the cost of incarceration on the backend when our system fails them,” Vescovo said.

With five months of the session ahead, it remains to be seen how the novel coronavirus may upend priorities in a legislature where COVID outbreaks have previously delayed proceedings.

Due to the pandemic, it will be a day-by-day, week-by-week situation, Schatz said.

“From my perspective, COVID has caused everything to be different,” Schatz said. “For us to think that we can set a real concrete, meaningful agenda early in the process this year might be a little bit far-fetched.”

Outside the Capitol walls, protesters objecting to the certification of the results of the presidential election gathered while nearly 1,000 miles away rioters in support of President Donald Trump forced their way into the U.S. Capitol, causing it to be locked down.

The effects of the riot could be felt in the state capitol, where Rep. Ingrid Burnett, a Democrat from Kansas City, called for a moment of silence in support of the country and Senate Minority Leader John Rizzo, a Democrat from Independence, canceled a scheduled press conference Wednesday afternoon in light of it.

In a statement, Rizzo called rioters “domestic terrorists” who are committing “an act of modern treason against the United States of America.”

“I am calling on all Republican office holders in Missouri to denounce this terrorism and the inflammatory rhetoric spewed from the President of the United States that has led to this moment,” Rizzo said.

U.S. Sen. Josh Hawley has led the effort to oppose the election results’ certification and all but one of Missouri’s GOP members of the House, Rep. Ann Wagner, have said they intend to object.

In her speech declining her nomination as speaker, House Minority Leader Crystal Quade said that if Missouri House Democrats were to assert that they won a majority of House seats in the November election, “you would call us delusional, and you would be right.”

In a press conference, Quade described the mob at the U.S. Capitol as an “armed insurrection” and “violent coup attempt.” Objections to the presidential election results aren’t just delusional but dangerous, Quade, a Democrat from Springfield, said.

“The violence and destruction that occurred today in our nation’s capital is unacceptable,” the statement read. “Peaceful protests are an important part of free speech, but violence can never be tolerated.”

“Refusing to accept the outcome of an election you lose isn’t an American value. It isn’t a conservative value,” Quade said. “It’s what totalitarian regimes do, and embracing that mindset will destroy our country.”

Last month, the House Special Committee on Government Oversight approved a resolution asking Congress to reject the electoral votes of six states won by President-elect Joe Biden if claims of fraud are not investigated. However, the resolution is unlikely to be debated before the full House as the chairman of the House Rules-Legislative Oversight Committee said he would not convene the second necessary hearing.

This article is from the Missouri Independent. The Independent’s Rudi Keller contributed to this story.