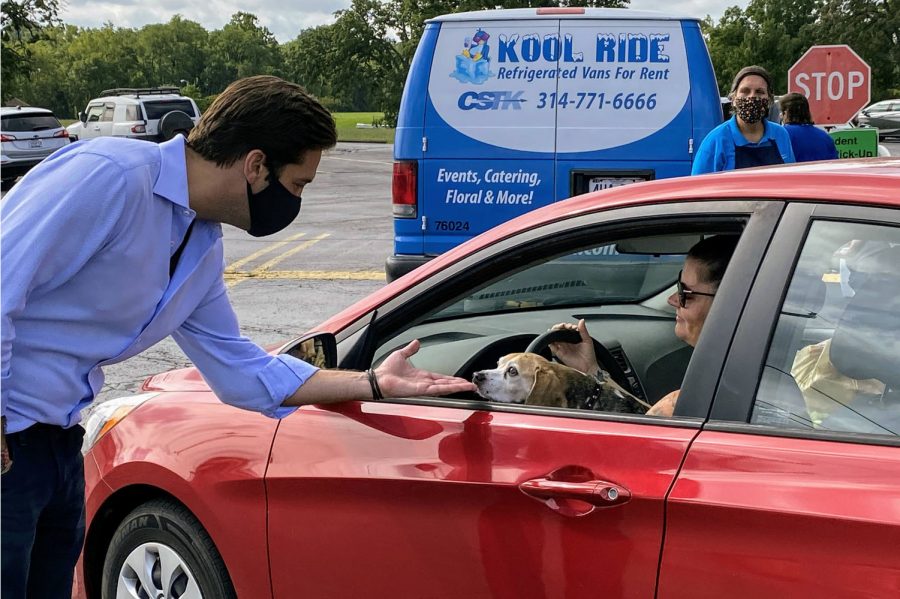 Rep. David Gregory is pictured above meeting a constituent and her dog at a September 2020 food drive event he and Rep. Jim Murphy co-sponsored at Mehlville High School.

JEFFERSON CITY — Owners of pit bulls and some other large dog breeds may soon have more options of where to live, if a House bill discussed Feb. 18 becomes law.

The bill, proposed by Rep. David Gregory, R-Sunset Hills, would ban municipalities from passing breed-specific laws, or BSLs. More than 70 Missouri municipalities have BSLs, according to BSL census. More than 50 of those laws outright ban pit bulls. Columbia does not have a BSL, but a pit bull ban was discussed in 2019. Gregory, who proposed a similar bill in 2020, initially painted the issue as one of government overreach.

“What this bill seeks to do is deregulate governments throughout the state of Missouri,” Gregory said. “It is wrong for a government to come into your home and tell you what kind of dog, by breed, you can have.”

Gregory also cited national statistics on dog bites. Even though there are significantly more pit bulls than breeds such as German shepherds, pit bulls only make up a small plurality of bites, he said. Pit bulls account for 22.5 percent of all dog bites, about 5 percent more than German shepherds, according to data from the American Animal Hospital Association. Rather than BSLs, Gregory said he would like to see municipalities implement vicious dog ordinances and other regulations that prioritize safety regardless of breed.

“This is not a breed-specific problem. This is a dangerous dog problem,” he said.

Rep. Joe Adams, D-University City, agreed with Gregory. He said he has raised many types of dogs that are often seen as less dangerous than pit bulls, but calmer breeds can still bite.

“No breed is immune from biting,” Adams said.

The bill was not without its critics though. Rep. Randy Railsback, R-Hamilton, questioned whether this bill would infringe on “local control.”

Gregory acknowledged that it would, but said it was necessary.

“I default to local control,” Gregory said. That said, if local power is abused “it is incumbent on us to step in.”

Rep. Richard West, R-Wentzville, seemed to take a middle path. He recalled his family’s history of dog breeding and training and his own history in law enforcement.

As an officer, he said he saw a young girl “literally have her face ripped off” by a pit bull, so he supports breed-specific safety regulations but not an outright ban on owning certain breeds.

“I think we might reconsider the wording of this,” West said.

“I think it’s a dangerous slippery slope,” he said.