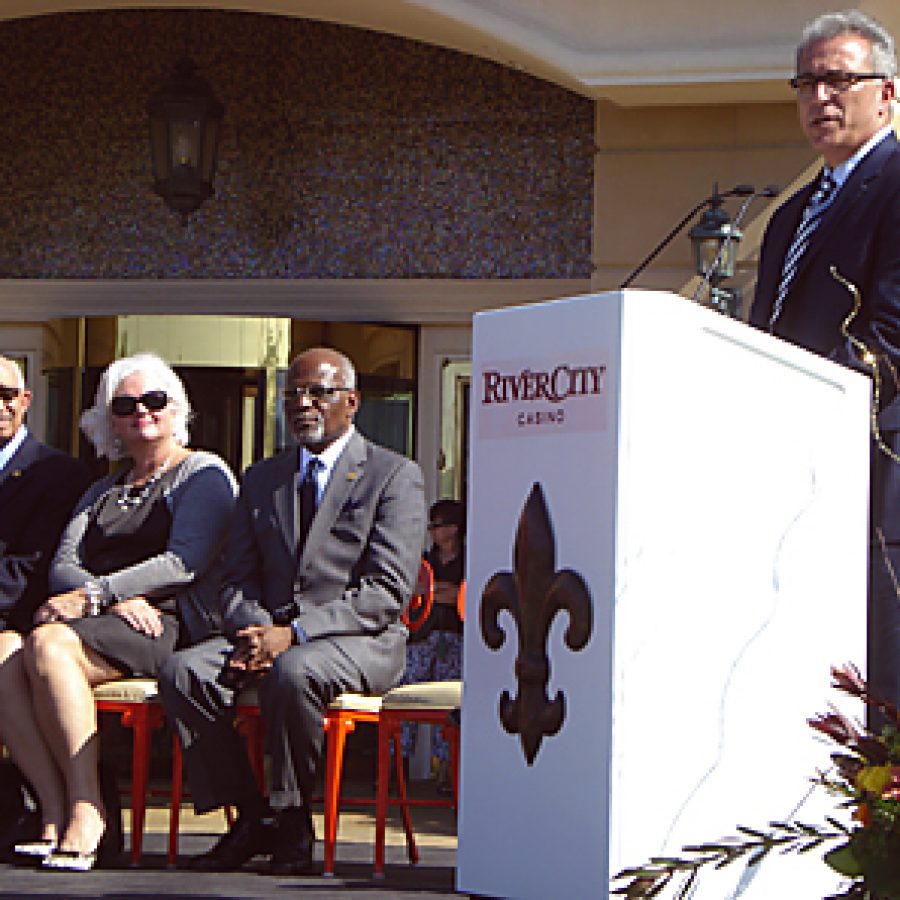 Pinnacle Entertainment unveiled plans this week for an $82 million expansion of its River City Casino in Lemay.

The gaming company plans to add a 200-room hotel, a 10,000-square-foot multipurpose event center and a covered parking garage with 1,700 spaces.

Construction will begin early next year and finish up in the second half of 2013, officials said.

The Las Vegas-based Pinnacle, which also owns and operates Lumière Place Casino and Hotels in downtown St. Louis, said last year a phase-two expansion of River City was contingent on the success of the $380 million casino.

“We believe it’s going to do a number of things,” Pinnacle President and CEO Anthony Sanfilippo said of the expansion at a ceremony Monday outside the casino.

Sanfilippo predicted the project would attract more out-of-state guests to the complex, boosting tourism in south county. He noted the event center would hold 500 people for dinners and 750 people for other entertainment events.

“Some of you may think: What’s 100 jobs? A hundred jobs is 100 jobs that we can say is on the books, and I am grateful for that. Thank you so much,” Dooley said. “Three-hundred-fifty construction jobs — I couldn’t have asked for a better time than right now. We need construction (to) put people back to work. I think that is simply outstanding.”

He added, “Pinnacle, they have demonstrated what a great partner they are in our community. They give back to this community.”

Seventy-five percent of River City’s $4 million annual lease payment to the county Port Authority is being reinvested into Lemay through various economic development initiatives until 2014.

“Over the last year and a half, $4.2 million has been reinvested into the Lemay community with low-interest loan programs and grants for homeowners, starting plans for a new community center, renovating historic property at Jefferson Barracks … bringing down decaying and vacant buildings and adding to our parks and open space and green space and ball fields in the community, plans to re-capitalize an improvement program for commercial properties and to help the entrance-ways into the Lemay community,” county Economic Council President and CEO Denny Coleman said.

The casino, which opened in March 2010, is projected to generate roughly $10 million in tax revenue for the county this year.

It produced $8.4 million in tax revenue for the 10 months it was open last year.

Sanfilippo noted Pinnacle owns and operates several casinos around the country and recently announced it acquired part ownership of a real estate company that’s developing a resort in Vietnam.

But, he added, “… nothing is more important than our investment here in St. Louis.”

Neil Walkoff, senior vice president of Lumiere Place and River City Casino, said, “We are proud of what we’ve accomplished in St. Louis and will continue to be committed to doing those things that will enhance our success in the future.”