Hospitals near capacity as virus surging locally and across state 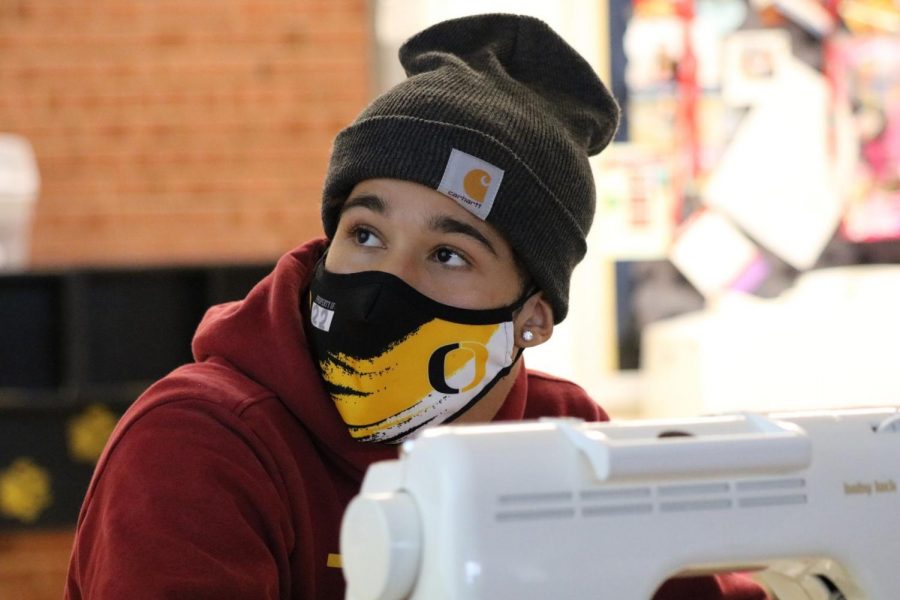 An Oakville High School student sews during class as students returned for two weeks in October-November 2020, before the announcement that they would return to all-virtual learning until January 2021.

St. Louis health leaders appealed to Missouri Gov. Mike Parson to issue a statewide mask mandate and stay-at-home advisory as a surge in COVID-19 cases overwhelms hospitals including Mercy Hospital South, forcing them to turn away patients. But so far the governor has resisted.

If the numbers continue at the current record-setting pace, hospitals will run out of beds in intensive-care units in two weeks, just as officials fear Thanksgiving gatherings will further spread the virus. The number of average daily hospitalizations is now nearly three times what health leaders classify as the “sustainable” level of 40 per day, reaching 125 Nov. 13.

There is “no greater threat to communities and the state” than COVID-19, Dr. Alex Garza, commander of the St. Louis Metropolitan Pandemic Task Force comprised of the area’s major hospital systems, said Nov. 13. Hospitals have “no backup” and “no reserves” if they hit those limits, he warned.

“Make no mistake, we’re at war,” said Garza, who served as chief medical officer for the U.S. Department of Homeland Security after military service. “And right here, right now, the virus is winning that war.”

Although mask wearing has helped keep numbers lower until the last few weeks, “we are past the time when individual behavior alone can address this disaster,” Garza said.

Oakville, Concord and Mehlville have repeatedly been singled out by the task force as the ZIP codes in the 15-county St. Louis region with the highest number of new cases, including last week.

The patchwork of masking policies across the region and the state — or lack of them — is bringing in more and more sick patients, hospital leaders said. Transfers from rural hospitals have had to be turned away. The Mercy system, which includes Mercy South, had to turn away 39 out of 129 requests for patient transfers the week of Nov. 2. Slowing the number of cases allows hospitals to devote more space and time to each patient, which makes for better outcomes.

Missouri added more than 28,000 cases of the coronavirus in the seven-day span that ended Friday — the same number of total cases the state reported from March to July 15. By every measure, that spike in cases is also evident in South County, where the Mehlville School District had to return its high schools to all-virtual schooling in order to keep enough staff, and South County cases hit record highs since the beginning of the pandemic in March.

Hospitalizations in St. Louis County, the region and the state have skyrocketed since Halloween. Without statewide action, doctors fear that Thanksgiving and flu season will bring hospitals to the breaking point.

Parson, a Republican, has so far resisted statewide action, winning election easily over State Auditor Nicole Galloway Nov. 3 after a campaign where he promised to leave any mandates up to local jurisdictions. Parson responded Friday by calling for “personal responsibility,” urging more mask wearing but refusing to mandate it.

Missouri is one of 15 states that doesn’t have a mask mandate. After campaigning repeatedly without a mask, Parson contracted COVID-19 in September.

Garza said that a similar statewide mandate could allow hospitals to stop turning away patient transfers, could get the economy functioning faster and could keep schools operating in person: “The best time to act was really yesterday, but a good time to act is now.”

Facing staff shortages, a Kansas City hospital is bringing in nurses from New Orleans. But more rural hospitals don’t have that option, and hospitals everywhere are competing for staff. The statewide turnover rate for nurses was 19 percent last year, even before the pandemic, according to a nurses’ organization. In a Nov. 6 briefing, Garza likened the staff shortage to a school district with 100 buses but only one bus driver — when that happens, the district in reality has only one bus. Beds can’t count for capacity if there’s no one to staff them.

Although health systems like Mercy laid off and furloughed thousands of workers in the spring, hospital leaders targeted those cuts away from frontline workers.

During the initial wave of COVID-19 in the spring, Dr. Aamina Akhtar, chief medical officer for Mercy Hospital South, said that doctors and nurses at the South County hospital were showered with cakes, cards and support. But the numbers of cases show that some of those same community members have not been wearing masks and staying socially distanced from others, Akhtar said at an Oct. 26 event highlighting health care workers.

“We’re frightened, we’re scared of what’s coming,” she said. “Not to say this lightly or take away from the situation, but for any ‘Game of Thrones’ fans — winter is coming, and what I mean by that is we have our general patient population we’re taking care of, we have COVID, we’re going to get an influx of our annual viral influenza cases and on top of that we still have an increase in the number of COVID cases as people move indoors. … We are going to reach numbers of patients that are going to exceed our capacity to take care of them, not our willingness, not our drive, but simple capacity.”

She encouraged residents to fight against the virus and help those same health care workers they once supported by using masks: “The one thing we do have control over is you put on your face mask. It’s empowering. … You’re saying that I am part of this community and I am going to help take care of my fellow community member. And it’s a very easy thing to do.”