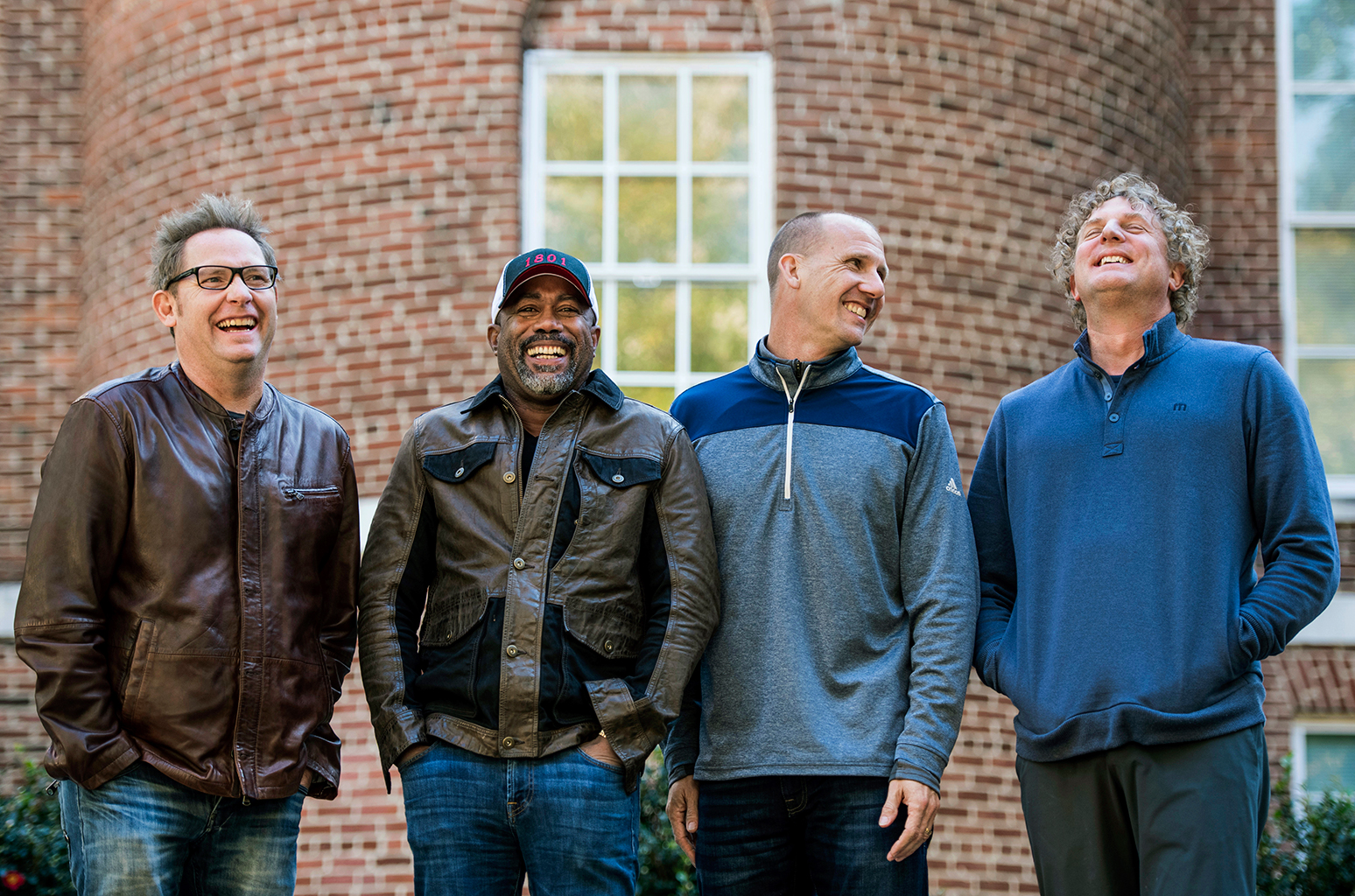 Pictured above: Hootie & The Blowfish. Photo by Sean Rayford.

Hootie & the Blowfish will perform July 13 at the Hollywood Casino Amphitheatre. Tickets start at $32.

Hootie & the Blowfish could easily have coasted to a return after a 10-year hiatus with a tour on which they simply played their hits and fan favorite album cuts from the five albums the group issued during their initial two-decade run.

Instead, the group will release a new studio album to go with part of this summer’s reunion tour. Singer Darius Rucker said the need for new music with the return of Hootie & the Blowfish was obvious to the band.

“I think the main reason (for the album) was for all those people who are really, really diehard fans who just loved the music and just want something new,” Rucker said in a phone interview. “They don’t want us to play 15 new songs in the set, you know, but they want some new music — and for us, for ourselves, for our sanity of doing something new. We haven’t made a new record in 15 years. So I think it’s for us (too), just to play something new.”

The Hootie & the Blowfish reunion has been anticipated for some time. Even as Rucker’s country career took off, he said in multiple interviews that the band would someday tour again and make another album.

It was after the touring cycle for Rucker’s most recent country album, 2017’s “When Was the Last Time,” that things went into motion for the return of Hootie & the Blowfish. Timing played a key role in the choice of 2019 for the big reunion.

“The main reason is this is the 25th anniversary of ‘Cracked Rear View,’” Rucker said, mentioning the band’s blockbuster 1994 major-label debut album. “That was reason enough to get back and go out (on tour) for a year and do the record. And we knew we wanted to do it. We just knew we wanted to do it when the time was right. When we stopped playing, we were putting 8,000 people in a 12,000-seater. And that’s cool and that’s a money maker, but that’s not selling out. So we wanted to do it when it mattered. Now, I’ll be honest with you, I was shocked with ticket sales. I mean, three nights in Columbia (South Carolina), two nights at the Garden (New York’s Madison Square Garden), I wasn’t

expecting that. I think we did it right. We came out when people were really interested in seeing us again.”

Indeed, there seems to have been a reawakening to Hootie & the Blowfish, which includes Rucker (vocals/guitar), Mark Bryan (guitar/piano), Dean Felber (bass/piano) and Jim Sonefeld (drums), in recent years. A January article in “Esquire” magazine may have captured things best, apologizing for how the group was treated in the wake of its history making debut.

If you were a music fan in the ‘90s, you know the story. In 1994, “Cracked Rear View” became as ubiquitous as any album in rock history, selling an astonishing 16 million copies as earnest and tuneful hits like “Hold My Hand,” “Let Her Cry” and “Only Wanna Be With You” were played incessantly on FM radio and became staples on college campuses nationwide.

The band’s solid followup, “Fairweather Johnson,” did reasonably well, moving 2.3 million units. But by then a backlash had started to gain steam, and before long Hootie & the Blowfish were getting branded as the most uncool band going. The group soldiered on, releasing three more albums, while doing decent business on tours until the 2008 hiatus.

As the “Esquire” article – and the sellout business the reunion tour has been doing – suggest, even some of the more vocal Hootie haters now seem to realize Hootie & the Blowfish weren’t that bad after all.

That’s not news to Rucker, who said he believes the fact he continued to play a few of the biggest Hootie hits in his country shows introduced a new generation to the group, which may be contributing to the sellout numbers being generated by this summer’s reunion tour.

He also thinks it certainly hasn’t hurt to have the Barenaked Ladies – another band with a string of hits from the 1990s and into the 2000s – also on the bill.

“I love that lineup,” Rucker said. “When we called those guys, they were so excited. And when it started to come together, I said that’s a great lineup, great music. Neither band is kidding themselves thinking that we’re these bands that are putting out brand new songs that everybody wants to hear or anything. We know we’re a band that we’ve got our hits, and we’re going to go out and play our a**** off. We’ll go have a blast and try to blow each other off the stage and then play a lot of songs together and put on a great show.”

Rucker said Hootie & the Blowfish will vary its set lists on tour, generally deciding what songs – including new material – to play on the day of each show.

The new album, which is being produced by Jeff Trott (songwriter/producer credits include Sheryl Crow, Stevie Nicks and Joe Cocker) came together quite seamlessly from the sound of things, with the band choosing from 80 songs.

Rucker noted that even though the group had gone a decade and a half since making new music, the four band members settled right back into their collaborative writing routine. “It’s so funny for us,” he said. “We can go forever, and when we get in a room together, we’re back in that same dynamic we had since we were 19. So it’s the same thing for us. We write the way we write.”

The band members also wrote with outside songwriters. One notable artist who joined in the writing was Ed Sheeran, who cowrote a pair of songs with Rucker for the new album and a third song that Rucker may record on his next country album. Rucker and Sheeran met well before the latter became a household name to music fans.

“I met Ed before he got famous. He was doing something in the states before the Taylor (Swift) tour. My oldest daughter had discovered him on YouTube and said will you take me to see this kid, Ed Sheeran?” Rucker said.

Sheeran, ironically, didn’t know that much about Hootie & the Blowfish when he first met Rucker, and was shocked when he discovered what that band had accomplished.

“It’s funny, he and I were talking about it because he was from England and he had heard of Hootie & the Blowfish, but (didn’t know about the success of the band),” Rucker recalled. “He was like ‘Holy s***!’ So we were friends for a long time.”

Rucker, who will focus on his country career in 2020, hinted that this year’s reunion won’t be a one-time event.

But the band will have to pick its spots for tours and making more music.

“We can’t do Hootie & the Blowfish every summer. If we’re going to do this, then do it the right way,” he said. “We have to do it like other bands do it. Bands that are at our level and where we are in our career don’t go out every summer. Go out every four years, every five years. Then you do what we just did, sell out every show you play. The Garden calls you and says, ‘Can you play a second night?’”

A celebration of life will be held Monday, July 1, at Kutis Funeral Home, 5255 Lemay Ferry Road. Visitation will be at 9 a.m., followed by a service and interment at Jefferson Barracks.

In lieu of flowers please consider the charities named by Hilda: the Humane Society of Missouri, Salem Lutheran Church or Shriners Hospital for Children.