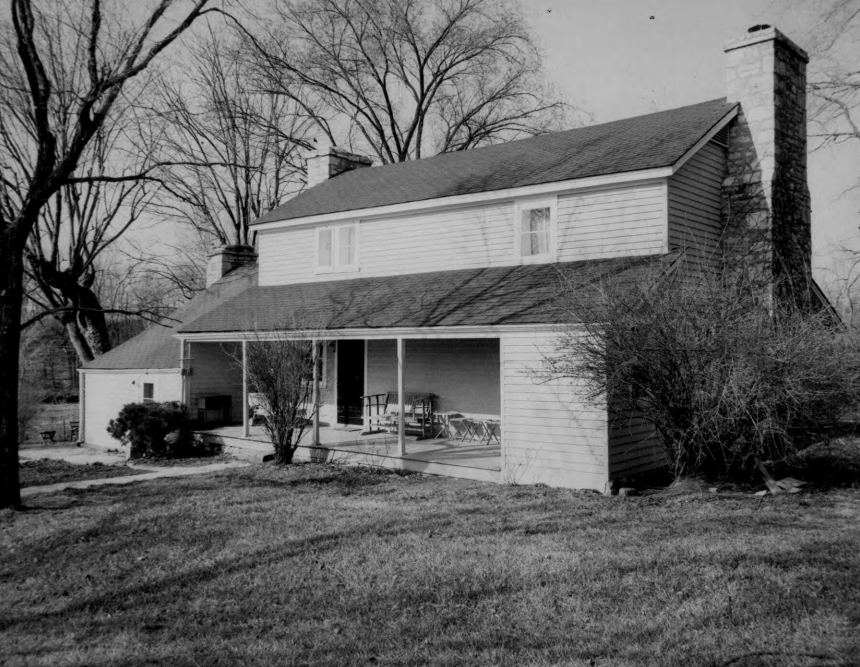 A black-and-white photo submitted in the 1980s to the National Register of Historic Places of the Joseph Sappington Cabin.

The Thomas Sappington Historic Site in Crestwood will get a new addition in the future after the Board of Aldermen voted last week in favor to help partially fund the move of a historical cabin to the city park.

Aldermen voted 6-1 Sept. 28 to help pay part of the costs to disassemble, move and rebuild the Joseph Sappington log cabin from its current location in Affton to its new home in Crestwood.

The vote is the culmination of an effort dating back to March by the nonprofit Sappington House Foundation, which oversees the Thomas Sappington site, and historic preservationists to get the cabin moved. Joseph Sappington was a cousin of Thomas Sappington and the cabin, built in 1816, is currently listed on the National Register of Historic Places.

The city will pay $100,000 for the move and $25,000 for utility relocations. The foundation will raise the rest of the money needed to transport the cabin and hopes it will be open to the public by November 2023.

The cabin’s relocation and rebuild is broken down into three phases. Phase I is the actual disassembly and relocation of the structure, while Phase II is the rebuild. Phase III involves finish work.

Part of the rebuild will include updating the cabin with restrooms, a catering kitchen and a porch for performances.

The Sappington House Foundation will work with Antique Logs Unlimited to disassemble and move the structure. Antique Logs Unlimited was the only respondent to Crestwood’s request for the proposal back when the city was first exploring funding the cabin’s move itself this past summer, after the foundation paid $26,000 for an engineering report to see what it would take to move it. The main feature of the Thomas Sappington site is a stately brick home and the foundation believes the addition of the wood cabin would be an example of two different architectural styles from that time.

Bids were originally scheduled to only stay open for two weeks until the end of May, but the bidding window was extended through June when no bids were returned. Only one bid ultimately returned to the city, the one from Antique Logs, for $475,000 to fully disassemble, relocate and reassemble the structure. The city rejected the bid as too high, citing other expenses not accounted for in the bid price, such as landscaping.

Instead, the Sappington Foundation reached out to Antique Logs Unlimited, who said they would be willing to work with the foundation to move the structure with appropriate authorization from the city.

“My biggest concern is that this project doesn’t get done in time. That there’s unforeseen delays which cause and wreak havoc. … It is a grave concern of mine that ultimately we will be the ones financially responsible for this facility,” Ward 2 Alderman Justin Charboneau said at the ordinance’s second reading. Charboneau has been the most vocal about his concerns with moving the cabin. “It’s not the wisest use of our money. … We only allocate so much each year for capital improvements and now we’re investing a lot in this when we should invest in the property we have.”

Charboneau also pointed out that once the cabin is disassembled and moved, it will lose its status on the National Register of Historic Places.

Ward 4 Alderman John Sebben, who has been a member of the Sappington House Foundation, said it was inevitable that the cabin was going to lose that status, whether it moved to Crestwood or not.

“This thing is coming off the National Register list no matter what. There’s no way around it. Even if they moved it perfectly somewhere else. It is coming off the list and that is sad but there is nothing we can do about that,” Sebben said.

“Besides the history component being comparable to the existing Sappington House, this is an opportunity that was almost dropped in our laps. Obviously there was a lot of work done since that moment, a lot of concerns that came out of that,” said Sebben. “I believe this will work based on the enthusiasm and the faith that the foundation has in this. … There is a strong community between the historical houses in this area … so there is a safety net there. I have full faith this will be a success.”

A fundraising concert will be held Oct. 9  from 4 to 7 p.m. at the Sappington House musuem to help raise money for the move.