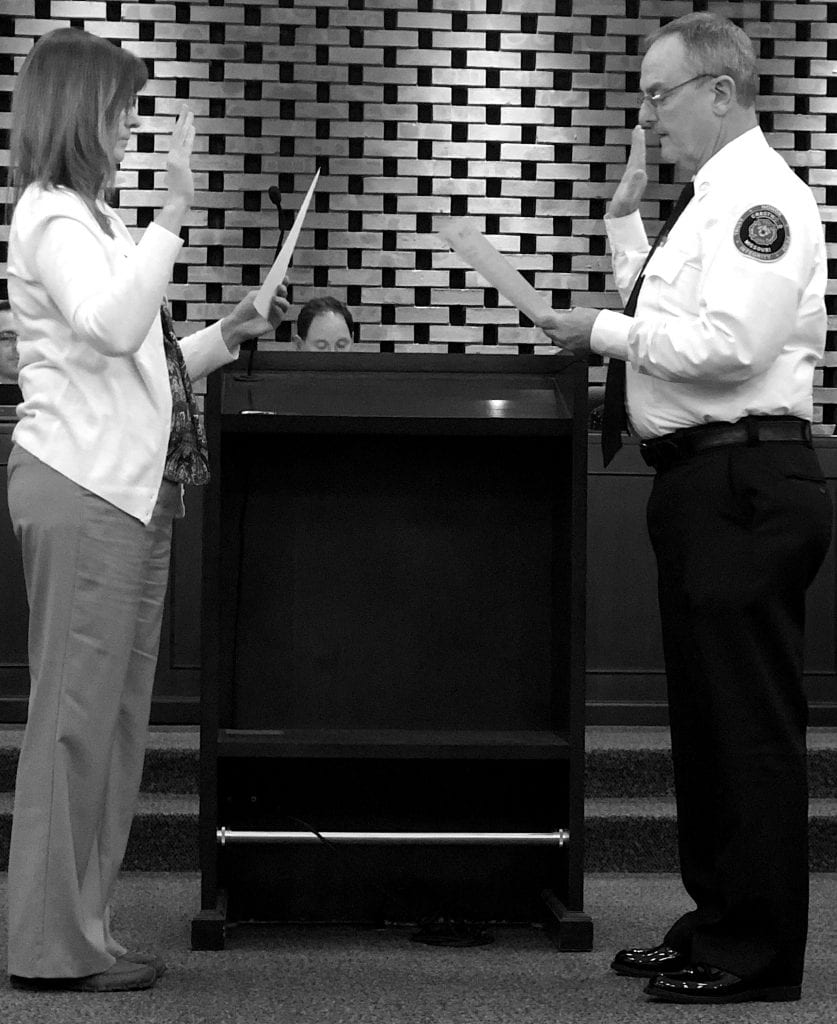 City clerk Helen Ingold administers the oath to new Fire Chief Lou Hecht at the Crestwood Board of Aldermen meeting Nov. 13. Hecht is taking over the role of fire chief after former Chief David Oliveri moved to Washington state to become fire chief of the town of Anacortes. Photo by Erin Achenbach.

It’s official — Lou Hecht is the new fire chief for the city of Crestwood.

The Crestwood Board of Aldermen unanimously approved an ordinance at its meeting last week promoting Assistant Fire Chief Hecht to fire chief of the Crestwood Fire Department. He will take over the position from former chief David Oliveri, who moved to Washington state to become fire chief of Anacortes. Oliveri’s last day with Crestwood was Oct. 31.

Hecht, who served as assistant fire chief of Crestwood for 18 months, was strongly recommended by Oliveri to take over his role. Hecht internally applied for fire chief and went through interviews with an internal promotion panel that City Administrator Kris Simpson was a part of, as well as hosting a “town hall” with the city’s firefighters. The feedback from the firefighters and internal promotion panel was positive, and Simpson offered the position of fire chief to Hecht, pending board approval.

“Hecht served many, many years with distinction with the Fenton Fire Protection District,” Simpson said at the Nov. 13 meeting. “The support was unanimous for recommending Assistant Chief Hecht to be promoted to the position of fire chief…I wholeheartedly recommend him to the Board of Aldermen. I know he’ll do an outstanding job for the city of Crestwood.”

“When I was speaking with Chief Oliveri on his way out, he gave his highest recommendation that Hecht be promoted to this position,” said Ward 3 Alderman and Crestwood Mayor elect Grant Mabie.