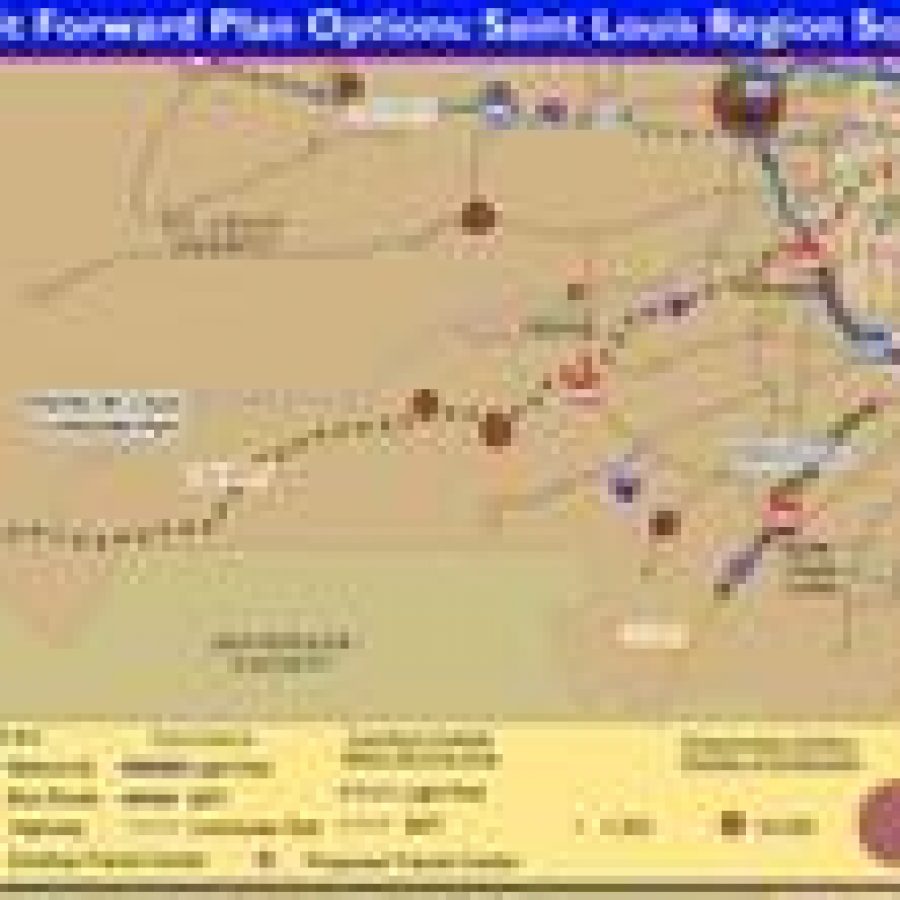 Metro's long-range plan includes possible rapid bus and light-rail lines into south county, contingent upon funding and the discretion of the East-West Gateway Council of Governments.

County voters on Tuesday will consider Proposition A, a half-cent sales-tax increase to support public transportation that proponents say will help restore, enhance and expand light-rail, bus and van service throughout the St. Louis region.

Prop A is expected to generate roughly $75 million to $80 million a year — depending on the economic climate — to be appropriated by the county to the Metro transit agency. It also would trigger a quarter-cent sales tax increase in St. Louis city, which was approved in 1997.

The language on the April 6 ballot states, “Shall the county of St. Louis impose a countywide sales tax of one-half of one percent for the purpose of providing a source of funds for public transportation purposes including the restoration, operation and expansion of MetroLink, MetroBus, disabled and senior transportation, in addition to an existing sales tax of one-quarter of one percent for the same purpose?”

Neither the Prop A ballot language or the county ordinance that placed the measure on next week’s ballot contain a sunset provision for the sales tax, which means it would be levied in perpetuity if approved.

Besides financial support from its riders and the Missouri and Illinois state governments, Metro already receives funding every year from sales taxes collected by both the city and county.

A trigger of the 1997 quarter-cent sales tax through Prop A’s passage would generate roughly $8 million in additional revenue for Metro from the city.

In the county, the agency receives 50 percent of the revenue from a half-cent transportation sales tax, which dates back to 1973, and revenue from another, quarter-cent sales tax that county voters approved in 1993, half of which is used for operation of MetroLink and half is set aside for future MetroLink construction. The other 50 percent of the 1973 half-cent county sales tax funds road repairs.

Facing a budget shortfall after Prop M’s defeat, the Metro Board of Commissioners voted to raise fares, eliminate hundreds of jobs and discontinue 30 percent of light rail, MetroBus and Call-A-Ride paratransit van service for the elderly and disabled.

However, Metro’s restoration plan will end in May unless the agency secures permanent and stable funding.

If Prop A fails next week, Metro officials have warned of additional service reductions. But should the measure pass, Metro would proceed with its long-range plan, Moving Transit Forward.

The plan, endorsed by both the Metro board and the East-West Gateway Council of Governments, sets five-, 10- and 30-year service restoration, enhancement and expansion goals for the transit agency.

Metro officials say their first priority would be to further restore the bus, light-rail and van routes that were cut last year.

From there, Metro would pursue expansion projects at the direction of East-West Gateway, the region’s planning authority. In the first five years, Metro could instate two new Bus Rapid Transit routes, begin planning for one new light-rail line and implement new passenger amenities, such as swipe-able smart card ticketing systems at bus and MetroLink stations.

By the 10-year mark, the agency could have one MetroLink extension up and running, as well as additional rapid bus routes. In 30 years, Metro envisions opening two additional light-rail extensions and a commuter rail line from Alton, Ill., to Pacific — the latter contingent upon the construction and support of a high-speed rail line from Chicago to Kansas City.

As for south county, the plan recommends MetroSouth, a light-rail line that ex-tends from the existing Shrewsbury Metro-Link station to Butler Hill Road, possibly connecting halfway with SouthSide, an ex-tension into downtown St. Louis.

The plan also provides for a possible rapid bus route that would extend from downtown St. Louis along Interstate 55 to Meramec Bottom Road.

However, the Moving Transit Forward plan assumes strong local, state and federal financial support. Passage of Prop A next week, proponents contend, would give Metro the local funds needed to match federal grants for mass-transit projects.

If voters approve Prop A, Metro will be bound to a contract with the county in order to receive annual appropriations of the sales tax revenue. Under that agreement, the agency would not pursue expansion projects unless those efforts receive federal funding. Metro also would submit to and pay for performance audits of its management every three years.

Chesterfield Mayor John Nations, head of pro-Prop A group Advance St. Louis, recently told an audience at a Clayton Chamber of Commerce forum that passage of the half-cent tax increase would help Metro build a mass-transit system that creates jobs, benefits the environment and makes the St. Louis region competitive with other markets nationwide.

“We are about creating jobs and enhancing the quality of life throughout St. Louis County,” Nations said. “The fact is, in order to do that, you’re going to have to have public transportation. It not only serves our businesses and serves our … educational institutions, it empowers people to access the workforce.

Asked why Prop A does not contain a sunset provision, Nations said, “The fact of the matter is, if you look at the proposal and you look at Metro, they need a permanent funding solution in order to provide the services throughout the region. They’ll never have a long-term plan if they don’t have a long-term funding solution. Metro … has no taxing authority of its own, and it relies on the funding sources from the jurisdictions which it serves.

While the agency says it carries more than 50 million passengers every year, Sullivan, citing U.S. Census data, contends only about 28,000 people in the St. Louis area use the transit system to get to work.

Sullivan has said Metro’s long-range plan is similar to others that have been disseminated before elections with transit sales-tax measures on the ballot, dating back to 1994, but were forgotten about afterward.

Citizens for Better Transit, which opposes Prop A, believes Metro should concentrate its funding on expanding bus service, which would cost less, rather than new MetroLink extensions.

More than 150 individuals and organizations have endorsed Prop A, such as the St. Louis County Municipal League, state Rep. Sue Schoemehl, D-Oakville, Schnucks Markets, BJC HealthCare and the League of Women Voters of St. Louis.

But the St. Louis County Republican Central Committee came out against Prop A.

The Oakville Township Republican Club, in its own resolution against the measure, contends Prop A isn’t a “good or efficient use of Oakville taxpayers’ moneys.”

“As an organization, we are generally in favor of mass transit for the St. Louis area … but Prop A is just a bad economic proposal,” Oakville Republican Board Chairman Kurt Witzel stated. “There is no firm commitment in the ballot language to do anything other than give an additional $80 million taxpayer dollars to … Metro without any assurance that they will do anything to keep or expand current service for the citizens of South St. Louis County.”