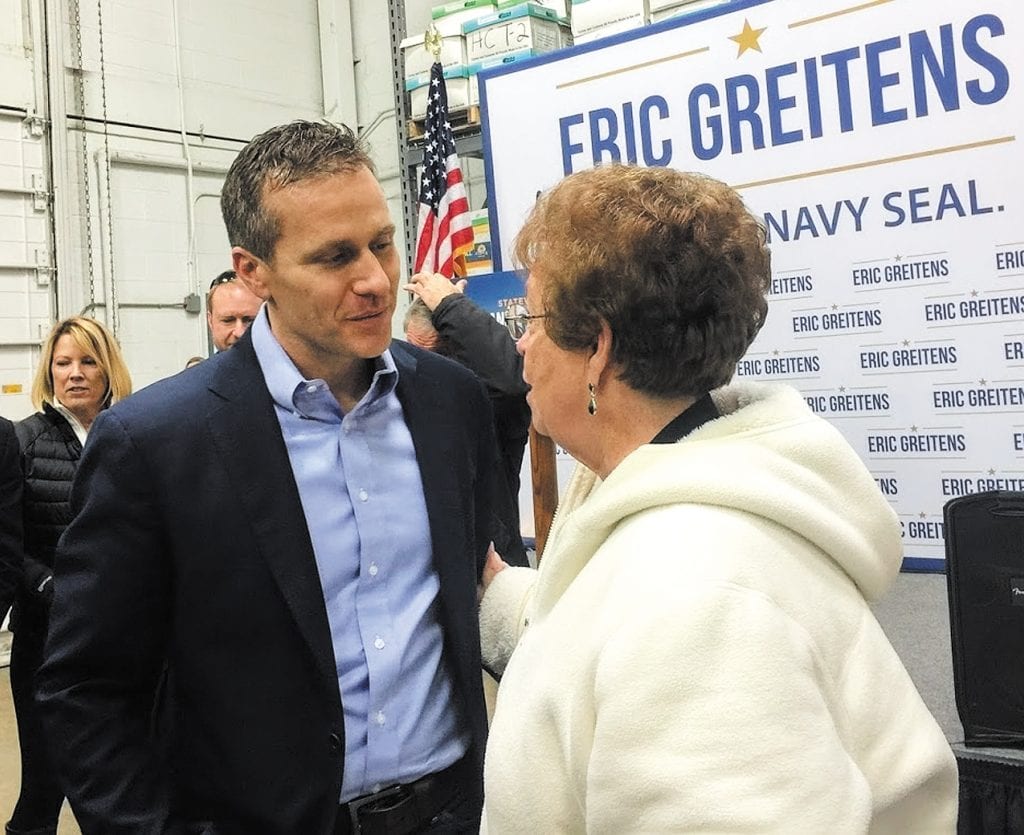 Here’s a recap of the events of last week in Jefferson City. See this article for more information on new Gov. Mike Parson.

Gov. Eric Greitens’ once-meteoric political rise crashed last week as he resigned from office after months of pressure in a deal in exchange for dropping one of his felony charges.

Greitens’ resignation at 5 p.m. June 1 came after four months of scandal consumed Missouri’s political landscape. In January, Greitens admitted to having an extramarital relationship, but he has refused to comment on the woman’s allegations that he took a partially nude photograph of her, bound and handcuffed in his basement, as blackmail. A felony invasion-of-privacy charge related to that case was dropped but could be refiled. A charge in a separate computer-tampering case related to Greitens’ campaign finances is the one dropped in exchange for his resignation.

“This ordeal has been designed to cause an incredible amount of strain on my family,” the 44-year-old Rhodes Scholar with a degree in ethics from Duke University said as he announced his decision to step down at the state Capitol. Standing alone, his voice cracked as he addressed Missourians from the office he vacated a few days later.

Greitens was succeeded Friday by Lt. Gov. Mike Parson, who is also a Republican.

“It is clear that for the forces that oppose us, there is no end in sight,” Greitens said. “I cannot allow those forces to continue to cause pain and difficulty to the people I love.”

Those “forces” include the St. Louis Circuit Attorney’s Office and the special Missouri House committee investigating the governor.

A grand jury indicted Greitens in February for invasion of privacy. In the wake of the charge, calls for his resignation began trickling in from members of the Missouri General Assembly. Rep. Marsha Haefner, R-Oakville, was one of the first GOP lawmakers to call for his resignation.

Soon after news of the criminal charges broke, the House Investigative Committee on Oversight formed, and started looking into those allegations as well as Greitens’ possible unlawful use of a nonprofit donor list for campaign fundraising. St. Louis Circuit Attorney Kim Gardner also charged Greitens with felony tampering with computer data in relation to those claims, but dropped it after Greitens’ attorneys approached her with an idea for a deal.

The governor has repeatedly dismissed both the circuit attorney’s and the Legislature’s investigations as a “political witch hunt,” a charge Gardner denied when she announced the deal, which her office called a “fair and just resolution.”

And in Greitens’ final speech as Missouri’s 56th governor, he maintained his innocence.

“I know, and the people of good faith know, that I am not perfect, but I have not broken any laws or committed any offense worthy of this treatment,” Greitens said.

The grip of the investigation tightened around Greitens after the House announced it had subpoenaed him to testify this week.

By May 29, the day of Greitens’ announcement, it had grown even tighter.

Meanwhile, the House committee took over three hours of testimony from former Greitens campaign aide Michael Hafner, who stated under oath that “the governor and his team were untruthful to the Missouri Ethics Commission about that donor list.”

No sooner had the committee adjourned than the governor’s office announced a surprise press conference. By 4:30 p.m., Greitens had resigned.

The special committee was knee-deep in a special legislative session that could have resulted in Greitens’ impeachment.

While Rep. Jay Barnes, chair of the investigative committee, would not comment Tuesday about whether the process has ended, the House website listed previously scheduled committee meetings as canceled.

“Innocent people don’t resign and criminals don’t get let off the hook simply because they cut and run,” said Sen. Gina Walsh, D-Bellefontaine Neighbors. “Missourians deserve to know what laws were broken, what lies were told, and how deep the corruption went.”

Although Kendrick said he’s not sure whether the House investigation can or will continue, “the people of Missouri deserve an investigation into” A New Missouri.

Other lawmakers were relieved.

“The governor’s announcement marks the conclusion to a drama that has drawn on for far too long,” said Sen. Mike Kehoe, R-Jefferson City, the Senate’s majority floor leader. “It is regrettable the state of Missouri is in this position, but far more regrettable would have been for this spectacle to continue to drag on.”

Greitens remained steadfast in his own defense.

“I will let the fairness of this process be judged by history,” he said.

The Navy SEAL-turned-politician, who once had his sights set on Washington, D.C., closed the brief news conference with a military metaphor: “For the moment, let us walk off the battlefield with our heads held high.”

True to the form of his 16-month tenure, Greitens took no questions from the gaggle of reporters crowded into his office as he disappeared behind a closed door for the last time.