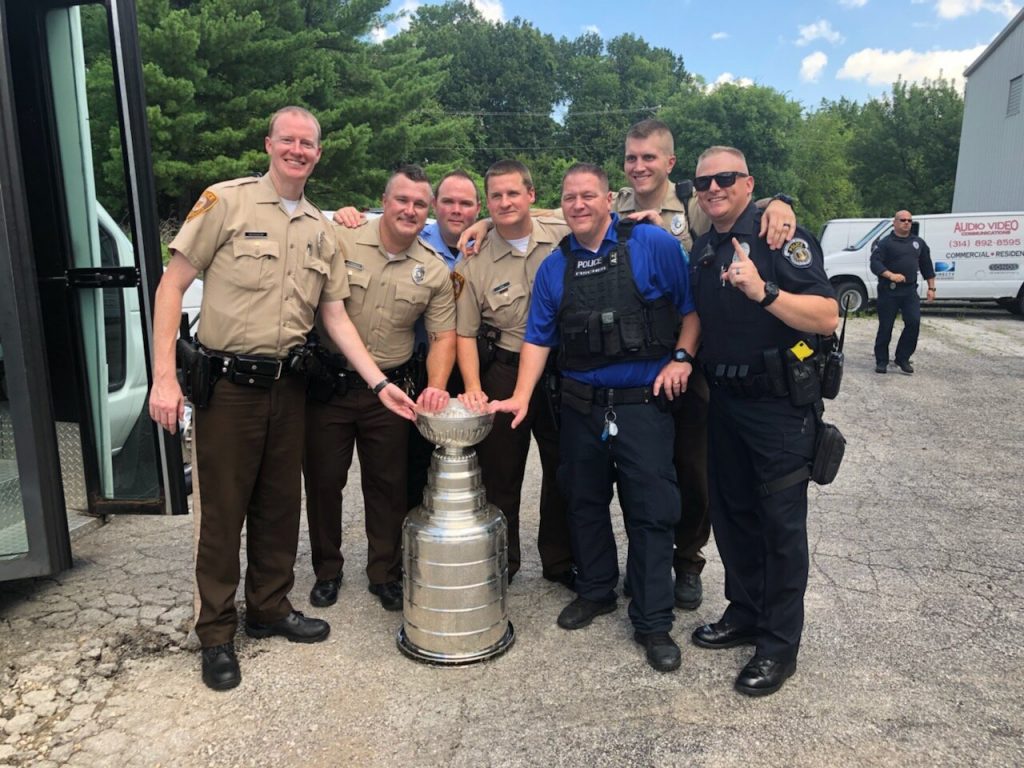 Former Blues player Pat Maroon started off his day with the Stanley Cup by taking photos with his family at his home in Clayton. Maroon then paid a visit to All American ice rink in Green Park, where St. Louis County Police officers, including Green Park Officer Jeremy Hake, posed for photos with Maroon and Stanley. After eating toasted raviolis from the Cup at Charlie Gitto’s on The Hill, Maroon then finished the day on a lake to the west of St. Louis with family and friends, and a private concert from country star Adam Sanders.

As it has throughout its entire existence, the city of Green Park will continue to contract with the St. Louis County Police Department for police services for the next five years.

The city has two dedicated police officers based out of Green Park City Hall for shifts during daytime hours, as part of a unit based out of the Affton Southwest Precinct, the 3rd Precinct. The Board of Aldermen approved the new contract in April with only a few minor changes. Aldermen approved the pact 5-1 withWard 1 Alderman Michael Broughton opposed to the extension.

The contract was set to expire May 31, but the pact was extended by another seven months to align the contract in the future to Green Park’s fiscal year, which runs concurrent with the calendar year Jan. 1 to Dec. 31. The Police Department said this was done as a “courtesy to the city” to make it easier for accounting purposes.

Lt. Aaron Schafer represented the department at the meeting, Green Park’s first city meeting held by videoconferencing due to the COVID-19 pandemic: “For decades we’ve provided police services to the city of Green Park, and we’re appreciative of this opportunity.”

The contract includes a 5-percent cap on increases, and in a new twist, it is auto-renewing so that Green Park won’t have to vote each year for a new contract. The county Police Department has been switching its full-service city contracts like the one for Green Park to auto-renewing, and Schafer said cities appreciate the convenience of not having to vote on the contract each time it’s up. The change “has made the renewal process easier, and it’s been well received by our partners as well,” Schafer said.

The contracts still have a clause so they can be terminated in any year by either one of the parties with six months’ notice or service changed with two months’ notice.

The department will be switching Green Park’s patrols to “contract patrols,” guaranteeing a certain number of patrols in the city limits. The patrols will be documented. Previously, Green Park had served as a percentage of a regular beat, but precise records of that weren’t necessarily kept.

That is partly in response to Broughton’s objections to Green Park’s second officer, who was added in 2017 with funds from St. Louis County’s new sales tax Proposition P. This time, Broughton said he only wanted to approve the first seven months of the contract to give the city options in case sales taxes crash due to the COVID-19 pandemic. The city relies on sales and utility taxes for all its revenue since it does not have a personal property tax.

But City Administator James Mello said he would prefer for aldermen to approve the contract now and then make the decision later if necessary to back out of the contract under that clause included in the contract.

“We can back out at any time for any given contract year,” Mello said.