Developers not getting information to panel far ahead of time 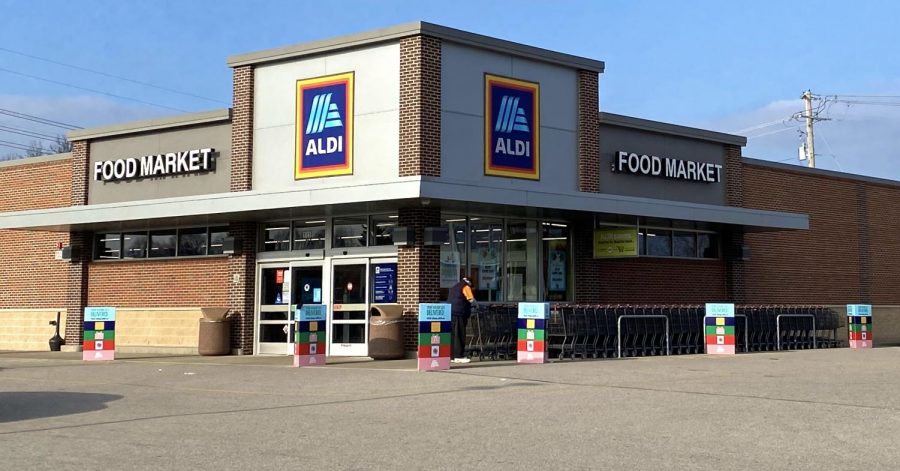 The Aldi on South Lindbergh Boulevard could get a facelift after the Green Park Planning and Zoning Commission heard a proposal last month for a final development plan that would expand the existing grocery store.

The Planning and Zoning Commission ultimately decided to postpone discussing or taking any action on the presented amended final development plan for the Aldi at 11185 Southtowne Square because the city had not yet had the time to review the plans.

Aldi is proposing expanding its current store an additional 2,050 square feet. The upgrade would include a new store entrance and updated signage and other outward features. The building was only built in 2016 to replace the smaller original store across the street, but the facelift is part of a nationwide undertaking by Aldi to update and standardize the grocery chain’s stores.

“From a civil standpoint, the site will remain mostly the same except for the expansion. The entrances from the public roadways will remain the same. … Most of the utilities are already in place,” said Yosef Howley of Civil Engineering Design Consultants. “In terms of land use, the land use is the same. It’s just an expansion. Really the main impetus is to provide an increased level of service for shoppers at this Aldi store.”

However, before the Planning and Zoning Commission could discuss the proposal, City Engineer Derrick Madej said that the city was still waiting to receive a final checklist of several items from the applicant, including conceptual approval from the Metropolitan Sewer District and Mehlville Fire Protection District, a revised parking lot expansion plan and a revised photometric plan.

Additionally, the proposed plan by Aldi showed that the expansion would eliminate seven existing parking spaces. The site requires 126 parking spaces and currently holds 118, said Madej. Eliminating seven additional parking spaces would bring the number to 111, which would require the petitioner to submit a statement of need to the city in addition to the parking plan.

From that point, discussion focused on whether the city should revise its deadlines for developers to give the planning panel more time to review ahead of its meetings.

“We did not have a chance to look at the information submitted or review the revised plan today before the meeting” because the plans had been submitted that day, Madej said at the November planning commission meeting.

“So we’re really not ready at this point?” asked Mayor Tim Thuston.

City Administrator James Mello told the board that while Madej had not had a chance to review the revised plans, the planning commission could still advance the plans to the Board of Aldermen under the assumption that the revised plans address the listed concerns.

“I think we probably should have a little bit more time to look. That’s quite a grocery list,” said Thuston. “I’d like to make a motion. Why don’t we give Derrick some time to look this over? There’s an awful lot of issues in the amended development plan. I’d really like to table it to the next meeting.”

“Is there some way we can put a deadline prior to having all materials provided? This isn’t the first time this has happened,” said Van de Riet. “It just seems to me that we’re wasting everybody’s time, including those who are presenting to us, that we don’t enforce a deadline.”

“A lot of these are minor and can be resolved before the Board of Aldermen meeting, but it’s your prerogative whether you’d like to have those answers resolved before you make a recommendation or not,” said Mello.

Van de Riet replied that if the commission was trying to make informed decisions, it would benefit from having all necessary materials beforehand with enough time to review it.

“I feel like we’re kind of just passing our responsibility if we just say, ‘Hey, board, you can pass it if everything is in line with Derrick (Madej).’ It just seems to me we ought to have time for feedback,” said Van de Riet. “That’s what we’re here for.”

Commission Chairman Gary Neutzling echoed Van de Riet’s comments, adding that he felt the commission had been “passing the buck” too often.

“In this particular case, since we tabled it, I would say they have more than enough time to iron out the comments and replies,” said Neutzling.

“We have other things we could be doing other than prematurely presenting without having all the answers on it. It’s not fair to the board to be passing something to them,” said Thuston. “Planning and zoning isn’t really functioning as planning and zoning should. That’s not planning and zoning’s fault. I don’t think they have sufficient information or enough time for review.”

Madej suggested that materials should be given to the Planning and Zoning Commission at least a week in advance of the commission’s monthly meeting to give commission members time to review future proposals.

“The plans should be sufficient enough for you to review for zoning. It may not have every comment addressed, but the minor comments are simple. The major comments are hard to discuss or review prior to the meeting,” said Madej. “If Friday before Wednesday’s meeting is sufficient for you guys, then I think that would be appropriate.”

“We’ll have to have a talk about that and get this straightened out,” said Thuston, directing Mello to return the revised Aldi proposal to the commission within two weeks, two weeks prior to the December commission meeting.

“In theory we have it (the revised proposal), it’s just unreviewed,” said Mello. “Any time frame you want to set is fine, it’s your prerogative.”

The Planning and Zoning Commission was slated to discuss the amended final development plan Dec. 1.