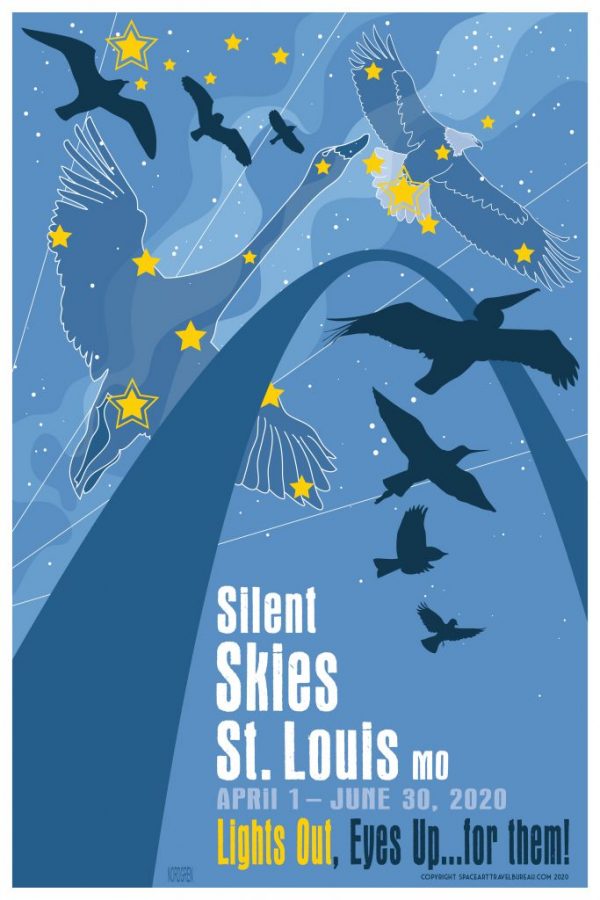 The Gateway Arch has gone dark for two weeks to help migrating birds.

“The beginning of May is the peak time for birds migrating north for the summer,” says Pam Sanfilippo, chief of museum services and interpretation, Gateway Arch National Park. “The first two weeks of May, we will turn off the Gateway Arch’s exterior lights to avoid the possible disorienting effect of the monument’s upward lighting on birds that migrate at night.”

The exterior lights will be turned back on beginning Friday, May 15. The monument will be lit nightly through the summer.

Other organizations around St. Louis that are turning their lights off for bird migration include The Planetarium, St. Louis Zoo, Metropolitan Square Building, Bank of America Plaza, Ameren, Nestle and Colliers International.

Gateway Arch National Park remains temporarily closed due to the COVID-19 health situation. NPS is working with federal, state, and local authorities to closely monitor this rapidly changing situation. Gateway Arch National Park will notify the public when it resumes full operations via traditional media, as well as online at nps.gov/jeff and gatewayarch.com and on social media (@GatewayArchNPS).

As the air gets warmer and the days grow longer, the likelihood that you’ll see birds migrating through St. Louis heading north for the summer also increases.

“More than 325 different species of birds migrate along the Mississippi Flyway, a north and south corridor that goes through the middle of North America,” says Erin Hilligoss-Volkmann, director of education for Gateway Arch National Park. According to Audubon, nearly half of North American bird species and about 40 percent of waterfowl spend their lives within the Mississippi Flyway.

Hilligoss-Volkmann, known as “Ranger Erin,” says birds are able to navigate and find food, water and shelter by using the Mississippi River and its tributaries as guides during much of their journey. “Ruby-throated hummingbirds have recently arrived in the St. Louis region, heading to their breeding grounds after spending the winter in Central America or Mexico,” she says. “Many species of warblers are moving north after overwintering in Central America, including an Audubon ‘priority bird,’ the prothonotary warbler.”

Priority bird species are birds of significant conservation need, for which our actions, over time, can lead to measurable improvements in status.

You can learn more about some of the birds migrating through the Gateway Arch National Park grounds with this video of the “Silent Skies” mural, brought to you by St. Louis Arts Chamber of Commerce. The mural is a 678-piece collection of 8-inch by 8-inch squares of all the endangered birds of the world. Due to the current health situation, the mural is now virtual and available in a video format.

Here are other ways to learn about bird migration: