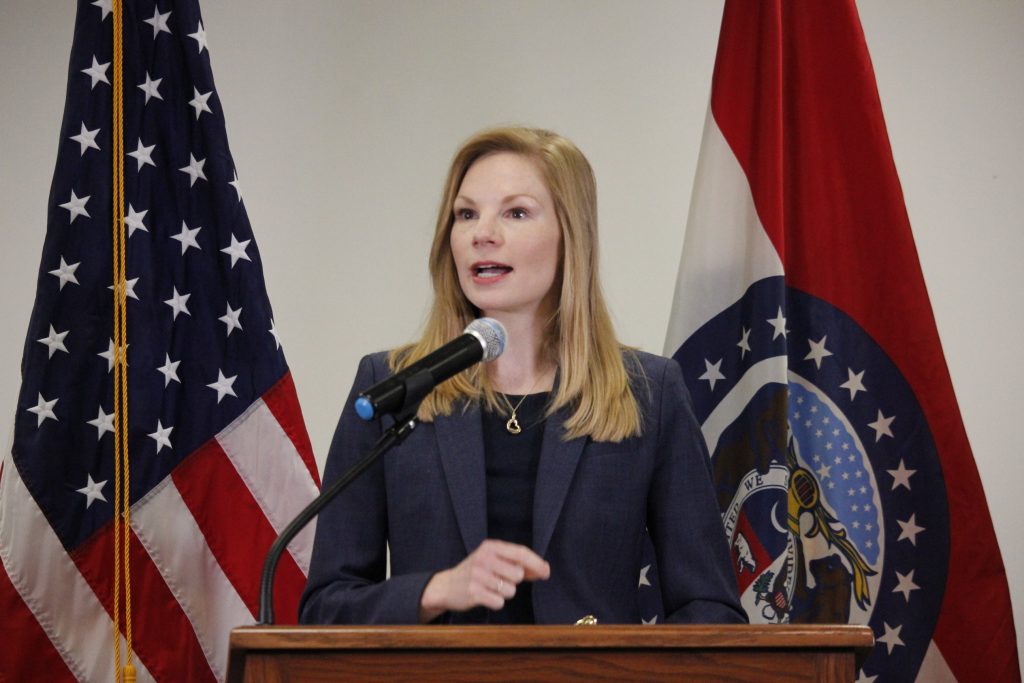 Missouri State Auditor Nicole Galloway announces that she will perform an audit of St. Louis County at the St. Louis County Library headquarters May 15, 2019, after the County Council voted unanimously to approve an audit May 7. Former County Executive Steve Stenger requested an audit of the county two years ago, but then-council Chairman Sam Page, now the county executive, declined.

Missouri State Auditor Nicole Galloway announces that she will perform an audit of St. Louis County at the St. Louis County Library headquarters May 15, after the County Council voted unanimously to approve an audit May 7. Former County Executive Steve Stenger requested an audit of the county two years ago, but then-council Chairman Sam Page, now the county executive, declined. Photo by Erin Achenbach.

The St. Louis County Council declined to take then-County Executive Steve Stenger up on his request for a state audit two years ago, but after his downfall on federal corruption charges, Missouri State Auditor Nicole Galloway will conduct an audit starting this month into county contracts and finances.

Ironically, Stenger called in 2017 for Galloway to look at how the county handles contracts, but Galloway said at the time that state law only allows her to come into the county with permission from the council. That legislative body, led by now-County Executive Sam Page, declined at the time to seek a state audit.

But that changed after Stenger’s April 25 indictment on bribery, theft of honest services and mail fraud. The council voted unanimously May 7 for the audit.

The audit could cost the county hundreds of thousands of dollars, but council members said they believed it was worth it in light of how they now know Stenger conducted county business.

In federal court at his guilty plea hearing May 3, Stenger admitted that he commanded department heads and St. Louis Economic Development Partnership CEO Sheila Sweeney to direct county contracts to his donors, both for actual work and sometimes for nonexistent work. In a 44-page indictment, federal prosecutors outlined how Stenger ordered Sweeney to get the board of the St. Louis County Port Authority, which she also headed, to agree to a phony $100,000 contract for businessman John Rallo, who donated $10,000 a year to Stenger. Rallo faces the same charges as Sweeney, and Sweeney pleaded guilty May 10 to helping Stenger conceal his crimes. Stenger and Sweeney could both face prison time.

Considering that background, the significant cost of an audit doesn’t deter 3rd District Councilman Tim Fitch, R-Fenton, who said it should have happened in 2017.

“I would say with the amount of money that was wasted by the previous county executive with those contracts, that would be money well spent,” Fitch said.

Galloway said members of her public corruption team will meet with Page, the council and federal prosecutors starting this month to figure out what areas of the county to audit.

Due to the abuses outlined in the federal indictment, she will focus on contracts, the Economic Partnership and the Port Authority. She is encouraging anyone with tips on where to look in county government to call her whistleblower hotline at moaudit@auditor.mo.gov or calling 1-800-347-8597.

Galloway won’t know how long the audit will take until that fieldwork starts and the scope of the audit is determined. She promised her investigators will do a forensic audit and a performance audit “looking at how this was able to occur for so long.”

The auditor announced her audit in St. Louis County.

“The corruption of the Stenger administration deeply eroded the public trust,” she said. “This audit will provide a road map to allow officials in the county to begin to regain that trust.”

The team from the auditor’s office is “specially qualified to root out fraud and abuse” and will provide a “full accounting of taxpayer dollars,” handing any evidence over to law enforcement, Galloway said: “I fight public corruption every day. Whenever there is that breach of taxpayer trust I want to fight that and make sure that it cannot happen again.”

Although Stenger took a federal plea deal that protected him against any more federal charges for actions he took while in office as county executive, there could be state charges from his time in office. Galloway noted that more than 40 criminal counts have been brought against officials due to the state auditor’s office’s audits.

A few council members, some new to the council and some who were there in 2017 when Stenger called for an audit, said they wished the council had taken him up on his offer at the time. But they said the decision to not move forward with a state audit came from Page, who considered Stenger’s call for an audit a “stunt.”

But Page said if he had to do it again, he might do things differently.

“It looked to me to be an exercise that wouldn’t lead to a productive end at the time. Knowing what I know now, i don’t know, maybe I’d go back and take my chances,” Page said. “Knowing what I know now, i wouldn’t have even had a conversation about the transportation department, I would have said no, audit the Department of Administration and procurement and grants and by the way, go over the Partnership.”

When Page talked with Galloway about the audit in 2017, she told him that even though the council had to officially ask for the audit, the scope of it would be decided by Stenger. The then-county executive wanted her to look into the county Department of Transportation and how the county awards road and bridge contracts, but Page said he would have liked to have cast a wider net.

“So even though we could ask the auditor to come, we could not give them direction on where they went,” Page said. “I was concerned it would give a false sense of security or may not uncover anything that may need to be uncovered. At the time, we didn’t understand the depth of what was going on.”

But Galloway said the blame for not conducting an audit at the time lies squarely with Stenger, not Page or the council. Galloway, Page and Stenger are all Democrats.

Echoing Galloway’s statement she had released the day Stenger was indicted, the state auditor said, “Steve Stenger did not take action to initiate an audit and made it clear there was no real intention of providing a full accounting of taxpayer dollars… I think the fault lies with Steve Stenger, quite honestly. It was under his leadership that the resolution did not pass or was not brought forward.”

Asked why it didn’t happen in 2017, Galloway said, “So Stenger never asked. I think that’s an important clarification.”

But Stenger wrote in a letter May 18, 2017, “Dear Ms. Galloway, I am writing to request that your office conduct a comprehensive audit of St. Louis County’s process for procuring road and bridge contracts and the St. Louis County Council’s process for awarding such contracts. I believe all aspects of the process should be audited…. The entire process needs to be looked at by an independent party… I will urge the St. Louis County Council to join me in this request for a resolution. My administration is committed to transparency and openness in government. We look forward to actively participating… and in reviewing any recommendations from the auditors.”