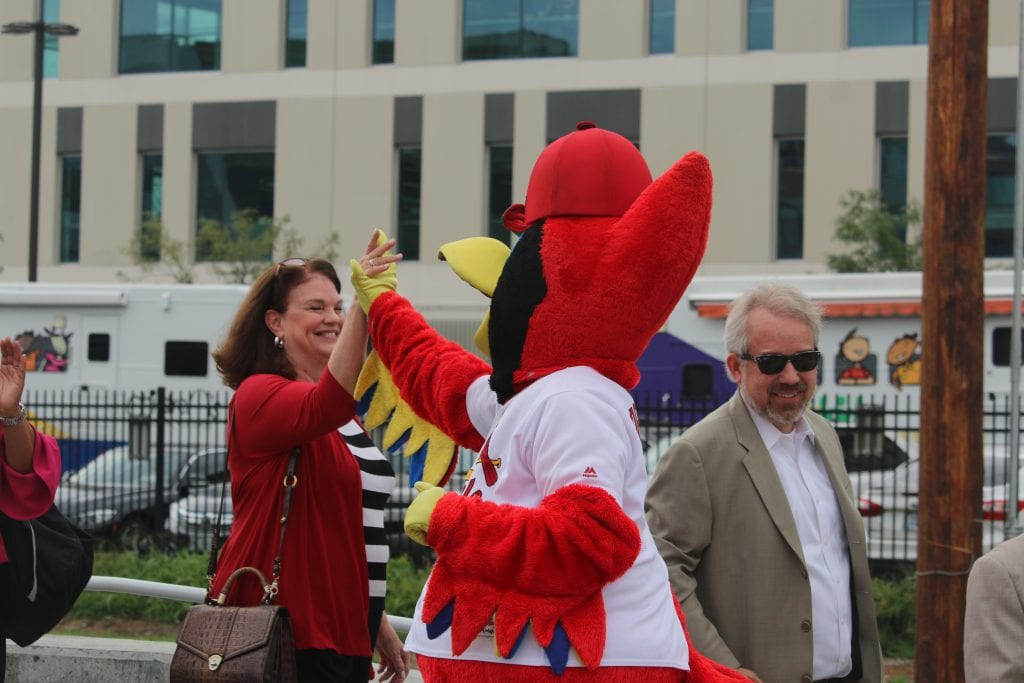 The ribbon was officially cut last week on the first new MetroLink station in a decade at the Cortex Innovation Community, on the exact date the St. Louis region first opened MetroLink 25 years ago.

MetroLink first opened July 31, 1993, and its latest $15 million light-rail station, the 38th, is unique in several ways. It is the first MetroLink station in 10 years, and it’s opening at the Cortex Innovation Community, which has served as a center of innovation and growth in the city. It is Metro Transit and the bi-state region’s first public-private partnership to fund a MetroLink station. And it celebrated its official opening alongside the official debut of a new pedestrian and bicycle trail, the Chouteau Greenway, that was funded by city-county trail district Great Rivers Greenway.

Dozens of leaders from the area attended or spoke at a dedication ceremony for the new station at the Cortex Commons. It also marked likely the last major public ceremony for Metro’s outgoing President and CEO John Nations.

Both St. Louis County Executive Steve Stenger and St. Louis Mayor Lyda Krewson were notably absent, sending representatives instead. Stenger has publicly feuded with Nations about security on MetroLink. Stenger, who had a scheduling conflict, sent his Senior Policy Advisor Tom Curran to the event. Krewson was represented by Deputy Mayor for Development Linda Martinez.

But despite the absence of the region’s top leaders, there was no shortage of remarks from Nations and other officials in a ceremony that pushed the hour mark.

“The Cortex MetroLink Station and Chouteau Greenway project is a regional, collaborative effort to make St. Louis and the bi-state area a better place to live, work and play, to operate a business and to raise families. It is a prime example of what we can do when we work together towards a common goal,” Nations said at the celebration.

This is the region’s first transit project to be funded through a public-private partnership.

“I take some personal pride and ownership this morning because I was very proud to help bring the $10.3 million Tiger Grant, federal Tiger Grant, to make this public-private partnership a reality,” U.S. 1st District Congressman William “Lacy” Clay said.

The new station is located between the Central West End and Grand MetroLink stations. The Cortex Station becomes the light rail system’s 38th MetroLink station and provides a new, convenient transportation option for the thousands of employees and visitors in the central corridor of St. Louis, where parking is at a premium.

“These are two truly transformative projects that will connect St. Louis to the future by connecting all kinds of people from all walks to life to exceptional job opportunities right here at Cortex,” Clay said.

The first quarter-mile section of the Chouteau Greenway has been constructed on the north side of the Cortex Station between Boyle and Sarah avenues. When the entire five-mile greenway is completed, it will offer individuals, groups and families the opportunity to walk or ride bicycles from the Gateway Arch all the way to Forest Park on a paved, accessible path safely separated from street traffic.

“This is the first project for Chouteau Greenway … Our goal isn’t just to connect Forest Park to the Arch, but to create access to the communities north and south and to create a place of  diversity and unity and to create a place where people of St. Louis have common ground and access to our cultural institutions, to our medical centers, to our educational institutions and to the great parks and greenways that our in our region,” Great Rivers Greenway CEO Susan Trautman said.

Curran attended the event to represent Stenger’s office and acknowledge the 25-year anniversary of light rail in St. Louis.

“In the 25 years that have passed since Bi-State Development first opened light rail in St. Louis, MetroLink has literally provided millions of trips from employment centers to recreation, health care centers,  St. Louis Cardinals and St. Louis Blues games,” Curran said. “It is part of the fabric of the St. Louis community. What a wonderful way to celebrate this anniversary, with the opening of this beautiful station.”