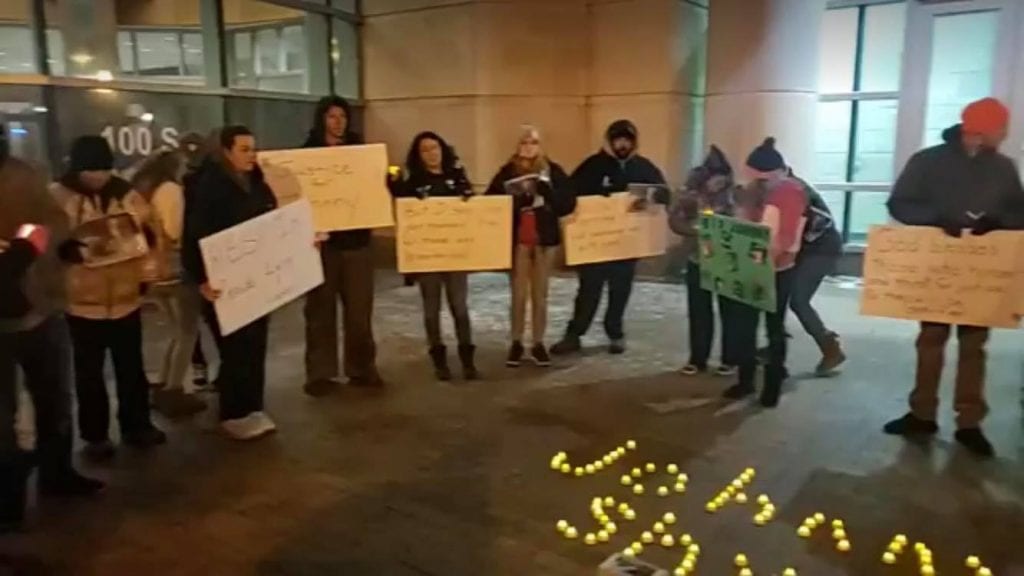 Johnny Shy's friends gather for a vigil outside the Justice Center in March 2019 after Shy's death in the jail.

Multiple investigations are ongoing into practices at the St. Louis County Justice Center after another South County man died after going into the jail — the fourth inmate to die this year.

Daniel Stout III, 31, of Affton, died within an hour after being transferred from the county jail to the Eastern Reception, Diagnostic and Correctional Center in Bonne Terre, which is about an hour from the Clayton facility.

Stout is the fourth inmate to die after going into the St. Louis County jail, following Larry “Jay” Reavis, 54, of Des Peres, in January; Johnny Shy, 29, of Oakville, Feb. 23; and Lamar Catchings, 21, of North County, Feb. 28. Both Shy and Stout died of intestinal bleeding, while Catchings died of undiagnosed leukemia. The jail had no deaths last year.

A coalition of civil rights groups, including the ACLU of Missouri, the Arch City Defenders, the MacArthur Justice Center and Metropolitan Congregations United, last week sent a letter to new County Executive Sam Page questioning the transparency and openness of his investigations so far. In response, Page pointed to his county executive report from last week, in which he outlined what he’s doing to prevent any future deaths.

The coalition noted in its letter that Shy and Stout died while brought back to jail on parole violations after drug convictions. The groups said a federal court has ruled Missouri’s parole revocation system unconstitutional, so perhaps the two South County residents should not have been in custody in the first place.

“A parole violation should not be a death sentence,” MacArthur attorney Megan G. Crane wrote to Page.

The deaths of Shy and Catchings happened under the administration of then-County Executive Steve Stenger, who could serve time in federal prison after resigning and pleading guilty to federal corruption charges. Shy’s mother has not been ready to speak publicly about her son’s death, but Catchings’ mother Tashonda Troupe has attended nearly every council meeting since her son died to ask officials to find someone responsible and reform the county’s justice system.

At Stenger’s last meeting as county executive, he got into a back-and-forth exchange with Troupe and her sister Natasha, who were not satisfied with his answer that the county had to wait to take action until the Clayton Police Department completed its investigation. As one of his last acts as county executive, he appointed the St. Louis County Police Department’s Lt. Col. Troy Doyle to take over the Department of Justice Services from interim director Julia Childrey, who earned the ire of the Troupe family because she didn’t talk with them after Catchings’ death.

Troupe’s attorney Mark Pedroli filed a lawsuit against the county March 1, saying that documents were withheld from the family after the death that should have been provided through the Sunshine Law.

Page said last week he suspended three employees pending a full investigation after Stout’s death, although at press time it was unclear if that was for Stout or the others. He also said he had “removed, suspended or reprimanded problematic nurses and other employees.”

He applauded the work Doyle has already done creating a more formal organizational structure and improving efficiency, but said he would launch a nationwide search for a permanent director and a search for a full-time medical doctor to work in the jail.

“But we can do better and we will do better,” Page said. “Simply put, the Justice Center is not good enough.”

Page personally visited the cells where the inmates died and read their autopsy reports. He also personally met with the jail’s accrediting team, which sped up its required review at Page’s request. As a doctor, he said he realizes how important communication is between care providers, and he has taken steps to strengthen communications between jail nurses and doctors at St. Mary’s Hospital, where Shy was taken twice the day he died.

Among the concrete changes, guards now check on inmates more often. Catchings died about 10 hours before his body was found in his bed after a guard skipped a required check. Both guards and inmates can now request that an inmate receive medical care. The infirmary manual was updated and cameras will be installed in the medical wing. All jail policies, which the Troupe family said they had trouble getting after Catchings’ death, will be posted online.

County Prosecuting Attorney Wesley Bell announced last month that he would not file charges in the deaths of Shy or Catchings.

The Clayton Police Department, which conducted the investigation because the jail is in Clayton, recommended filing charges of involuntary manslaughter against the two jail nurses who were on duty at the time Shy died. One of the nurses, who Bell referred to as “suspects,” declined to talk with police.

When the County Council held a hearing into the issue under Stenger, the county’s lawyers refused to allow employees to speak about what happened in public due to the threat of lawsuits.

Bell has not yet released his findings, but he said he expected the recommendations would include lowering the jail population and hiring more staffers to deal with serious medical conditions. He said what he found at the jail was “troubling,” but it didn’t rise to the level of individual culpability needed for a criminal conviction on involuntary manslaughter.

Page got applause from Catchings’ family and friends of Shy’s when he said during his county executive report at last week’s council meeting that he is systematically going to “try to set a new course” at the jail by changing the culture and improving systems to try to prevent any medical disasters from happening again.

Page, who is a medical doctor and practicing anesthesiologist, started by listing the many encounters jail medical staff has with patients, 92,819 in 2018, including 23,895 intake assessments and 46,000 nursing visits. And the inmates the jail takes in are much sicker than the general population, with 37 percent having a drug problem and 28 percent with a mental illness requiring medication.

With that in mind, he noted that he asked Clayton police to investigate whether there is a “pattern of deficiencies” at the jail.

Page also announced a slate of appointees to the Justice Services Advisory Board, a little-known panel that appears not to have met in years at the time of the jail deaths. Appointees include former inmate and former Sen. Jeff Smith and Rev. Phil Duvall.