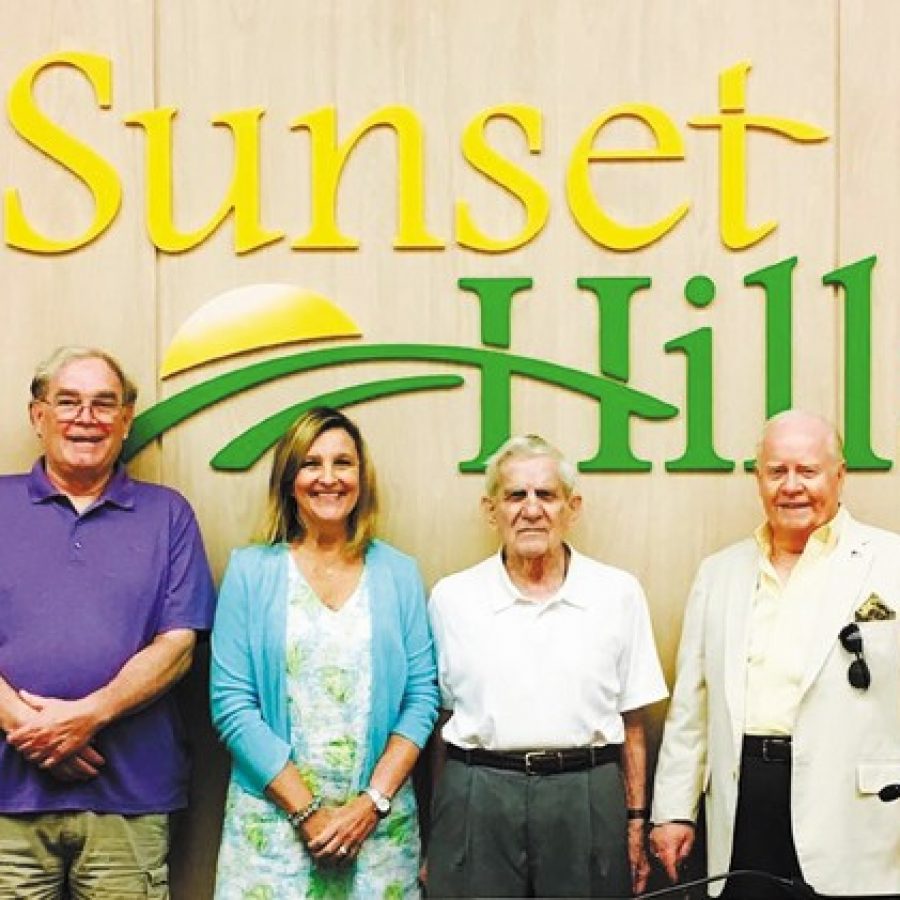 Vogel served 14 years as an alderman and eight years as mayor, along with service on the Police Advisory Board and the Board of Adjustment. He was first elected as an alderman in 1978 and served four terms as mayor, from 1992 to 2000.

Besides the mayors and LaGrand, other current and former city officials at the event included Lay, Ward 1 Alderman Dee Baebler, former Ward 4 Alderman A. Ron Kaemmerer and former Ward 3 Alderman Jan Hoffmann, who retired last year after serving since 1991 as the longest-serving alderman in the city’s history.

The message on the cake at the reception read, “Ken, thank you for all your years of distinguished service. You will be missed!”

Kenneth Vogel is pleased with the progress Sunset Hills has made since he first was elected mayor in 1992.

Under his leadership, the city has achieved financial stability with balanced budgets and grown to nearly 8,000 people from less than 5,000 as the result of four successful annexations.

Vogel, who last month was elected to his fourth term as mayor, plans to build on the city’s successes and now is focusing on obtaining more citizen involvement from the recently annexed areas as well as increasing recreational opportunities for residents and adding green space.

As positions become vacant on city committees, Vogel said he intends to fill some of those posts with residents from the annexed areas.

“I’m trying to bring in more people into committees,” especially residents from the newly annexed areas so they can have a voice in city affairs, the mayor said.

“We’re going to do more with the parks system I want to do more park areas. That’s one place where you actually have people getting out to meet other people in a big way from the rest of the city,” he added.

Overall, Vogel is pleased with the way the city is operating today and the outlook for the future. But that wasn’t always the case.

After serving seven terms as an alderman beginning in 1978, it was his opposition to a proposal to have a city administrator run the city’s day-to-day operations that prompted him to seek the mayoral post in 1992.

Despite his opposition to the city administrator proposal, seeking the mayor’s post was not a decision he made lightly. “I sacrificed my (aldermanic) seat in doing it, so it was a big decision,” Vogel recalled.

But given the voters’ decision, he obviously made the right decision in seeking the post and residents have given him a vote of confidence four times now.

As mayor, Vogel believes his most important achievement has been the development of the Plaza at Sunset Hills. Before the revitalization, which still is under way, the shopping center was deteriorating with empty stores. “It was just a disaster for about 18 years, 20 years,” he said.

The Plaza at Sunset Hills was revitalized with the assistance of tax-increment financing. In a TIF district, tax receipts for fire districts, school districts and other taxing entities are frozen at current levels until the TIF obligation is retired. As land within the TIF district increases in value, the incremental revenue – 100 percent of property taxes and 50 percent of sales and utility taxes – is used to retire the TIF obligation.

Despite the negative view some have of the use of TIF assistance, Vogel said city officials and consultants have worked successfully to make the TIF district less detrimental to local taxing entities, particularly the Lindbergh School District.

Other accomplishments Vogel has attained during his tenure as mayor include adhering to the city’s land-use plan on zoning issues and four successful annexations.

“It always seems to have been the issue here in Sunset Hills – to retain your zoning,” Vogel said. “That’s been very important to the people all along.”

The key, Vogel said, has been following the land-use plan that was developed in the early 1980s. “We’ve followed that almost entirely to the letter, with very minor exceptions  as long as you follow through with that, you’re OK,” he explained.

And strictly adhering to that plan has sometimes meant rejecting development proposals that were not in the best interest of residents, Vogel said.

Doing what’s best for the residents has been a major factor in the city’s four successful annexations, including one simplified annexation in which “100 percent of the people signed up. You only need 75 (percent),” he said.

Given the city’s current population of 8,000, Vogel said he has no plans for any future annexations.

“When I say I don’t have any plans for annexation, it doesn’t mean it’s never going to happen because the board has the power to do things and it may happen they might rule otherwise,” he said.

While the city would consider requests for simplified annexations, “we’re not actually going out and looking for anybody,” the mayor added.

Vogel also is pleased with the financial condition of the city. In 1992 when he first became mayor, the city had $300,000 in reserves. Today, that figure is more than $3 million – and that’s after the city lowered its property tax rate by 8 cents per $100 of assessed valuation.

“The city is running along well. I’m very well satisfied with what conditions we have,” Vogel said.