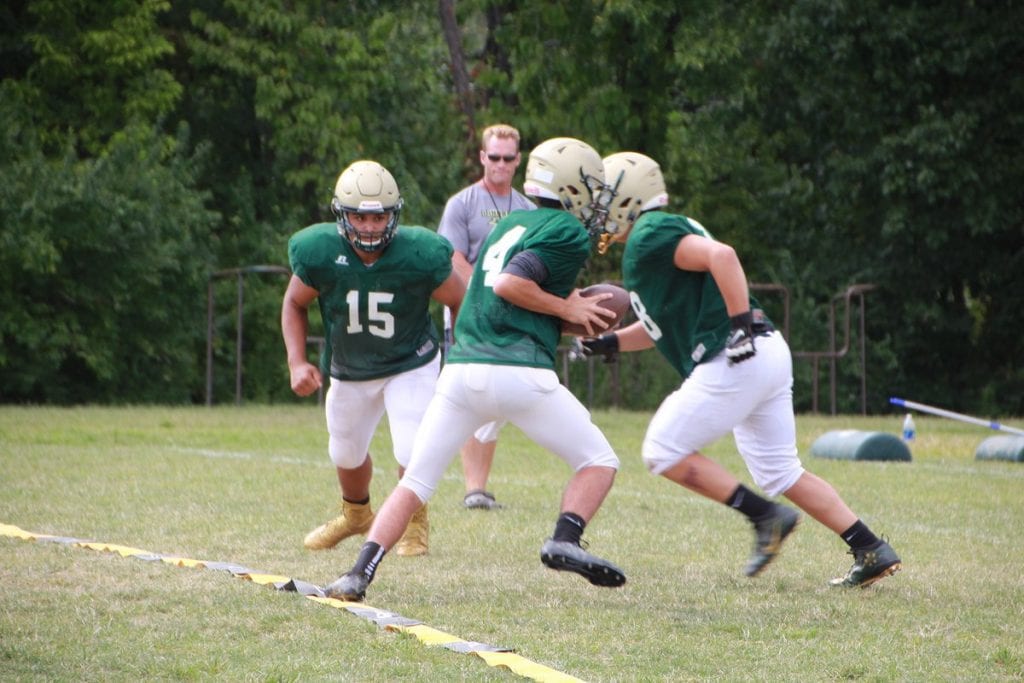 The Lindbergh Football Flyers scrimmage in advance of their win in September 2017.

Another offensive onslaught by the Lindbergh High School varsity football team propelled the Flyers to their sixth straight win Friday night, knocking off fierce rival Mehlville 59-28.
The 6-0 Flyers will host the similarly undefeated Ritenour at 7 p.m. Friday at Lindbergh High School, 5000 S. Lindbergh Blvd.
The 1-5 Panthers lost Thursday night to the 2-4 Marquette Mustangs.
The undefeated Flyers set the tone for last week’s game in the first quarter, scoring 28 points and never looking back.
David Grenia, one of Lindbergh’s top offensive catalysts, scored three touchdowns on the night, all in the first quarter.
Rico Payton also scored in the first quarter, one of his two touchdowns for the night. Quarterback Parker Powell completed 7 of 11 passes for 235 yards and four touchdowns.
In the second quarter, the rest of the Flyers wanted to get in on the scoring.
Sam Huff, Bobby Tessler and William Williams all scored touchdowns, while Garret Butz kicked a 42-yard field goal.
In total, the Flyers added 24 more points to the scoreboard in the second quarter, sending the teams to the locker room at halftime 52-7, as Jackson Dearing scored for the Panthers late in the second.
Flyers head coach Nathan Norman told the Call he was impressed with his players’ focus in the contest.
“I was pleased with the way the team handled themselves in practice this week and the way they approached pregame preparation,” he said. “I felt like this was their most focused approach to a game and it definitely showed in the first two quarters.”
Obviously stunned by the first half, the Panthers tried not to let that affect their efforts in the second. Mehlville’s Jared Smith scored late in the third quarter — the only score for the quarter.
In the fourth quarter, Mehlville’s Jai’ryn Pruitt scored on a 75-yard run, followed by a 49-yard touchdown run by Tedrae Wedderburn. Lindbergh’s Payton then added his second touchdown of the evening.
Mehlville head coach Kent Heinemann told the Call that Lindbergh was a very tough opponent.
“Lindbergh is a very good football team,” he said. “They are very physical up front and do not make very many mistakes.”