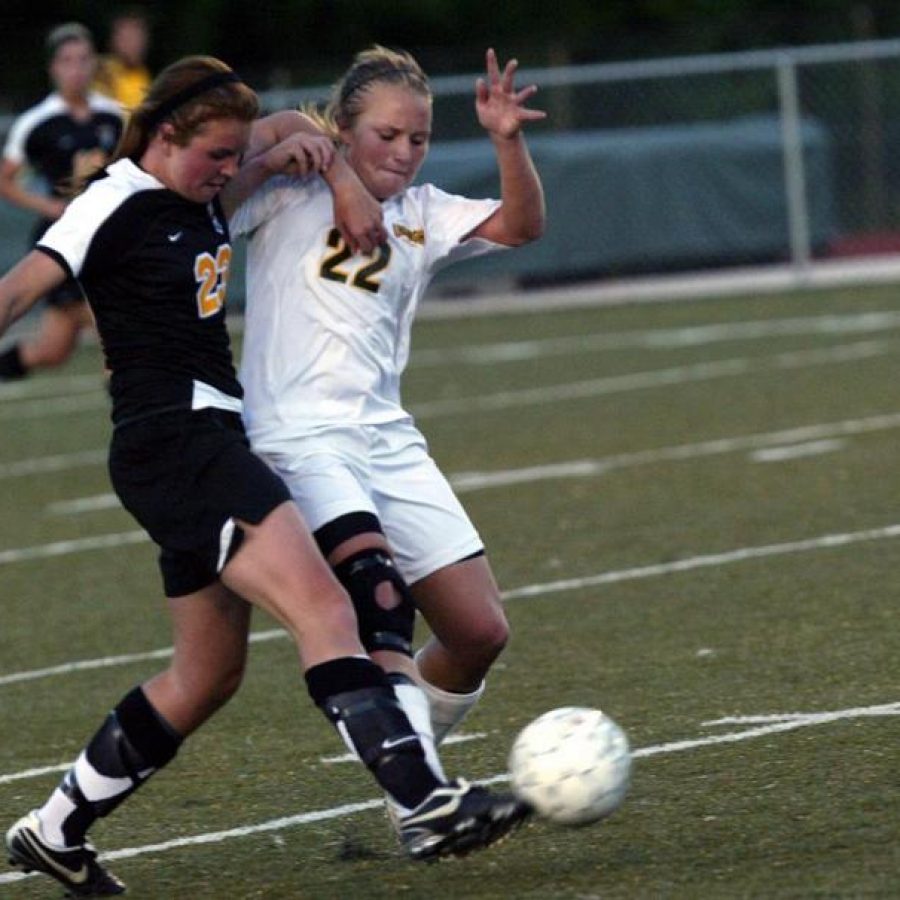 Oakville forward Chloe Hutchinson, left, and Flyers midfielder Jen Kienstra compete for the ball during opening minutes of the second half of Class 3, District 2 play last week. Hutchinson won this battle, but Lindbergh advanced 2-1 to meet Cor Jesu Academy in the district final.

Most soccer fans would agree that penalty kicks can be the cruelest way to lose a game.

“It’s an unfortunate nature of the beast at this time of the year,” said Mark Giesing, Lindbergh head coach. “But you’ve got to give credit for Cor Jesu for what they were able to accomplish.”

The Flyers (13-8, 6-2 Suburban West) took a 1-0 lead midway through the first quarter on a corner-kick goal by Desiree Cain.

Lindbergh’s Jen Kienstra served the ball from the corner as Cain crashed the goal and headed the ball into the upper corner of the net. The goal was Cain’s fourth of the season.

“We had worked every day this week on set pieces and continued to get better each day,” Giesing said. “Desiree crashed the box and was able to make contact with the ball and put it in the upper corner.”

But Cor Jesu’s equalizer goal came from Madeline Galen with Sabrina Holster recording the assist to tie the game 1-1.

Once in penalty kicks, the Flyers missed two of the team’s five kicks, which sealed their fate as Cor Jesu went flawless against Lindbergh.

Despite the loss, Giesing believes that Cain and Kienstra, along with senior teammates Jill Baker, Emily Bozdeck, Brittany Casey, Taylor Hawkins, Taylor Hutson, Amy Massa and Natalie Ounanion, provided a good solid foundation of success on which next year’s squad can build.

“I think that we accomplished a lot this year, but we’re clearly not satisfied,” he said. “We fielded a very inexperienced team at times and on Friday night we played a total of seven freshmen throughout the course of the game. So I feel really good about the future.”