Flooded homes could get FEMA buyouts 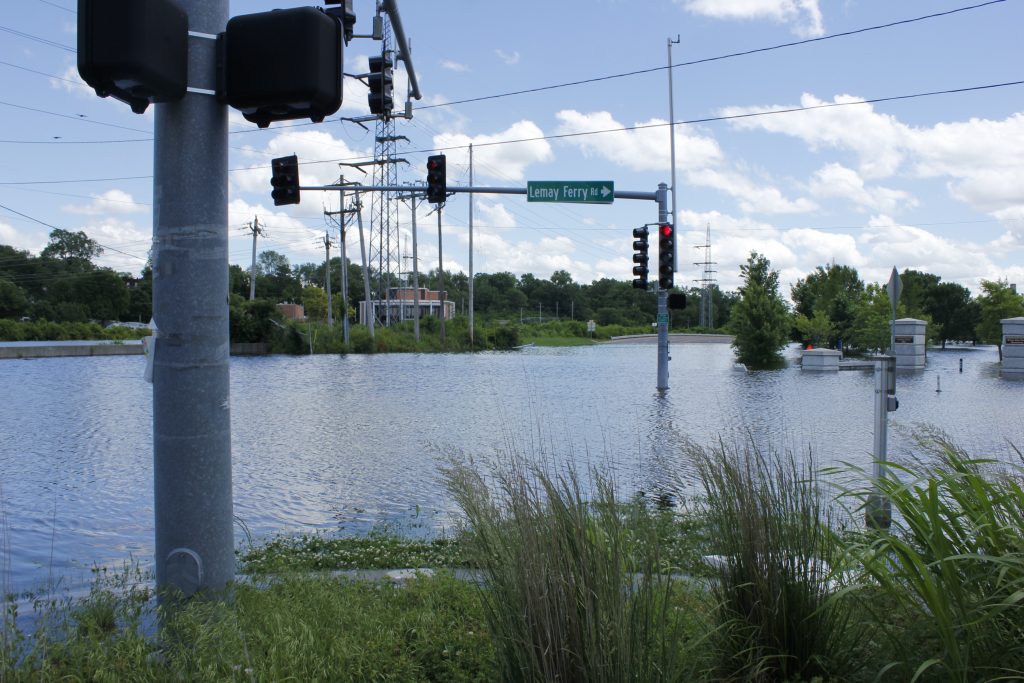 River City Boulevard, at the intersection of Lemay Ferry Road, is inaccessible due to rising floodwater from the River des Peres Thursday, May 30. The Mississippi River, which backs up into the River des Peres, is expected to crest Saturday. Photo by Erin Achenbach.

St. Louis County filed in September seeking potential buyouts for 17 homes in the Lemay area that were affected by flooding from the Mississippi River this past spring. Subsequent FEMA inspections found significant damage to the houses along Fannie Avenue, including mold and other issues caused by flood waters.

The homes qualify for a FEMA program where any county in Missouri can send a notice of interest to the state for a cost-share program, where home buyouts would be split between FEMA funds and county funds, said County Council Presiding Officer Ernie Trakas, who represents the 6th District that includes Lemay.

The state submits all notices from various counties to FEMA, which then has up to two years to decide if the submitting counties qualify for the cost-share program, said Mark Diedrich, director of the St. Louis County Office of Emergency Management. The notice states that the county is willing to fund 25 percent of any potential buyouts.

“You have to understand, this is not a blanket type of thing. The initial phase has taken place, the application is being processed by FEMA and we’re told that could take between a year and years for FEMA to decide that ‘Yes, we’ll go ahead and approve the request and make the funds available,’” Trakas said. “The county would supplement to make reasonable offers with respect to the homes.”

FEMA conducted damage assessments by flyover drone and by car. At that time, FEMA had rejected the state’s initial application for individual and public flood assistance in St. Louis County, but the state planned to appeal FEMA’s decision.

In an Oct. 3 news release from FEMA, 82 counties and the city of St. Louis had been approved for public assistance, as well as 26 counties for individual assistance.

St. Louis County was not approved for either, but the agency stated that all counties in the state qualify for the cost-share program that the county is seeking.

Trakas said that if the county is approved for the cost-share program for buyouts, the goal is to pay market value on each of the 17 homes affected.

“It’s going to have to be market value on each home, and that’s the goal — FEMA supplies ‘X’ amount and the county would supply the rest,” said Trakas. “Between the two, there’s more than enough money to make market value offers.”

As for what would happen if the homes are bought out, Trakas believes that if the properties are all bought out together they would be added to the county park system, since many of the homes are in proximity to an existing park.

Lemay Park was originally a residential neighborhood before the buildings were purchased and removed following extensive damage from the flood in 1993. The county then developed the remaining land, which is located in the River des Peres floodplain, as Lemay Park.

“In the case of future flooding, there’s no individuals harmed by it,” Trakas said.

At a joint meeting of the Concord Democrats and the Progressive Democrats of Lemay Nov. 7, Rep. Bob Burns, D-Affton, who represents Lemay and is challenging Trakas for the 6th District council seat next year, said he is also helping the flood victims.

“There’s one block of Fannie Avenue, I would say $300,000 to $400,000 could buy out the whole block and we’d never have that problem again. It’s right outside of Lemay Park,” said Burns, who noted that he worked with former U.S. Rep Dick Gephardt, D-Missouri, with the buyouts of homes at what is now Lemay Park. “They left that last road (Fannie Avenue), one side of it, and the people have inevitably always fought flood waters… Buy those homes out. That’s the last street that needs to be bought out.”

Currently there is no timeline on if and when the county’s request to FEMA will be accepted but “at least we’re in the game. We didn’t want to pass on the opportunity,” said Trakas.