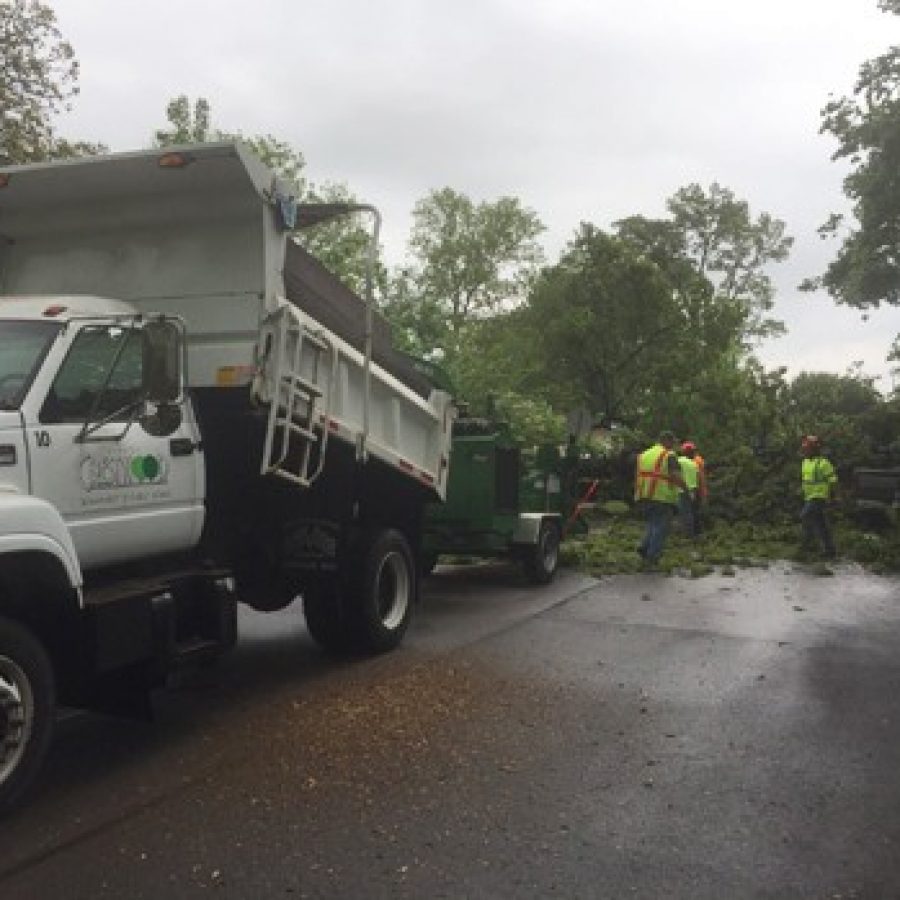 A Crestwood Public Works crew clears a downed tree in this photo taken by Board of Aldermen President Justin Charboneau of Ward 2.

County officials are closing roads across south county after this weekend’s heavy rains and possible near-record flooding expected this week, with several closures of major roads expected to impact commutes through Wednesday.

The Fox and Rockwood school districts canceled school for Tuesday, May 2, due to the flooding.

The St. Louis County Emergency Operations Center in Ballwin issued a flood warning through Sunday, May 7 for the Meramec River at Valley Park and Arnold and the Mississippi River in St. Louis city bordering Lemay.

The Meramec is set to reach its crest in both locations Wednesday. The river is forecast to crest near 39.4 feet at Valley Park by Wednesday morning and 44.5 feet at Arnold Wednesday night, then fall below flood stage early afternoon Saturday. The Mississippi is forecast to crest near 40.1 feet by Wednesday morning. The Meramec set a record when it crested at 44 feet in the flooding of December 2015.

The Missouri Department of Transportation, or MoDOT, closed Interstate 44 and Highway 141 at Fenton Sunday, and I-44 at Valley Park closed at 7 p.m. Monday, with the Bowles Fenton exit past Interstate 270 only open to local traffic. Interstate 44 is closed between Rolla and Lebanon, and cross-state travelers are encouraged to take Interstate 70 instead of I-44.

Missouri American Water is asking residents in south county to conserve water ahead of the flooding. The Metropolitan St. Louis Sewer District is sandbagging around its Fenton Wastewater Treatment Plant to prevent a repeat of the shutdown and sewage spills that happened for weeks after the December 2015 flooding. Laclede Gas asks anyone who smells gas to call (314) 342-0800 to report it from a safe location.

The roads are expected to stay closed through the middle of the week.

To see all the roads closed in south county, see the “Road Closures” section below.

MoDOT is encouraging travelers to “turn around, don’t drown,” and never to cross a flooded road even if it doesn’t have a closure sign.

Revere Lane off South Lindbergh Boulevard in Green Park is closed due to flooding.

Smizer Station at the Avalon Hills subdivision in Fenton is closed.

Grant Road between Gravois and Pardee is flooded.

Lemay Ferry Road has been closed since early Saturday due to flooding at River City Casino Boulevard in Lemay.

In Oakville, New Baumgartner from Weber Quarry to Railroad Bridge #506.

Old Telegraph Road is closed from Telegraph to EOM.

Sunset Hills is providing sandbags to residents in flood-prone areas that can be picked up at:

The city is asking for volunteers to fill sandbags at 12:30 p.m. Sunday at Shelter C in Watson Trail Park. Volunteers should bring a shovel.

The county EOC has 140,000 tons of sand and 15,000 sandbags on hand for the flood. County residents can pick up sand and bags can be picked up at 12 p.m. Sunday at the county Department of Transportation District 3 center at 16099 Ruck Road, Wildwood. The bags are self-filling, and those who want them must bring a shovel.

County Executive Steve Stenger said in a news release that the EOC is closely monitoring the heavy rains.

“Our emergency management apparatus is in place and we are monitoring the river levels very closely,” Stenger said. “With the immediate concern being flash flooding, our swift water rescue teams are ready to be deployed immediately. We have also communicated with Eureka, Fenton and Valley Park, along with other affected communities, to offer our assistance as needed.”

Statewide, Gov. Eric Greitens, in anticipation of severe, dangerous rainstorms and flash flooding throughout the state of Missouri, signed an executive order yesterday declaring a State of Emergency.

Professionals from the State Emergency Management Agency, the Missouri State Highway Patrol, the Missouri National Guard and Missouri’s Task Force 1 Rescue Unit have deployed resources on land, on water, and in the sky throughout Missouri to save lives and to protect property.

So far, there have been 93 evacuations and 33 rescues. All specialized rescue teams and swift water teams have been deployed, which include assets from the Missouri State Highway Patrol, Missouri Task Force 1, the Missouri Department of Conservation and Fire Mutual Aid Resources.

Greitens released the following statement: “Thank you to our first responders for their courageous and capable work to keep Missouri families safe and to protect property. Together, we took early action to prepare for this storm, and our pre-staged rescue teams are now executing operations across Missouri. Please stay safe and stay away from rising water.”

The following will happen as the Meramec reaches various flood stages:

*Arnold, 38.9 feet: Water will begin to cross Old Gravois in Sunset Hills, according to GIS information from the city.

* Valley Park, 38.8 feet: Interstate 44 is closed. During the December 2015 flood, it was closed from Bowles Avenue in Valley Park west to the Missouri Route 109 exit in Eureka.

*Arnold, 34.2 feet: Water will back to the hump bridge on West Watson in Sunset Hills.

*Arnold, 32.9 feet: West Watson in Sunset Hills will be flooded by the driving range.

* Valley Park, 29 feet: The intersection of 141 and North Highway drive at I-44 is closed above this level. In Fenton, the following roads are closed at this level: all of Yarnell Road, Riverside Drive at Wolfner Drive, Fabricator Drive at Headland Drive, Soccer Park Road at the truck stop, Rudder Road at Fabick Drive, and Larkin Williams Road at Ferry Street.

*Arnold, 26 feet: House at the end of Kasebaum Lane is surrounded by water just west of Lemay Ferry Road bridge. Hawkins Road south of Meramec Bottom Road is closed near this height.

* Valley Park, 23.5 feet: The riverfront parking area of Minnie Ha Ha Park in Sunset Hills across the river from Fenton begins flooding near this height.

* Valley Park, 21 feet: Water enters the southwest corner of the Larkin Williams and Yarnell Road intersection in Fenton through a stormwater grate.

+This impact level may vary depending on the crest difference of the Mississippi River at St. Louis from 30.8 feet, the March 2008 crest.

The effect from Mississippi River flooding at various stages near St. Louis city will be:

*38 feet: The U.S. Coast Guard will consider closing the St. Louis harbor to navigation above this level.