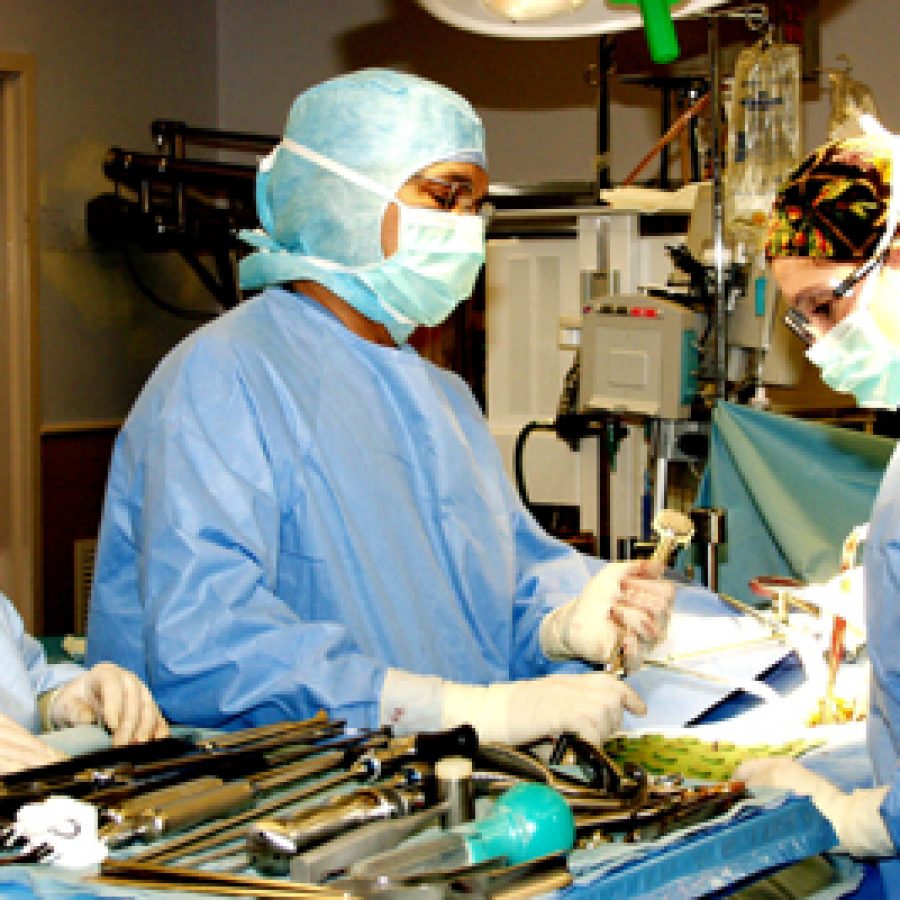 Shitut removed the 49-year-old female patient’s damaged disc and replaced it with an artificial one.

The Charité Artificial Disc from DePuy Spine was created as an alternative to spinal fusion surgery to treat degenerative disc disease. It was approved by the U.S. Food and Drug Administration for use in the United States on Oct. 26.

“It is a real breakthrough for patients who have low back pain due to disc degeneration in one of the two lowest levels of the spine (L4-L5 or L5-S1),” Shitut stated in a news release.

“Before this, the only other surgical option was spinal fusion surgery, which immobilizes the vertebrae surrounding the disc and permanently limits motion. Spinal fusion also may increase stress on — and accelerate degeneration of — the adjoining discs. The artificial disc allows the spine to move and doesn’t put stress on the other discs,” the doctor added.

It was designed to restore disc space height and motion flexibility, to prevent further disc degeneration, to reduce or eliminate pain from motion or nerve compression and to improve the patient’s functional activities. It has a projected life span of 40 years.

“Another advantage with the disc re-placement surgery is that no bone graft is required,” Dr. Shitut noted. “With spinal fusion surgery, the surgeon removes the disc and packs the bone graft into the space between and behind the vertebrae. This bone graft generally is taken from the pa-tient’s hip, thereby requiring two separate incisions and pain in both the hip and the back during recovery from surgery.”

In disc replacement surgery, the spine is accessed through an incision in the ab-domen, just below the navel.

In the first surgery on Dec. 15, Dr. Ken-neth Smith, a staff surgeon, assisted Shitut in clearing the way to the patient’s spine.

Shitut then removed the degenerated disc as completely as possible, and inserted the prosthesis tightly between the vertebrae so it won’t move.

The surgery takes about two to three hours, requiring a hospital stay of three to four days. The patient can resume normal activities within four to six weeks — four to six months for activities requiring heavy lifting. Recovery time is significantly shorter than with fusion surgery, which can take up to a year for the bone graft to be-come solid, according to Shitut.

Disc replacement is not intended to re-place spinal fusion surgery, according to the news release.

It is not indicated for patients who have disc deterioration or instability at more than one spinal level; have poor bone quality or significant deformity; or have an in-fection, tumors or cancer in the spinal area.

People older than 60 currently are not considered candidates because of probable bone deterioration due to aging.

Shitut decided to become a pioneer in disc replacement surgery because “this is something that has been on the horizon of spinal surgery for the past several years,” he stated. “In the future, full disc replacement is going to be the premier method of taking care of people with degenerative disc disease.”