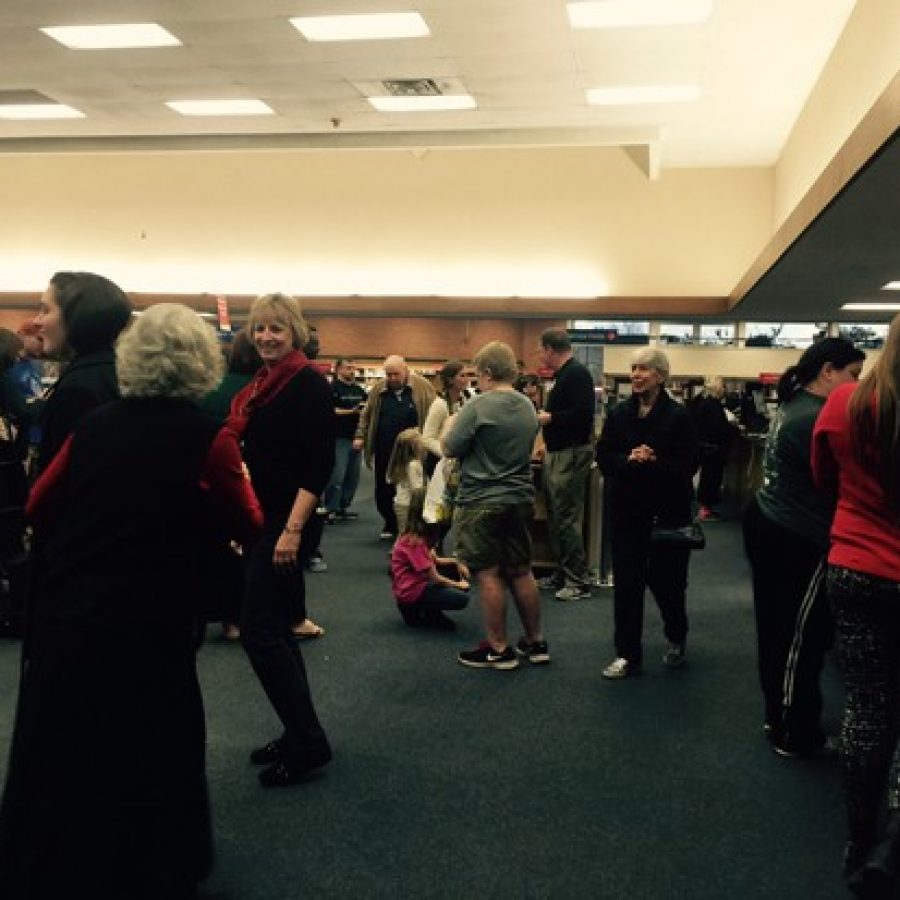 As the clock struck 5 p.m. in Tesson Ferry's last minute of existence as a library, patrons still gathered around to check out books.

The Tesson Ferry Branch County Library closed last week exactly how it had existed since it opened in 1958 — filled with children and busy to the end.

In some ways the library’s last minutes as a library were indistinguishable from any other Saturday: More than 50 cars still filled the parking lot for the library’s last half hour. Some of the last patrons of the library — which was one of the busiest in the St. Louis County Library system — left with tears in their eyes, some smiled as they recalled childhood memories at the library and some shook their heads at the way library officials had made the decision to move it.

And of course, most had their arms piled high with the last books to leave the beloved library’s doors.

Asked if they had any childhood memories of the library, its last patrons said they had been coming to the library since they were 11 years old, or 6, or since they got married more than 30 years ago.

One older woman said she always thought of her mother when she went to the library because when she was growing up, they went every weekend.

Although most of the library’s last patrons said they will miss the Tesson Ferry Branch and its central location in Green Park, many also look forward to the opening of its replacement, the Grant’s View Branch Library. The new library branch will have an expanded children’s space, computers and other offerings.

Grant’s View is slated to open at the intersection of Gravois and Musick in mid-December.

But there is one major problem with Grant’s View, Fran Cooke pointed out as she left Tesson Ferry one last time.

When the library’s official closing time of 5 p.m. came around, dozens of people still crowded around the library clerks, not wanting to leave.

It was longtime library assistant Patty Walker-Welk, who has worked at the branch 23 years and checked out books there as a child before that, who made the official announcement that finally prompted the crowd to head toward the exits, books and celebratory cake in hand.

“The Tesson Ferry Branch is now permanently closed,” Walker-Welk called out, hands above her head.

The changes at the library through the years were symbolized by the final item checked out from Tesson Ferry, which was not a book.

Carole Young, a clerk at the library, said she didn’t plan it ahead of time, but checked out the very last item: a DVD of the British television series “The Escape Artist.”

Among the children leaving with their last books from Tesson Ferry was Molly Davis, 7, who has been coming to the library for the four years since her family moved back to the United States from Germany.

Molly’s favorite memory was the time she and her parents all checked out books for her during a visit without knowing the others had, too, and she ended up with 47 books to read on vacation.

“I read all of them,” she noted proudly.

A group of current and former Tesson Ferry employees were the last to leave the building, but on a day full of reminiscing about their favorite library, one memory stood out.

Angie Villani Kriegshauser said she met her husband, Ken, when they started work at Tesson Ferry the same day — Aug. 27, 1997 — as shelvers.

“He started an hour before me,” she recalled. “The entire branch was practically invited to our wedding.

“It’s very nostalgic — to see it close is a sad thing.”