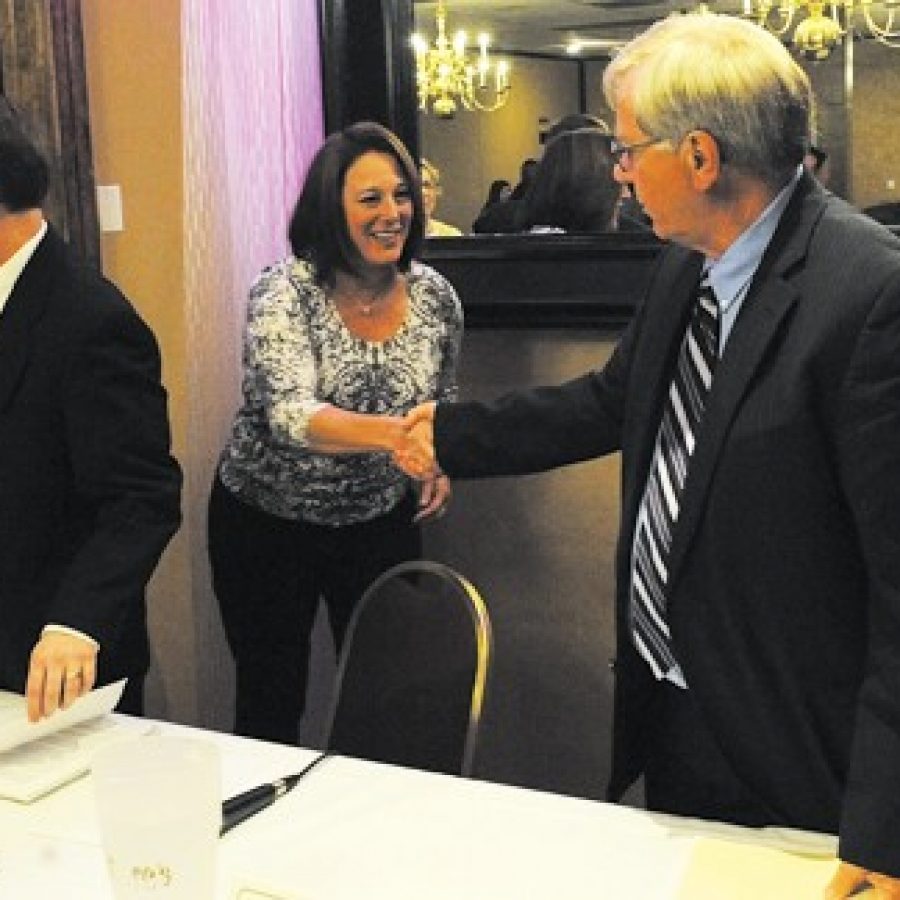 Mehlville Board of Education member Lori Trakas shakes hands with board member Larry Felton, right, last week at the conclusion of a candidate forum sponsored by Call Newspapers. Trakas, Felton and Kevin Schartner, left, are vying for two school board seats in the April 5 election. Bea Corbin photo

The three candidates running for two seats on the Mehlville Board of Education shared their diverse views on everything from how the district is funded to whether they support a new school of innovation last week at a candidate forum sponsored by the Call.

Incumbents Larry Felton and Lori Trakas are running for re-election for their seats, which carry three-year terms, and Oakville resident Kevin Schartner is seeking his first term on the board. Felton is the longest-serving member of the board, first elected in 2007, and Trakas was first elected in 2013.

The divisions between the candidates were clear from the opening statements at the Call’s March 23 forum at Andre’s South, moderated by Mehlville Fire Protection District Board of Directors Chairman Aaron Hilmer, with Felton and Trakas emphasizing their experience on the board, but for different reasons.

For Felton, the biggest changes in the district have come in the past two years.

“We have a feeling of cooperation between the community and the school district that I’ve never seen before in the 24 years I’ve been here,” he said. “This didn’t happen by accident — this happened because board members made decisions two, 2.5 years ago that put this in motion. We hired (interim Superintendent) Dr. Norm Ridder — he made it cool to be a planner. He freed those of us that are hopelessly horizontal in our thinking.”

In contrast to Felton’s support of the direction the district is headed, Trakas embraced her frequent role as the contrarian of the board, who “asks the questions that Mehlville needs to be asked” and has “filled up with information over the past three years.” In the last year, Trakas has compared the district’s spending to that of Greece and opposed Proposition R and Proposition A.

She first voted for the strategic plan, but then later spoke against it.

“Recently it was said to me that it only takes one match to light up a dark room,” Trakas said. “For outsiders in the education world, it can feel like you are in a dark room. However, one only needs the perseverance to begin creating a spark in oneself that eventually reaches a glimmer of light into our educational system.”

Schartner is new to the school board, but not to strategic planning, since he works as a program manager for continuous improvement at Ameren.

“I’ve been in charge of multimillion-dollar budgets for most of my career,” Schartner said. “I am a fiscal conservative — every Saturday is ‘Balance the Checkbook Day’ … With other people’s money, I’m even more focused.”

As treasurer of the pro-Prop R campaign committee, the Mehlville-Oakville United Committee, Schartner oversaw more than $50,000 in donations last year but, when the campaign met all its funding goals, he put out a call on Facebook to let people know not to donate anymore.

“I knew it was other people’s money — and I knew if I were going to contribute money for a purpose and it wasn’t going to go there, I would want to know,” Schartner said. “That’s how I roll.”

Later in the forum, Schartner noted that he is “not a fan of tax increases, despite what some people might think of getting involved with MOU.”

In response to a reader-submitted question on whether the candidates support the project-based school of innovation proposed by Superintendent Chris Gaines that could open next year, Felton and Schartner said they back the new school, which would open in existing facilities, as a positive step to make Mehlville a destination district.

“With problem-based learning, everybody has a stake in it, and it’s a collaborative environment,” Felton said.

“A lot of the world is problem-solvers,” Schartner said. “What’s great about this is you’re applying it as you’re learning it … This is going to lift everybody, but it’s not going to displace traditional education.”

In her answer, Trakas redirected the conversation to a film Gaines has screened twice at Mehlville, Most Likely to Succeed, which explores innovative and project-based learning, and its executive producer, venture capitalist Ted Dintersmith.

Although Trakas said she applauds some innovative learning techniques Mehlville already uses, she objects that Dintersmith served as part of a delegation representing the United States in the United Nations General Assembly.

“When you start digging into the school of innovation, you see … the author of it, the movie that’s been playing, he’s got some political ties — and that’s a concern to me,” she said. “School districts are supposed to be local control, local decisions. He has been assigned to the United Nations General Assembly by Barack Obama, which kind of tends to tell you that it’s looking for a global education — which is different than what education should be, a local control.”

Trakas joined the board in a unanimous vote Jan. 28 to give the go-ahead to preliminary planning for the school, with Felton absent. On the Call’s questionnaire, Trakas wrote that she was initially optimistic about the school of innovation, but now has concerns that it could be a back-door attempt to take over Mehlville curriculum.

“I have concerns that the school of innovation may be another federal education program wrapped in a new package, designed to enhance the U.S. Department of Education’s control over decisions that should be made locally,” Trakas said.

With Gaines in the audience, the candidates took different approaches to a question on whether they support Gaines’ “ambitious” plans for the district and whether they have ever disagreed with him.

Felton said Gaines has done what the board hired him to do: Challenge the community and bring Mehlville to the next level.

“If we’re going to be a destination district and move forward, we really have to adjust our thinking,” he said.

“I don’t think that you do great things by having mediocre plans or tentative plans,” Schartner said, noting that at one point he probably will disagree with Gaines. “I’m sure it’s going to happen, and I’m not going to be shy about saying it when that does happen, but you can do that respectfully and you can work toward a better solution.”

“I think he is ambitious, and he has brought a vision that is meaningful to him and is educating the district on what that would look like,” Trakas said. “There are going to be disagreements from time to time, and it is about respectfully disagreeing, and it is about respectfully honoring other people’s opinion. Sometimes on school districts, people really struggle with the differing opinion.”