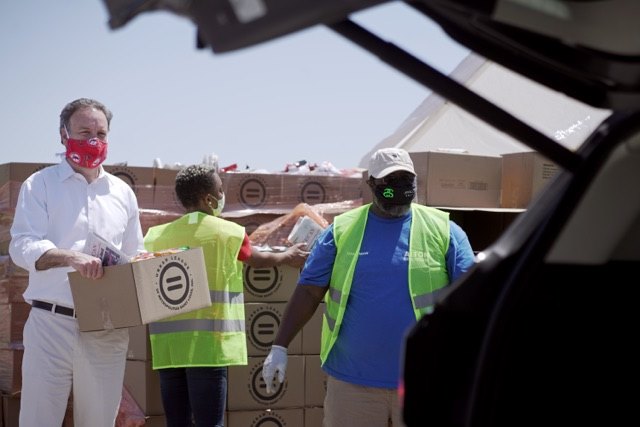 The Urban League of Metropolitan Saint Louis distributed food and other items to 2,500 families Saturday, May 2, at the former Jamestown Mall, assisted by County Executive Sam Page in a mask, left.

A federal judge has denied two business owners’ motion for a restraining order to end the current stay-at-home orders in St. Louis, blocking efforts to reopen “nonessential” businesses shut down in the ongoing coronavirus pandemic.

St. Louis County gym owner Allan Finnegan, who lives in Manchester and operates his Anytime Fitness gym there, and Cherokee Street antique store owner Cherri Elder filed a lawsuit May 4 against the county and city, respectively, seeking to overturn the stay-at-home orders, which they claim are unconstitutionally keeping their businesses closed.

U.S. District Judge Stephen R. Clark, an appointee of President Donald Trump who took office last June, sided with the county and the city in a 22-page ruling Friday denying a temporary restraining order that would have ended the city and county lockdowns.

Since the lawsuit was filed last week, County Executive Sam Page and St. Louis Mayor Lyda Krewson have both said they will start to gradually end their stay-at-home orders May 18, if there is no spike in infections between now and then. The orders have been in effect since March.

With no vaccine for the COVID-19 virus, public-health authorities have tried to limit exposure to stop the spread of the infection and prevent deaths, Clark noted in his ruling.

In denying the restraining order, Clark said that local officials have broad powers during a health pandemic.

“Simply put, at times such as we face today, all rights are subject to some invasion,” Clark said.

The decision to close businesses due to a pandemic should be a decision made by the executive powers in a local area, not the courts, Clark said: “During a public crisis, a court has no authority to determine the most effective measures for protecting the public.”

Currently all businesses in the county and city are shut down that cannot operate from home and are not deemed “essential” businesses like restaurants, grocery stores, pharmacies, veterinarians and pet supply stores and hardware stores. Page has said that many businesses will be allowed to reopen starting May 18, but gyms are considered areas of “high transmission” and will not be allowed to reopen even then.

Through their attorney Bevis Schock, Finnegan and Elder alleged in the lawsuit that the orders are unconstitutional and invalid under Missouri law, since Gov. Mike Parson ended his statewide stay-at-home order May 4. They maintain that state statutes only allow the state health director to close businesses for public health, and that another state statute says that local directives have to be “not inconsistent” with state orders.

Clark said in his ruling that although the businesses “understandably seek to reopen,” he does not believe the shelter-in-place directives issued by Page and Krewson violate the U.S. Constitution.

“Regardless of whether the orders violate state law, the Court finds that they do not violate the Constitution because they have a real and substantial relation to the goal of stemming the tide of the public-health pandemic, and they are not ‘beyond all question, a plain, palpable invasion of rights secured by the fundamental law,’” Clark wrote in his order, quoting from the court decision “Jacobson v. Massachusetts” of 1905, in which a man challenged the legality of his city, Cambridge, Massachusetts, to force him to get a smallpox vaccine.

That 1905 U.S. Supreme Court verdict established a precedent that during a public-health crisis, “a community has the right to protect itself against an epidemic of disease which threatens the safety of its members,” and states may implement measures that infringe on constitutional rights, with certain limits.

The precedent set by that case has been reinforced by two federal lawsuits since the start of the COVID-19 pandemic, Clark noted. In one case, the Eighth Circuit Court of Appeals upheld an emergency order issued by the state of Arkansas that all non-medically necessary surgeries, including surgical abortions, would be postponed until May 11. In siding with Arkansas in that case, the appellate court emphasized the limited role of the courts during a pandemic. The Fifth Circuit Court of Appeals upheld similar reasoning in a lawsuit against Texas that was also decided in April.

Clark noted that orders issued by local authorities that would otherwise be seen as unconstitutional can be tolerated if they are for public health and are clearly temporary, and he said the city and county orders do not appear to be permanent. The fact that Page and Krewson have revised their orders several times based on data shows that their intent is that the orders will not continue forever, but will change based on recommendations of health officials, the judge said.

“The City’s and County’s respective self-interest in generating tax revenue from businesses provides further assurance” that the orders are intended to be temporary, Clark noted.

Schock made the case for the city and county business owners that the stay-at-home orders violate their rights to assembly and association under the First Amendment and the due process clause of the 14th Amendment. They lose the right to assemble because they cannot assemble with their staff and customers in their businesses; they lose the right to association because they cannot discuss fitness or antiques with their customers; and they lose their right to due process because the orders violate Missouri law and their right to choose their occupations and earn a living from their assets.

Elder and Finnegan both said that they are “financially strapped” because of the forced closure of their businesses. Elder said in an affidavit that she wants to open and “wants to gather with her staff and customers to discuss antiques and their artistic merit,” Clark said in his ruling, noting that Elder has been able to communicate with her customers using the internet.

Four attorneys from outside law firm Lewis Rice made arguments for the county: Neal Perryman, Steven Capizzi, Jerina Dominique Phillips and Michael Jente. The city of St. Louis is represented by the city counselor’s office in the case.

In a filing for a motion to dismiss, the county’s attorneys said that there is no conflict between the stay-at-home orders and state law and that, referring to Finnegan’s company SH3 Health Consulting, “there is no predicate for SH3’s theory of relief of a federal constitutional deprivation.”

To determine whether to issue a temporary restraining order, Clark said he had to balance four factors: the threat of irreparable harm to the plaintiff; the potential harm to the other party; the likelihood of success on the merits; and the public interest.

“The Court does not doubt the earnestness of Plaintiffs’ desire to open their businesses, generate revenue, earn a living, and employ — and as importantly, pay — others. The Court further recognizes the economic and emotional hardships these orders can impose on people and businesses,” Clark said in his ruling. “The Court is not unsympathetic to Plaintiffs’ plight, but… in our constitutional republic, the decisions of whether, when, and how to exercise emergency powers amidst a global pandemic belong not to the unelected members of the judicial branch but to the elected officials of the executive branch.”

Quoting “The Federalist Papers,” Clark continued, “Separation of powers requires that the three branches of government ‘stay in their lane.’… Judicial review does not give the courts license to substitute their judgment for the decisions made by the coordinate branches of government. When courts substitute their judgment for judgements made by the executive or legislative branches, courts exceed their authority, veritably swerving into the lanes of the other branches, and violating the Constitutional separation of powers.”

If the citizens disagree with the decisions of Page or Krewson, they can be held accountable at the ballot box, Clark noted. But federal judges have lifetime appointments and can never be voted out of office, so their decisions should be limited in scope, “declaring what the law is, not what the law should be.”

Clark: Orders are not unconstitutional

Finnegan and Elder raise constitutional questions about the stay-at-home order, which made the case a federal one. But Clark didn’t side with those arguments.

Regarding possible violations of freedom of association because Elder and Finnegan are prohibited from gathering in person with their customers, Clark said since they are still able to videoconference with customers, he does not see a fundamental violation of First Amendment rights.

The business owners also raised questions about whether local authorities can declare an emergency and issue stay-at-home orders under state law.

But Clark said that question could be out of the jurisdiction of a federal court. A federal court analyzing various aspects of how cities and counties relate to state law had the “potential for upsetting the delicate balance between federal and state courts,” the judge said.

But Clark issued his ruling without considering the state aspect of the claims: “Because the Court finds Plaintiffs are unlikely to succeed on the federal issues, it does not need to reach the state law issues.”

Read the judge’s ruling below: