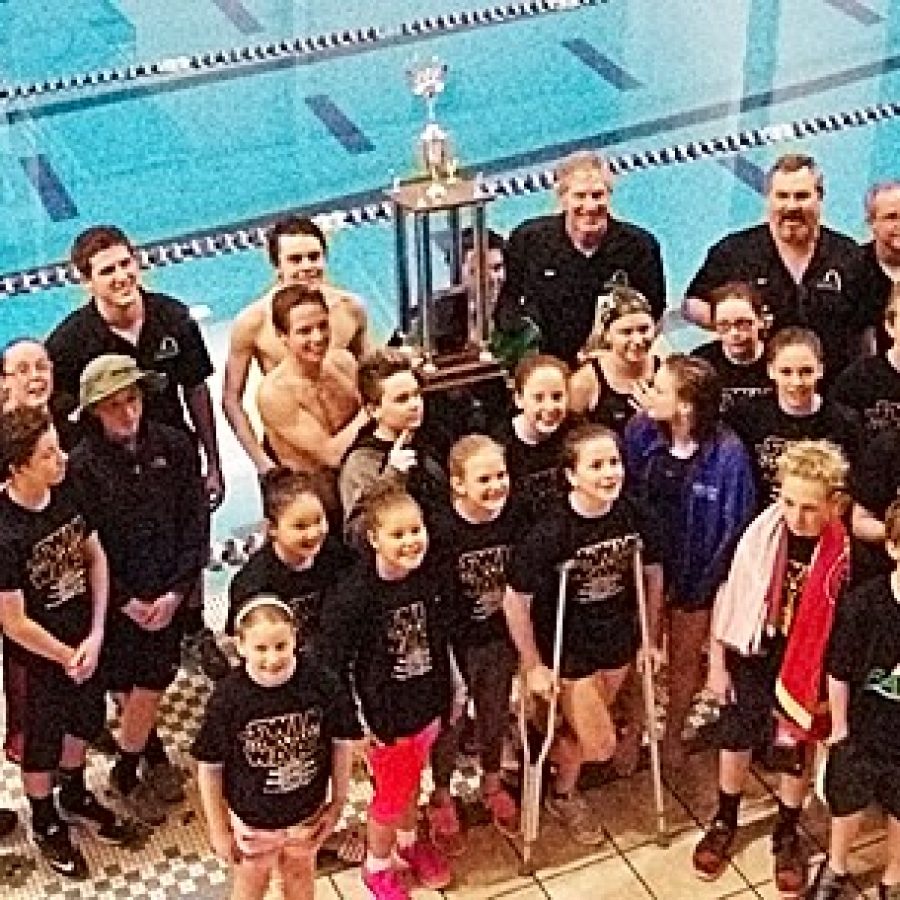 Members of Flyers Aquatic Swim Team are pictured with their trophy for winning the Ozark Swimming Division 1 Swim Meet championship for the second consecutive year.

This year’s competition was comprised of 21 swim teams from Illinois and Missouri. Competing over the course of the three-day meet at the St. Peter’s Rec-Plex were 621 swimmers ranging in age from 8 to 14.

To attend the Division 1 meet, swimmers had to qualify with a specific time for each event. FAST sent 104 swimmers to compete.

FAST started the third and final day of the meet with a small lead, but pulled ahead by winning seven of 10 freestyle relays, which was more than all of the other teams combined.

FAST’s Head Coach Jim Halliburton stated in a news release, “(The) Ozark Division I Championship win was a total team effort. It took a lot of swimmers, who swam very hard, swam a lot of races and relays and swam very fast and placed very well.

“It also took a lot of good coaching from a lot of great FAST coaches. Winning the Division 1 championship this year makes me so proud to be associated with FAST.”

With the Division 1 win secured, FAST next looks to score big this weekend in Oklahoma.

“FAST will take 23 swimmers to Jenks, Okla., for the Sectional Championship, which features the top swimmers of any age from the states of Kansas, Oklahoma, Nebraska, Arkansas, Missouri and the Southern part of Illinois,” Halliburton stated in the release. “After Sectionals, FAST’s 8-and-under age bracket will compete in their Division Championship meet March 12 and 13 at Pattonville High School.

FAST is a competitive swim team serving the St. Louis area with swimmers ranging in abilities from beginner to Olympic trial qualifiers. For more information, visit