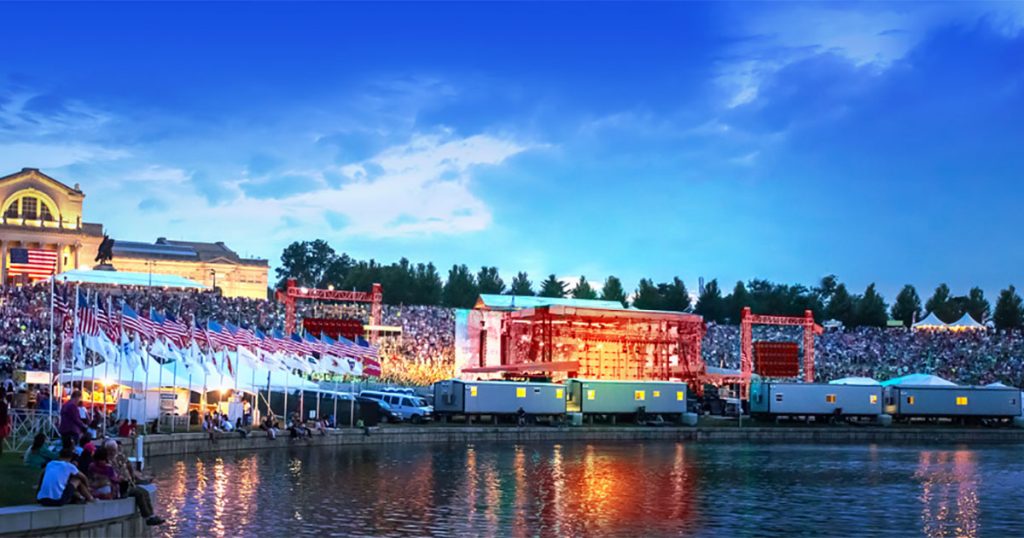 Fair St. Louis announced the entertainment lineup last week for its 2019 annual 4th of July celebration by the Arch.

“For 39 years, Fair St. Louis has been a celebration for St. Louis produced by St. Louisans, and we are so excited to return to Gateway Arch National Park for three days of chart-topping entertainment, family friendly activities, the world-renowned Boeing Air Show, and of course the Edward Jones Fireworks over the Mississippi River,” David Estes, general chairman of Fair Saint Louis 2019, said in a news release. “Fair St. Louis has consistently been named one of the nation’s top Independence Day celebrations, and we invite those of all ages to join us at the Arch for an unforgettable birthday party.”

Popular family friendly Fair St. Louis events and attractions such as the Boeing Air Show, Salute to the Troops presented by Express Scripts, Purina Festival Zone and the Interactive Zone all return for each day of the fair. Fireworks presented by Edward Jones will cap off each night.

America’s Birthday Parade (formerly the VP Parade) will kick off at the intersection of 20th and Market Street in downtown St. Louis Thursday, July 4 at 9:30 a.m. The parade will proceed east on Market Street and end at Market and Broadway. This year’s theme is “We The People!” More information about the parade is available at americasbirthdayparade.com.

2019 Fair St. Louis Schedule of Events
Schedule and times are subject to change. All performances will take place on the Enterprise Rent-A-Car Stage. More information is available at fairsaintlouis.org.

“We couldn’t provide this gift to the St. Louis community without the support of our presenting partner, Enterprise Rent-A-Car, as well as our featured partners Budweiser, Edward Jones, Maritz, Mastercard, Purina, Express Scripts and the Express Scripts Foundation,” said Estes. “Fair Saint Louis is successful year after year thanks to the civic collaboration with the City of St. Louis, including the police and fire departments, the National Park Service and many other great organizations.”

Fairgoers are encouraged to plan ahead. Prepaid parking in designated downtown St. Louis lots is available. Please visit fairsaintlouis.org to find out more and to purchase a pre-paid parking option. A list of downtown parking locations is available at getaroundstl.com. Metro, biking and walking continue to be great options to get to and from the Fair.

This year, Fair St. Louis has collaborated with local clothing retailer Arch Apparel on Fair St. Louis-branded T-shirts and hats. All merchandise is available for purchase at archapparel.com,fairsaintlouis.org or at the Arch Apparel store, located at 2335 S. Hanley Road, St. Louis, MO 63144. Merchandise will also be sold at Arch Apparel’s mobile stores at Fair St. Louis. The stores will be located on Leonor K. Sullivan Blvd. below the Arch Grand Staircase and inside Gate 1.