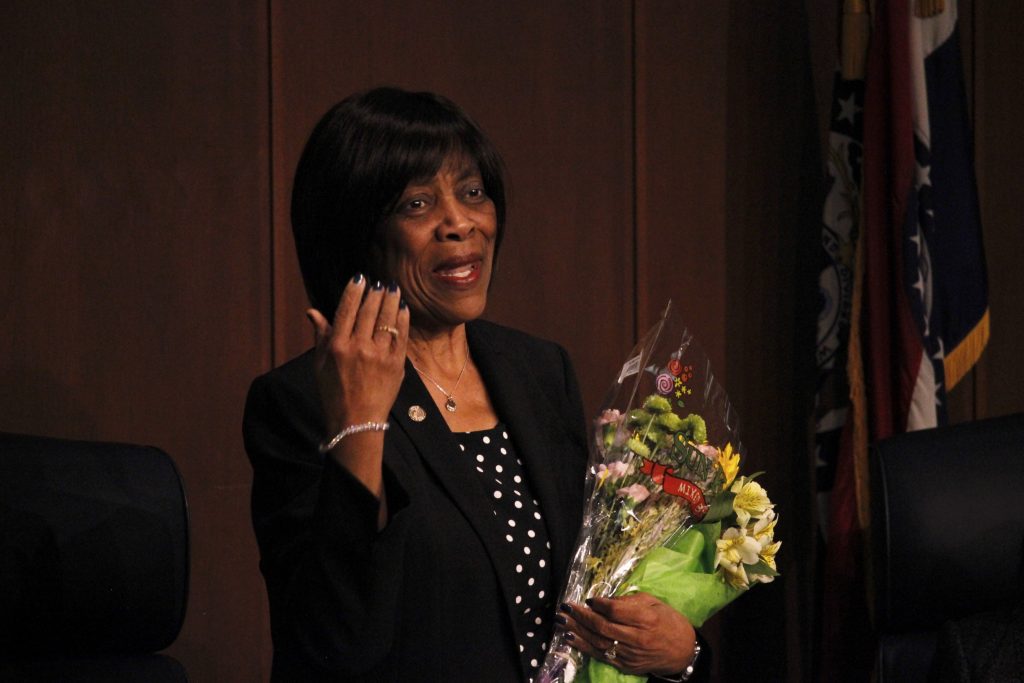 St. Louis County Councilwoman Hazel Erby resigned during her final council meeting last week after a 15-year tenure to take a position working for new County Executive Sam Page, and one member said the legislative body is now without the “conscience of the council.”

Erby, 73, a Democrat from University City, was the longest serving council member and had represented the 1st District since 2004. She postponed taking her new position in Page’s administration as a director of diversity, equity and inclusion by two days so she could have a final council farewell.

It was an emotional night as Erby thanked her constituents, council staff, fellow council members and her family for their support over the past 15 years she served in office.

“I cannot believe that tonight is my last council meeting. It has been a pleasure serving the 1st District of St. Louis County… I am leaving public office, but I am not leaving my community,” said Erby. “I also want to give a special thank you to my colleagues, past and present… I’ve had the pleasure of serving with all of them. Whether we agreed or disagreed, I respect all of them for the time they give to the citizens of St. Louis County.”

Erby’s district includes Ferguson, parts of University City and Hazelwood and several other North County communities. She won the seat in a special election after then-1st District Councilman Charlie Dooley, D-Northwoods, was chosen for county executive after the death of the late County Executive Buzz Westfall in office in October 2003.

Erby was perhaps the only member of the council who regularly visited the sites of zoning projects in other districts, especially in South County.

And she achieved a legislative victory this year with unanimous passage of a minority contracting inclusion bill she had been working on for years. The bill outlines the percentage of contracts that go to minorities and women.

“Hazel Erby epitomizes service and statesmanship. She is the model of how to do it,” said 6th District Councilman Ernie Trakas, R-Oakville, holding back tears. “I cannot sing your praises enough. You’re just the model of how to represent your community with passion… I so hope to emulate your leadership and guidance.”

Page, who Erby was challenging just two weeks before over who would be named county executive following former County Executive Steve Stenger’s federal indictment and resignation, also offered kind words to the councilwoman, albeit in a less traditional way. Page, who was out of town attending a conference in Washington D.C., video-called in over Skype to give his county executive’s report, appearing alongside U.S. Rep. Lacy Clay, D-St. Louis, and U.S. Rep. Ann Wagner, R-Ballwin.

“I want to recognize Councilwoman Erby for her 15 years of service to the county,” said Page. “I’m excited to see what the future holds for the both of us.”

A special election will likely be held in August to fill Page’s and Erby’s seats.

Erby’s resignation makes 7th District Councilman Mark Harder the most senior member of the council. He took office in 2015.

Trakas said Erby’s determination to represent the overall best interests of the county as what he calls the “conscience of the council” spurred him to chair the council’s Ethics Committee investigations into Stenger, among other actions he’s taken.

“She was the model of how to do it right,” Trakas said. “She understood that she represented her district, but she also understood that she had an obligation to a larger body of people. She never had a myopic view of only District 1. It was also what’s best for the people of the county. I try to emulate that with her.”

Erby will work side by side in two separate offices with Jack L. Thomas Jr., whom Stenger named the “first chief diversity officer for St. Louis County government” in June 2018 after a nationwide search. Page will decide later if Erby’s and Thomas’ offices should be merged into one.