Ujka confirms he will apply for Holloway's seat 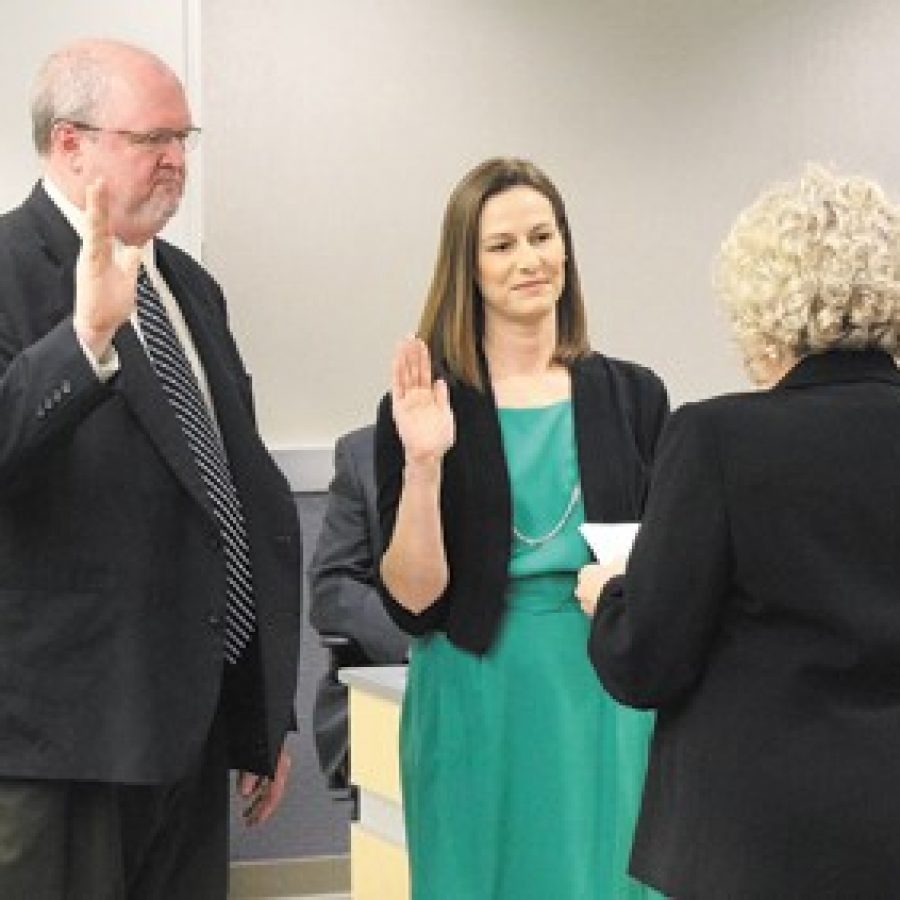 Lindbergh Board of Education President Kathy Kienstra, right, swears in new board members Mike Tsichlis and Jennifer Miller at last week's board meeting.

Lindbergh Schools voters just elected two new members to the Board of Education, but a pending appointment to replace board member Kate Holloway may give the runner-ups a second chance.

In what is set to be the new members’ first major decision, the board will select someone May 9 to fill the vacancy left by the February death of Holloway, who was re-elected to a second term last year. Her appointed successor will serve a 10-month term, and the year left in Holloway’s term will be one of four Lindbergh seats up for election next year.

As called for by school district policy and a unanimous vote from the board at the April 12 meeting, a notice of the vacancy that appears in the Call today — Thursday, April 21 — “sets in motion everything,” Superintendent Jim Simpson said.

Before the May 5 deadline, citizens who want to serve on the board have two weeks to fill out a short application and submit a resume. The board will interview them in public and vote on the new member in a special meeting May 9. The new member will be sworn in May 10.

Miller was the top vote-getter and Tsichlis second in a tight contest for the two seats, with 3,655 votes, or 28 percent, and 2,975 votes, or 23 percent, respectively.

Incumbent Ujka and Dave Reinhardt tied for third place in the initial results, but in an April 8 recount, they both earned more votes and Reinhardt bested Ujka for third place by just one vote, 2,822 votes to 2,821. Michael Bitzenburg came in fifth with 641 votes, or 5 percent. The results were still uncertified at the time the Call went to press.

Miller said she was surprised by the results and looks forward to learning from her colleagues on the board.

“It’s kind of a crazy feeling,” she said of earning the most votes. “In Lindbergh in the past, incumbents usually have won. I had no idea going into it that that would be the end result — I had hoped, but you never know.”

Early this week, Ujka, who was elected in 2014 and named a Lindbergh Leader this year, confirmed that he plans to apply for the open position and see what happens.

“Bottom line, it’s about kids and not about me,” said Ujka, who will most miss attending district events honoring student achievement. “I’m only stepping away from the end seat, I’m not stepping away from Lindbergh. I’ll continue to do the volunteer work I’ve always done — I’m green and gold all the way down to my license plate.”

Ujka may have an edge for the appointment since he was supported in his re-election bid by several other board members, and historically Lindbergh boards have filled vacancies with former board members. Most recently, the board filled the vacancy created by Vic Lenz’s appointment to the State Board of Education with former board President Mark Rudoff, who did not run when Ujka won the seat.

After seeing Long Elementary PTO President Reinhardt run such a hard campaign, Tsichlis said he is also encouraging the former Prop G co-chair to apply for the open seat. For years, Reinhardt has attended every board meeting.

“I was really moved with Dave by his passion for Lindbergh, his commitment and passion for the district,” Tsichlis said. “I’ll go out and say it, I think it was the strongest of all of us. He is really, really gung-ho. I looked at him and I thought with this kind of energy, we could use somebody like that on the board and service to the district.”

Simpson said he was surprised both that newcomer Miller was the top vote-getter and that Ujka was voted out, which is disappointing with a board member as “outstanding” as former Rockwood South Middle School Assistant Principal Ujka, a Lindbergh graduate who was frequently seen at district events and is the announcer for the football Flyers.

“Very dedicated, extremely involved in the district Outstanding board member, very solid in his judgement, great team player with the rest of the board, well-liked by the rest of the board, of course a Lindbergh graduate and he grew up in Lindbergh,” Simpson said of Ujka. “It was a big asset for us to have Gary on the board while we did.”

Having Tsichlis on the board will help the city due to his links with and insight into the city of Crestwood, where Tsichlis served as a Ward 4 alderman, Simpson said.

“I know Mike is also very focused on being a board member who is here for the students,” Simpson added.

Simpson also praised outgoing board member Horton, an attorney who was elected in 2010 and re-elected in 2013 and, as the district opposed tax-increment financing, or TIF, for the former Crestwood Plaza site, represented the district’s interests on the Crestwood TIF Commission.

“We’re going to miss Kara and wish her well,” Simpson said. “She did a really good job on the mall. Kara is a very analytical thinker, and she was able to pour through so many of the fine print and minutiae of all of that TIF language and the subcontext of what that means, and she brought a real beneficial perspective to that so we really understood where we were in the process.”