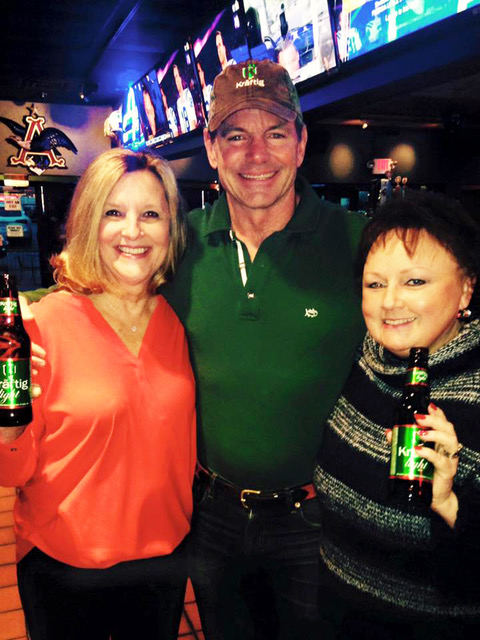 Billy Busch, center, with incoming Sunset Hills Mayor Pat Fribis and Ward 1 Alderman Dee Baebler at a Super Bowl party, in a picture posted to Fribis' Facebook page for her mayoral candidacy in 2016.

With general municipal elections looming next week, tensions among Sunset Hills officials were on display at what was supposed to have been the board’s last meeting before the originally scheduled April election.

For breaking news including an ethics complaint made by Ward 1 Alderman Ann McMunn against Mayor Pat Fribis that City Attorney Robert E. Jones said is not an ethics violation, check back to www.callnewspapers.com.

Following public comment at the March 10 Board of Aldermen meeting, Ward 4 Alderman Thompson Price, who is up for re-election against resident Drew Hrach, publicly rebuked Ward 1 Alderman Dee Baebler. Referring to a radio interview Baebler gave to KMOX about a tax abatement bill in February, Price accused her of presenting inaccurate information to the media.

“For some reason Alderman Dee Baebler has taken it upon herself to be the self-appointed spokesperson for this body, and I for one must say I do not appreciate the idea she thinks her attitudes, thoughts and conducts are those of mine,” said Price. “Inaccurate information and purposefully misleading the media and the public in my opinion is detrimental to all of us and has no place on this board.”

Price went on to say that Baebler should have clarified that her thoughts were her own, not that of the board’s and that in most instances, she should have not said anything at all and forwarded any concerns to board President Mark Colombo, Fribis or City Administrator Eric Sterman.

Baebler, who is not up for re-election this year, has lately sided with critical residents on various issues and hosted a town hall alongside mayoral candidate John Stephens and Ward 3 aldermanic candidate Cathy Friedmann.

Fribis, who had historically been close with Baebler, was the next to criticize the Ward 1 alderman for a Facebook post she made about the Winter Brothers project, suggesting that the project was secret and was a quid pro quo with the city since Fribis had gone on a church trip to Israel with Tom and Jan Winter in January 2019.

Winter Brothers, a sand and gravel mining company, plans to create a business park on property between Gravois Road and the Meramec River. The planning commission considered the concept plan in May, before it went to aldermen in February. No formal plan has been approved by the planning panel or the aldermen, although some residents have expressed their concerns that the grading work and dirt fill the Winter Brothers plan to do at the site will exacerbate flooding along the Meramec River.

“I was accused… of not telling anyone about the Winter Brothers project because they were my friends, which is totally false,” said Fribis, who added that the concept plan for the Winter Brothers project first appeared before the city’s Planning and Zoning Commission last May and that all proper laws had been followed by the city. “I think Sunset Hills is one of the most if not the most transparent cities… So I think that our city, our residents, our staff, our aldermen and myself deserve an apology.”

However, Baebler did not back down, pointing out that Fribis had gone on the church trip before the project came to the planning panel. Fribis denied that any city business was discussed on the trip, and said that Tom and Jan Winter were no longer involved with the business.

“That’s accusing me of something that is against my character and my integrity, and I take great offense to that,” said Fribis.

“This is a big deal and this is going to greatly affect the residents of Sunset Hills,” Baebler retorted. “It’s a detrimental decision to the community, and it’s easy enough to bring… residents in and talk about these things.”

At last week’s meeting, Public Works Director Bryson Baker said that the Winter Brothers’ fill has served its purpose in showing that the lots can sustain the weight of a building and will be removed.

“I know there’s residents and even aldermen who feel that that dirt is going to stay there and affect the flooding,” Fribis said, and Baker again confirmed the dirt will be removed from the site.