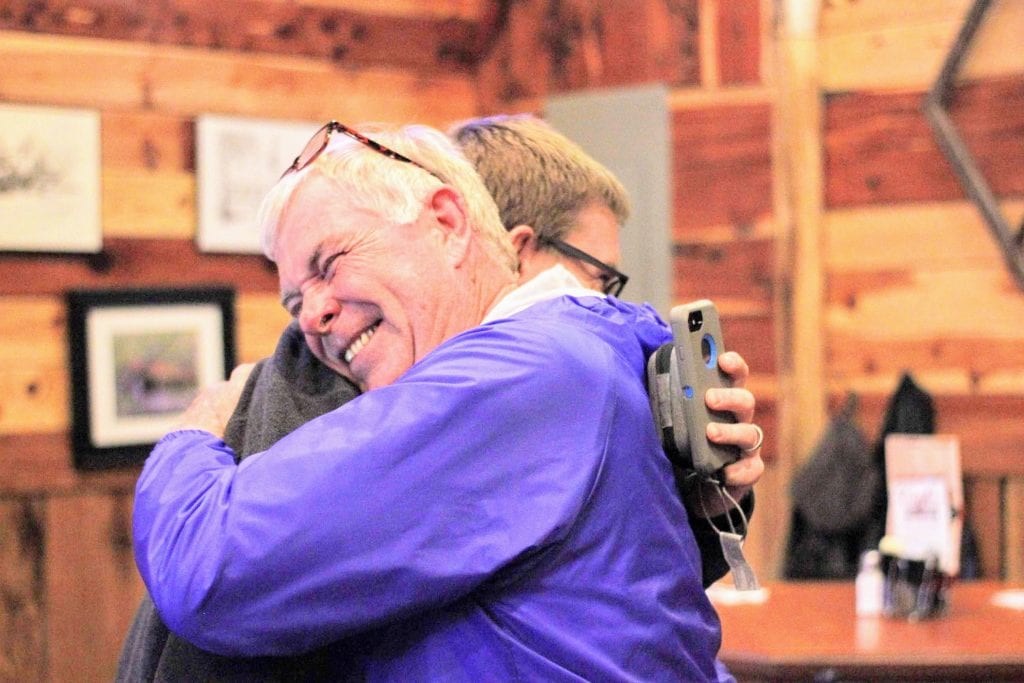 It took until nearly midnight, but the final results are in for St. Louis County and the state. Check back all night for the latest vote totals.

Locally, it was a “red wave” of sorts in the most competitive races in south county.

And incumbent Rep. Mike Revis, D-Fenton, lost to Republican challenger Mary Elizabeth Coleman, a former Arnold city councilwoman, in the 97th District House race. Revis won election in a special contest in February that made national news because the district had gone for President Donald Trump in 2016.

All the results are unofficial and will be certified two weeks from Election Day.

Bond issues need 57 percent to pass, and Prop F failed in April because it did not receive that supermajority.

Mabie will succeed former Mayor Gregg Roby, who resigned office in June due to health reasons. He will fill the rest of Roby’s term, which will end in April 2020.

Mabie wrote on Facebook, “It was great to see such outstanding turnout and participation in American democracy yesterday, and I am grateful and humbled by the support I received from the voters. Thank you to everyone so much for your support and placing your trust in me…  I also wanted to especially thank Mayor Roby, Acting Mayor (Tony) Kennedy, and the Aldermen who believed in me and supported my candidacy. I also wanted to commend Mr. Court and Mr. Brown for running positive, issues-based campaigns.
“I promise to keep working hard to keep Crestwood moving forward and making Crestwood a better place. Thank you again for your faith in me, if I can ever be of assistance to you, or if you have a question or concern about Crestwood city business, please do not hesitate to reach out to me.”

“Well, you did it!!! Thank you for your great support,” Fitch posted on Facebook. “I look forward to serving the citizens of St. Louis County again!”

Stenger was leading the field for county executive after absentee ballots are in with 54 percent of the vote, followed by Berry with 40.66 percent, Kasoff with 3.33 percent and Ostrowski with less than 1 percent.

Zimmerman led in absentee ballots with 59.83 percent of the vote to 38.37 percent for Hyatt.

The incumbent legislator addressed the disappointing overall results for Democrats in a Facebook post Wednesday: “Today is a hard morning for many to wake up to (myself included). It is easy to feel hopeless. And Dems have every right to be upset. But. Turnout this election was incredible…”

“Thank you to the voters of the 94th District,” Murphy posted on Facebook. “I am honored that you have elected me to be your state representative.”

Pretto alluded to her husband, Joe, as she posted, “Well, as Joe so eloquently put it, I need to get a j-o-b. I can’t believe what a gigantic number 356 is. That’s how many votes separated me and watching out for the best interest of our community in Jeff City. I thank the 7,138 voters that came out and voted for me. A huge thanks to the folks that stood with me, encouraged me, and never doubted for a moment that I would have their back in the House. It’s been an arduous experience, one I’ll never forget.”

Rep. Bob Burns, D-Affton, who won a fourth term unopposed Tuesday night, commented on Pretto’s post, “Keep your head high Jean, you did one hell of a job!!!!”

“Thank you to the people of Oakville for your support. It will be an honor to serve you,” O’Donnell posted on Facebook.

In districtwide results in this district mostly in Jefferson County, Coleman defeated Revis 56.34 percent to 43.55 percent, or 7,203 votes to 5,568 votes for Revis.

Coleman posted a photo of herself and Wagner at a watch party to Facebook and wrote, “WE TOOK BACK THE 97th!!”

Revis posted to Facebook, “It has been a tremendous honor to serve the community that I call home. I’m so grateful to have had the love and support of my family and friends to even consider ever having made this a reality. As I’ve said many times, I’m the proud son of a carpenter and a teacher. At the age of 26, I decided to set aside my career to right wrongs that were happening in our state. I set out to be a voice for working families, defend labor, and protect our public education system. I made hard choices to take strong stances to support the will of the people of this district. Together we defeated right-to-work. Unfortunately, it appears as though the people of Missouri thought that that one vote was enough to go back to their old ways and think ‘surely they won’t try it again.’”

Although the west county 98th District is not in south county, it is of interest to south county residents who are familiar with one of the contenders. Retired Lindbergh Schools Chief Financial Officer Charles “Chuck” Triplett, an Ellisville resident running as a Democrat, lost to incumbent Rep. Shamed Dogan, R-Ballwin, 60.66 percent to 39.18 percent, or 11,316 votes to 7,309.

In districtwide results, Wagner won with 51.28 percent of the vote to 47.09 percent for VanOstran, with 463 precincts reporting.

Clean Missouri, an amendment to the Missouri Constitution that brings ethics reform and a new form of redistricting to Missouri lawmaking, was approved by both state and county voters.

Voters approved the legalization of medical marijuana both statewide and countywide. In the state, medical cannabis received 65.54 percent of the vote to 34.46 percent, or 1,572,592 votes for and 826,777 against.

Brad Bradshaw’s constitutional amendment to legalize medical marijuana and use the proceeds from a 15-percent sales tax to fund a research institute headed by him was rejected by 68.56 percent of voters statewide, with only 31.43 percent “yes” votes. In all, 1,631,228 voters cast a ballot against Bradshaw’s amendment and 747,977 voters said yes.

Proposition B — Raising the minimum wage