ELECTION 2017: Kolb looks to unseat Hilmer in April 4 election for MFPD board

Kolb, Hilmer vying for a seat on fire board in April election 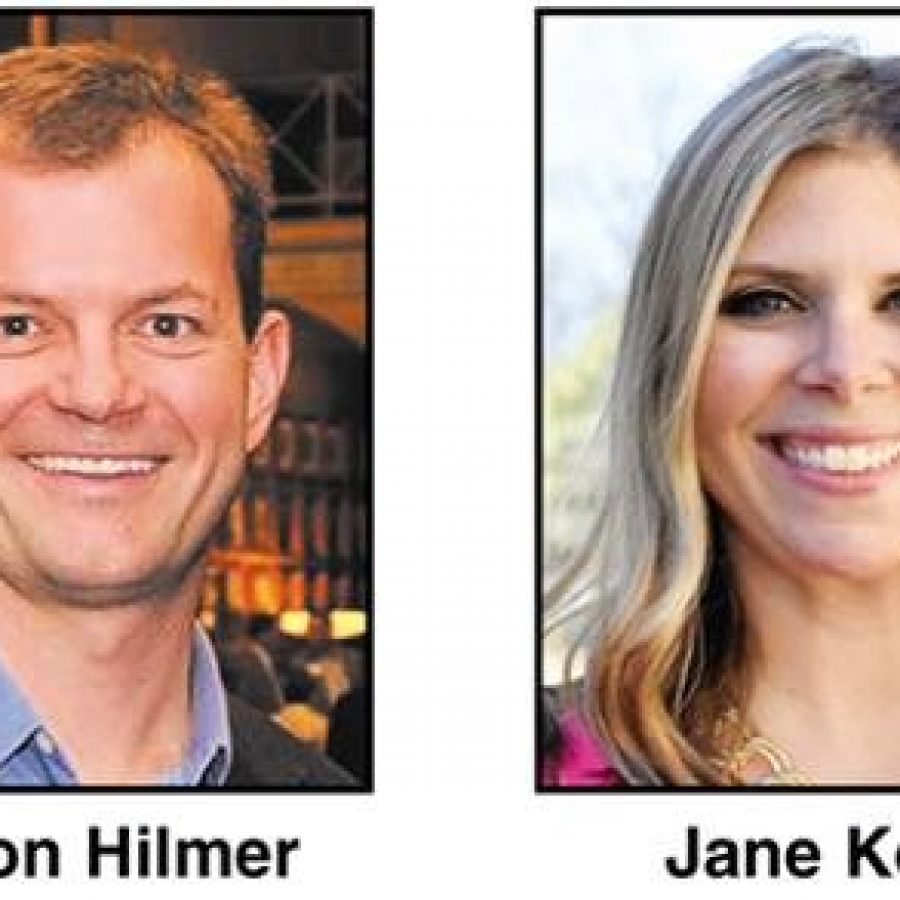 Political newcomer Jane Kolb of Oakville is challenging incumbent Aaron Hilmer of Oakville for a seat on the Mehlville Fire Protection District Board of Directors in the April 4 election.

Hilmer first was elected to the board in 2005, running on a reform platform along with current board Treasurer Bonnie Stegman. He said he is seeking re-election to continue and enhance the reforms and service improvements enacted over the past 12 years.

When Hilmer sought re-election six years ago, supporters of his opponent, Mike Klund, spent nearly $100,000 in an effort to defeat him. Primary contributors to Klund’s campaign were the International Association of Firefighters and its then-Mehlville shop, Local 1889, which since has merged with Local 2665.

Kolb contends Mehlville has an excessive number of employees leaving for jobs with other fire agencies, and says she wants to see Mehlville return to a “destination district” for first responders.

 “Voters have a clear-cut choice to continue forward with the amazing work that I’ve accomplished, or go backwards with my opponent, who is backed by the firefighters’ union,” Hilmer said.

 “The single most important issue in this race is the revolving door of skilled first responders, as we hire them and train them, only to watch them leave in search of better working conditions,” Kolb said.

He said he is seeking re-election “to continue what I’ve proved for 12 years, that it is possible to increase services while decreasing taxes and to ensure the district is run for the benefit of residents.”

Kolb, 36, 5022 Crosswind Drive, Oakville, is a quote administrator for her family’s insurance agency. She is married to Tim Kolb, a firefighter/paramedic with the Monarch Fire Protection District.

Kolb, who has not held elective office, said she is seeking election “to return Mehlville FPD to (a) destination district with competitive recruitment and retention programs.”

Hilmer said, “Absolutely — and not just Chief Hendricks, but the entire administrative staff. It is a night-and-day difference to the mostly inept and dishonest administration I inherited in 2005.”

Kolb said, “I’m neither wholly satisfied nor dissatisfied with Chief Hendricks. I think the community and his staff are important to him and he works effectively within the constraints set on him by the board.”

Hilmer said, “Absolutely not. We lose 2 percent of our employees a year to other fire departments. For my opponent to attempt to make this a campaign issue, shows how uninformed she is about district matters. We just had 147 applications for three positions.”

Kolb said, “Of course I do. I’ve said from the beginning that employee retention is an issue. It’s just irresponsible for our district to be dismissive of this issue, especially in an industry where turnover is not just costly, but a threat to public safety.”

Hilmer said, “Yes. I voted to implement it and fund it ­— just one more step forward we have made for residents.”

Kolb said, “I find this to be inconsistent with current trends to not utilize the services dual-trained first responders can provide both as firefighters and paramedics.”

Hilmer said, “Yes. This is by far the biggest single improvement I have done for residents. We now have 14 vehicles with paramedics versus five when I was elected.”

Kolb said, “I think following the trend of having medics on pumpers was the right move. However, I question the hiring of critical care paramedics who are limited in the service they can provide the community.”

Hilmer said, “It is undeniable that it is — absolutely indisputable. In every aspect it is better off — service improvements, infrastructure rebuilt and taxes reduced.

“Residents have never had it better.”

Kolb said, “I don’t believe so because in 2004 Mehlville was a destination district capable of recruiting and retaining eager, highly qualified, skilled employees. The public-safety industry relies heavily on experience obtained on the job, which makes retaining employees paramount.”

Hilmer said, “I’ve never been more proud of the training the district does. In 2005, training was non-existent. We have invested hundreds of thousands of dollars in our workforce training.”

Kolb said, “I don’t believe anyone outside of the first responders who receive the training can determine the level of satisfaction. I believe it is the chief’s responsibility to ensure our first responders are receiving exemplary training by communicating those needs to the board.”

Hilmer said, “No, and any candidate who is endorsed and bought by them should be declared unfit for office.”

Kolb said, “Yes. I will accept support and contributions from associations, committees and other groups who share my desire to see MFPD return to a destination district. Area first responders are among my many supporters.”

Hilmer said, “Not only did I vote ‘yes,’ I was the architect behind them. One of my proudest accomplishments was giving voters a historic chance to vote on a tax decrease.”

Kolb said, “While born and raised in Mehlville, my husband and I lived in St. Louis City from 2006-2010. Therefore, I did not vote on those issues.”

Hilmer said, “Yes. The district has never been in a better financial position — pretty incredible considering reserves were non-existent in 2005, and we rolled back the tax levy, saving over $100 million in taxes on residents.”

Kolb said, “The current amount of reserves appears to be adequate for the current board’s emergency services priorities.”

Hilmer said, “Non-existent. All I have seen from them is 12 years of lawsuits, threats and snarky demand letters. However, I have always given them a chance to address the board.”

Kolb said, “A healthy relationship between employer and employee is good practice in any industry. Currently, and admittedly by Chief Hendricks, that relationship does not exist between the firefighters and the board.”

Hilmer said, “Absolutely — the biggest were to the pension/disability, health insurance and workers’ compensation. We proved it’s possible to fix problems without throwing money at them..”

Kolb said, “I support reforms if they are in the best interest of the taxpayers and do not compromise our emergency service or personnel. Fiscal responsibility and a satisfied workforce are not mutually exclusive.”

Hilmer said, “Yes, though I doubt that will happen.”

Kolb said, “I would not make that determination until more information was available after objective studies and open dialogue involving all stakeholders had taken place.”

Hilmer said, “No. This was put in place before my time on the board and if eliminated, would put a $2.5 million hole in our budget. That would require a 10-cent tax-rate increase.”

Kolb said, “No, I don’t think ambulance billing should be eliminated. However, I would entertain a financial analysis and assessment.”

Hilmer said, “Yes, and we proved this possible by building four firehouses, buying eight fire trucks and 11 ambulances — all with no debt or asking voters for more money.”

Kolb said, “I believe all options should be considered for any purchase to ensure the maximum benefit for the taxpayers.”

Hilmer said, “I’m proud to be the most open and accessible fire department in Missouri.”

Kolb said, “I’m skeptical that the current board fully adheres to the spirit of Missouri’s Sunshine Law, considering that the average board meeting lasts less than 15 minutes before moving to a closed session. If I believe the board is at any time failing to comply with the law, I will alert the board to my concerns, have it shown in the minutes and then contact the attorney general’s office immediately following the meeting.”

Hilmer said, “Yes. It was the largest reform I spearheaded. By taking action when we did, we stopped the underfunded/outrageous defined-benefit pension plan from becoming a crisis.”

Kolb said, “I would hope that all alternatives were considered and fully researched before this decision was reached. I cannot say that was done.”

Hilmer said, “Yes. I have proved that services can be improved while cutting taxes. We are a true American success story. Residents and employees have never had it better.”

Kolb said, “No. The micromanagement of the chief and his administration by the board prevents the district from moving in the right direction.”

Hilmer said, “I already rolled back the rate an unheard-of 40 cents (per $100 of assessed valuation). At this time, the rate is at the level necessary to be run properly.”

Kolb said, “The board has the responsibility to set the lowest tax rate possible while meeting the needs of the district, and I support setting tax rates through voter approval to meet these goals.”

Kolb said, “Yes. I believe the taxpayers of Mehlville deserve to have the opportunity to make an informed decision about both candidates.”

Kolb said, “When elected, I will attend a higher percentage of meetings than my opponent has in his very long 12 years on the board.”

Kolb said, “As of today, I have received many individual endorsements and continue to receive endorsements, all of which are listed on my (campaign Facebook page).”

Hilmer said, “No. The district is properly funded for the foreseeable future.”

Hilmer said, “Yes. This is just one more of many steps that I have made in moving the district forward — all done with no debt.”

Kolb said, “I support any advances with regard to training and improvement. However, I oppose rash decisions motivated by political showmanship. I think a committee of professionals should be put in place to identify the best use of space, justify costs, leverage benefits and to ensure there are no redundancies in scenarios.”

Hilmer said, “Yes. The upgrades to our dispatch, vehicles and trained personnel is amazing, especially compared to 2005 when Mehlville had some of the worst — if not the worst — hiring standards in the county.”

Kolb said, “Medical errors are now the third-leading cause of death in the United States. So while response times are important, because of the district’s high turnover rate, I’m even more concerned about whether or not we have highly qualified, experienced first responders.”

Hilmer said, “Yes. The district has never been in a stronger position. The debt I inherited has been paid down dramatically.”

Kolb said, “No. Due to my opponent’s apathy for the retention issue, millions of tax dollars invested in human capital have been lost to other fire districts.”

Kolb said, “I don’t believe anyone outside of the first responders who operate the equipment can determine the level of satisfaction. That being said, I certainly hope the chief, with input from his staff, is able to communicate the district’s needs to the board with regard to equipment.”

Hilmer said, “The district’s facilities have never been in better shape. At some point, work will need to be done on House No. 6 and No. 7. We are saving money for this now.”

Kolb said, “I’m not a first responder who spends a third of my life living in our district’s facilities, but I would continuously engage our front-line staff to address facility needs or improvements.”