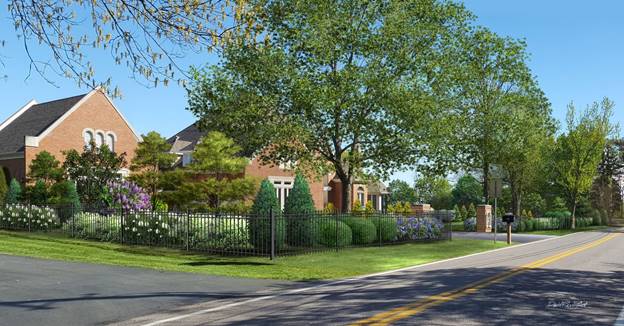 This is breaking news. Check back for updates.

The owner of a residential eating-disorder group home proposed for South County has filed a lawsuit against St. Louis County over zoning after the county reversed its decision to allow the facility to open without going through the rezoning process.

“We sincerely regret that we have been forced to bring legal action. We feel the County’s actions unlawfully discriminate against individuals with protected disabilities,” said Jennifer Gallagher, Monte Nido’s chief development officer, in a statement announcing the lawsuit. “We have tried every avenue to have a conversation with the County, Councilmember Ernie Trakas, and the concerned neighbors to allay misconceptions about this residential program for individuals suffering from eating disorders. We are especially dismayed that the County is disregarding this critical need for access to these resources during the Covid-19 pandemic, which has exacerbated a wide array of behavioral health issues for so many people.”

At first, county planners told Monte Nido that its purpose as a treatment facility was allowed to operate in the Oakville residential neighborhood under laws that allow those types of uses in any zoning area for group homes targeted toward disabilities. In that type of zoning, no public hearing has to be held, no official notice has to be given to neighbors and no recommendation from the Planning Commission is required as would happen in the typical rezoning process.

With the zoning seemingly in hand, the company said it “made a significant investment” of more than $1 million and bought the 14,000-square-foot property off Christopher Road in Oakville.

But after an outcry from the facility’s immediate neighbors when they saw the company moving in, County Counselor Beth Orwick’s office reviewed the zoning again at the urging of 6th District Councilman Ernie Trakas, R-Oakville. County attorneys issued an opinion in late summer that despite the earlier ruling, the group home did not meet criteria for zoning without a public hearing and in order to move forward, Monte Nido would have to go through the usual zoning process and meet criteria that the land it bought does not meet.

Trakas  — who is being challenged for re-election in the election Tuesday, Nov. 3 by Rep. Bob Burns, D-Affton — pressed county officials to review the decision to grant zoning to Monte Nido without holding any type of public hearing.

He told The Call in June that he had “numerous communications with the counselor’s office demanding the review, obtaining it and laying out. I expect a comprehensive look at what exactly went on, when it went on and who did what.”

In a letter to The Call in May, Trakas said, “For some time I have silently railed against the machine of St. Louis County government. Because of the events surrounding the silent review and approval of a commercial Medical Treatment Facility in a residential neighborhood I can no longer ignore the obvious and remain silent. … Despite Monte Nido’s obviously questionable and controversial proposal, no one in either department (planning or county counselor) saw fit to notify and/or include my office in the review and consideration of this clearly controversial proposed use so I could advise and represent the interest of my constituents.”

Trakas said the initial Monte Nido review was done “behind the scenes” by planners and the county counselors “performed a perfunctory, as in none whatsoever, review and gave the Planning Department the green light.”

The councilman continued, “It is time for many in county government, from the top down, to realize the biggest customer it services is unincorporated St. Louis County. It is neither right nor proper to take advantage of residents who, in large part, are paying county salaries, while the very individuals whose livelihood they provide assist corporate predators like Monte Nido in forever changing the character and quality of their neighborhoods.”

Monte Nido has been working on this project for more than a year, and the company said “during this process the county provided multiple assurances in writing that the project meets land use standards as a group home for up to 8 residents. State and county laws provide that such group homes are allowed by right for individuals with physical or mental disabilities.”

But neighbors went to the St. Louis County Council at a series of meetings last spring to object to the group home. Residents around Christopher Road sent in so many comments that the subject dominated public comments at several council meetings, videoconferenced due to the COVID-19 pandemic.

Neighbor Rich Ellis said in a comment submitted for the videoconferenced April 21 council meeting, “I am concerned for the safety of residents and our neighborhood environment that a private equity owned company will be running operations out of what was formerly a single residence. We are fortunate that our kids are older but I am especially concerned for the families of young children in the immediate area with additional traffic and strangers rotating through. There is no way to justify classifying Monte Nido’s newly purchased property as a ‘handicap long-term group home’ as I understand their clients are short-term residents (patients housed while receiving short-term treatment). Please do the right thing and stop this company from operating a business from our neighborhood.”

Monte Nido said the decision to reverse the zoning was “based on pressure from a small group of vocal neighbors who opposed the group home in the neighborhood. The fact is that there are many group homes for different physical and mental health disabilities located in residential areas throughout the County, and a Christian retreat center is already located on the same street less than half a mile from the Monte Nido property.”

Based on national prevalence rates, Monte Nido estimates there are at least 95,000 residents battling eating disorders in the St. Louis metro area. Despite this need, there are currently only two residential treatment programs in the area.