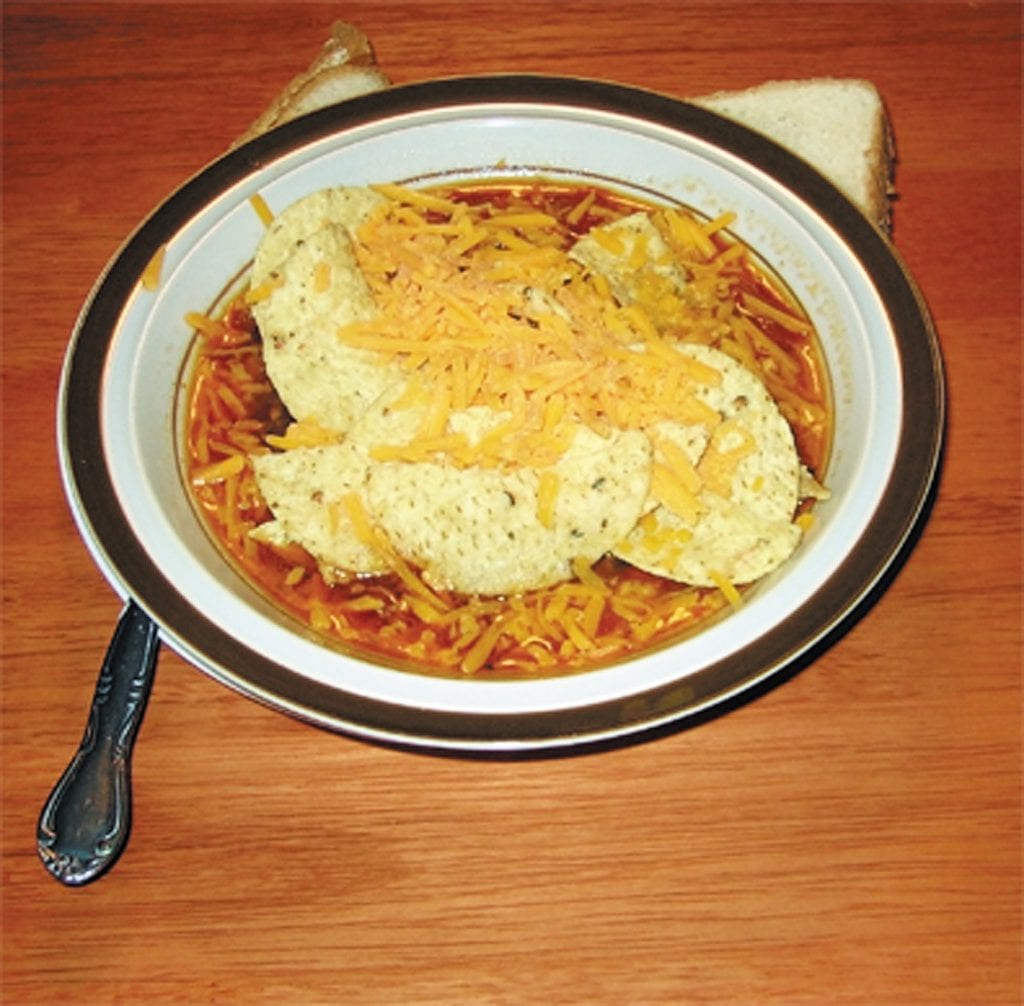 Chili tastes even better when topped with tortilla chips and some grated cheddar cheese.

Even if a guy doesn’t know the difference between boiling or braising, he believes he can cook because he makes delicious chili.
It’s a guy thing, just as sure as not needing to ask directions. I can find any address if I have a full tank of gas.
Because everyone is born with an innate ability to make good chili, it seems silly to bother writing a recipe for the stuff. But then the world would be cheated of its opportunity to know how I make my chili.
Before I go any further, I want to let you know that I don’t subscribe to that Texas nonsense about making chili without kidney beans. By God, them beans is good.
The only time it’s permissible to make beanless chili is when you’re serving chili dogs. Everyone I’ve ever known uses beans in their chili. I’ve eaten at restaurants in every state in America and it’s always served with beans.
Yet, when you watch these silly cooking shows on television, they feature misguided souls who claim beanless chili is the only real chili. That’s like saying the only real sandwich is made without bread.
Chili
1 large onion
4 garlic cloves
2 tablespoons olive oil
1 28-ounce can diced tomatoes
2 celery stalks, diced
1 small can tomato paste
2 pounds bottom round roast
6 cups beef broth

Heat stockpot over medium-high heat.
When pot is hot to the touch, add olive oil. When the pan is hot enough to cause the oil to sizzle when it touches, add the onion and garlic and saute for eight minutes or until the onions turn translucent.
Some browning of the onions will only add color to the chili, but burned garlic may make the chili bitter tasting.
After four minutes, add the celery and tomato paste, stirring constantly.
Cut the roast into bite-sized chunks and brown the meat on all sides. This process should take four to six minutes. Stir the whole time to prevent burning.
Add beef broth to chili and bring to a boil. Reduce heat to medium-low, cover and simmer for three hours.
Add all but a half can of kidney beans.
Puree those beans in a food processor and then add to the pot of chili for thickener.
Add remaining spices. Increase heat to medium and simmer for 30 minutes.
Serve garnished with tortilla chips and cheddar cheese to taste.