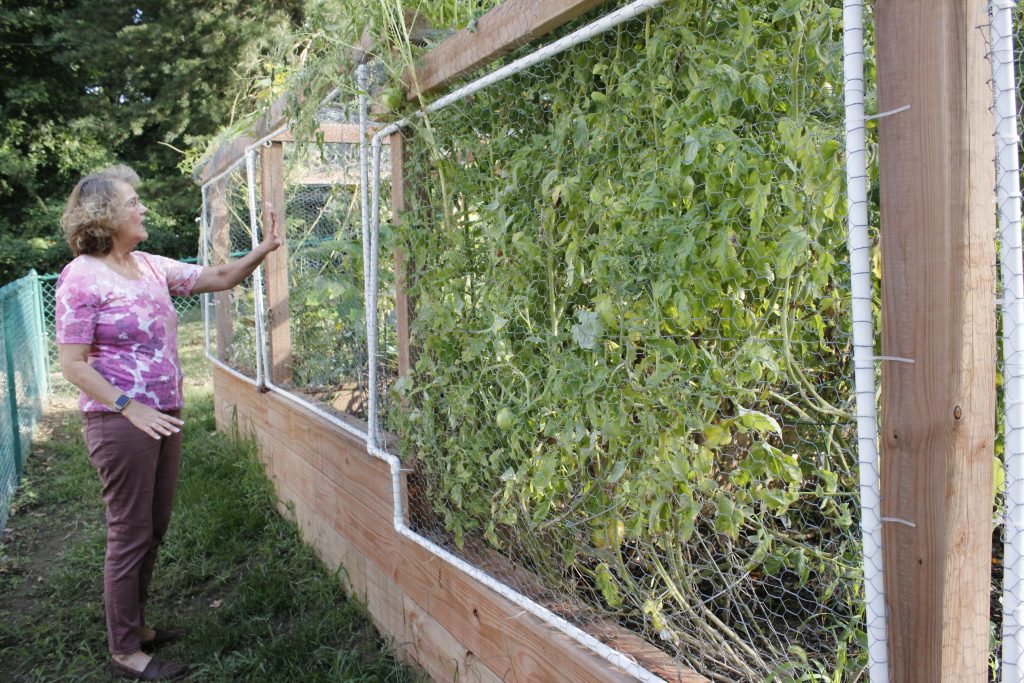 A Safe Place staff member Barb Tenholder points out the three levels of the garden planted at the shelter in Jefferson County. The peaceful garden is a place for women and children to heal from trauma.

Residents at a domestic violence shelter in Jefferson County have experienced healing through gardening thanks to the generosity of the South County community.

The women living at A Safe Place in Jefferson County have been enjoying fresh vegetables and tending to their new garden after the Oakville Garden Club and Faith Lutheran Church teamed up to build a garden at the shelter this past spring.

It’s one of many initiatives to assist the shelter, which has space for six women escaping domestic violence and their children with 25 beds total, including children. The location of the shelter is kept secret for their safety.

The Oakville Garden Club, which is part of the National Garden Clubs of America, has been working with A Safe Place for many years, said member Connie Lohse. Each garden club has a cause that they work on, and the Oakville club holds feminine hygiene product drives for the residents at A Safe Place.

The idea to build the garden was planted when Barb Tenholder, a staff member at A Safe Place, approached a member of the Oakville club and asked if they would be interested in helping build a garden for residents at the shelter.

“I had a couple of residents here and they were really interested in growing things. We started with just pots… every night we’d put the pots in a wagon and tow them inside, otherwise the critters would have gotten them. We were growing tomatoes and things, and they were so excited about it,” said Tenholder. “One day a woman walks in our shelter and she’s bringing in some clothes and donations and things, and she mentioned she was from the garden club. I said, ‘Oh gosh, do you think you guys could help us?’… So a resident and I went and talked to the garden club about how important gardening was and how healing it was to her.”

After hearing directly about the impact of gardening in healing the women at the shelter, the 28 members of the Oakville Garden Club voted to build a garden for A Safe Place. Since the garden club is not a fundraising organization, members came together and pooled money out of their own pockets.

“Out of the generosity of each person, we were able to get together $300 to start the garden,” said Lohse, who added that one of the members of the garden club also approached her pastor at Faith Lutheran Church, who said that the church would be willing to help the garden club. Faith Lutheran matched the club’s $300.

“We all went out and dug up the ground by hand and tilled it… When we first thought about how to help build the garden, we were originally thinking just a typical plot… Well, the Faith Lutheran member, he designed this three-level garden with fencing. It’s really advanced, and it’s huge. It’s so big,” said Lohse. “It probably took three weeks to dig out everything… It turned out to be such a fun activity. Everyone was so happy. We worked really, really hard digging and wheelbarrowing and cleaning” the land out.

Construction started at the end of March and took about three weeks to clear the land, level it and till it. Husbands of garden club members and men from Faith Lutheran built the actual structure, in addition to hauling and spreading five pickup trucks’ worth of topsoil and mulch, which was donated to the garden club by local nurseries.

Once the garden was constructed, it was time to plant. Garden club members, in addition to the local nurseries, donated tomatoes, zucchini, squash, carrots and other vegetables. In addition, Lohse wrote a grant to the Ames tool company for gardening tools. Ames ended up donating $350 of new gardening tools to A Safe Place.

“A Safe Place had nothing. No hoses, wheelbarrows, nothing. Everything we had been using to build this garden was donated by the people building it. Then all the tools. These Ames tools are so nice. Steel and wood handles. They’re gonna last forever,” said Lohse. “We went out… and held a really nice barbecue. We had the tools and we were showing the residents how to use them. The children were just adorable. There were five to six really nice hand tools made just for children.”

To prevent animals and birds from getting into the garden, volunteers set chicken wire along the perimeter and top of the garden. The chicken wire can be removed so residents can get in and garden and pick the vegetables.

“The kids always think it’s neat… they’ll come running into my office, ‘Ms. Barb, there’s red tomatoes out there, can we pick them?’” said Tenholder. “You just get them interested in where their food comes from, what’s healthy eating and all that kind of stuff.”

The garden not only provides the residents of the shelter with food, but also gives them a peaceful space where they can heal from past traumas.

“These women… they’re so nice and such good people. They’ve gone through terrible things, they’re really rebuilding. Learning how to garden is kind of a peaceful thing. It’s a peaceful activity for them. We call it the ‘peace garden,’” said Lohse. “It’s a healing garden, is really what it is. They can go out there and be with their kids or by themselves and get their hands dirty and watch things grow… It’s a real positive thing. Unless you garden, you can’t understand how beautiful it is to see something grow.”

Tenholder said the feedback from residents about the garden has been extremely positive and helps foster long-lasting relationships between the residents and the shelter.

Most residents at the shelter stay an average of three months, but duration of stays varies depending on the situation of each resident.

“They have loved it. Most of them have said they’ve always wanted to have a garden. And the nice thing is we’re the type of shelter where our residents can come back,” said Tenholder. “So when we do special events and barbecues they can come back. So next summer, they’ll be able to come back and share in the bounty (from the garden).”

The garden club’s effort is one of many donations valued at the shelter.

“The community is so wonderful and just really takes care of these families,” said Tenholder. “Not only this garden club… Everything that the community does to be part of making sure families can grow and be safe and that these ladies can go on and have a good, violence-free, peaceful life I think is so important. Just wonderful, loving people that go out of their way to do this awesome stuff.”

Those who are interested in donating to A Safe Place or volunteering can contact the shelter at 636-232-2313.