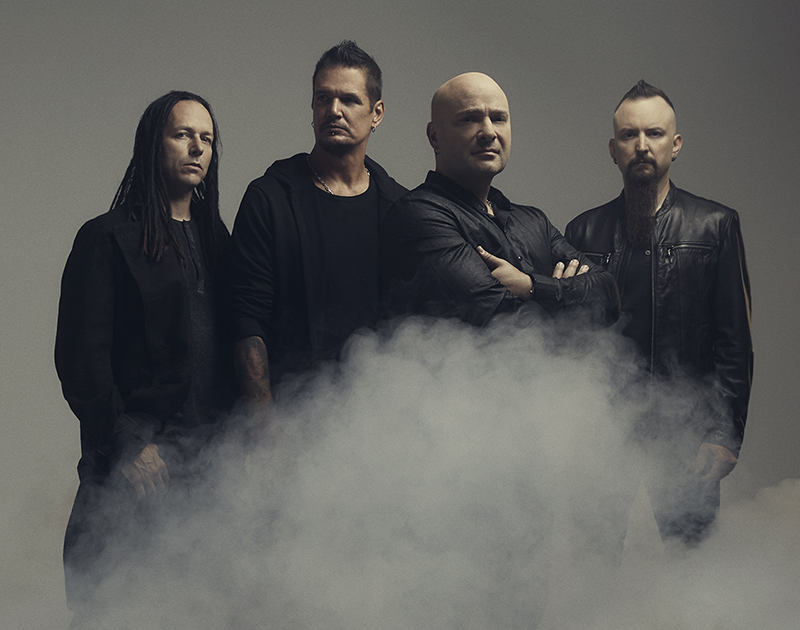 By L. Kent Wolgamott
For the Call

On tour after tour, the hard rock/heavy metal band Disturbed listened to a heavy-metal playlist in the dressing room before its shows. On its last tour, however, the music changed.

That transformation led to “Evolution,” the band’s new album, which has as many acoustic-rooted ballads as hard-riffing rockers.

“Our drummer Mikey (Wengren) always had the all metal i-whatever, iPod, iPhone, but this last tour we started listening to all the classic stuff — the Eagles, Fleetwood Mac, Styx, REO,” said singer David Draiman in a recent phone interview.

“The list goes on and on — Journey — the great classic bands from that era. Those amazing records, they have such an amazing diversity,” the vocalist said. “We were: ‘Let’s try to recreate the journey so many of those classic records took you on.’”

There was a second, equally important element that factored in to the making of “Evolution,” a title that describes not just the sound on the disc but what has occurred to Disturbed in the last three years.

That seemingly impossible crossover was spurred by Disturbed’s dramatically anthemic, largely electric guitar-free version of Simon and Garfunkel’s “The Sound of Silence,” released in 2016.

It went to No. 1 on the “Billboard” magazine Hard Rock and Mainstream Rock charts and became the band’s highest charting single ever on the Top 100. It sold more than 1.5 million digital downloads and was streamed more than 54 million times. The music video has had over 453 million views, and the live video of the band’s performance on “Conan” has been viewed more than 85 million times. It’s also been used in the soundtrack for “The Blacklist” and the video game “Rock Band 4.”

Draiman said Disturbed didn’t have a clue that any of that would happen when it recorded the song and decided to issue it as a single and music video.

“How could we?” he asked. “It really, within the genre, was unprecedented. Never in a thousand years would I have dreamed it would be that massive and be used in all the places I’ve heard it used, figure skating, ‘Dancing with the Stars,’ with the 9-11 Memorial and getting the blessing from Paul Simon, when we met him last year on Maui. The thing, surreal doesn’t cover it.”

The success of “The Sound of Silence” let the band give itself permission to do something it had been thinking about trying for years — make an acoustic EP.

“This time around, we just started doing the acoustic stuff and trying to create that,” Draiman said. “When we started creating those songs, they were so strong, powerful and anthemic, it didn’t fit just having it on an EP anymore.”

So add some hard rock compositions to the acoustic-rooted tracks and you have “Evolution,” a record from a band and a lyricist in Draiman with something to say — addressing big issues of death, war, addiction and political division.

“Over the past two records, we’ve gotten much more direct, much more storytelling, much less open to interpretation,” Draiman said. “It’s a more honest way, a more open way. It’s an understanding that comes with getting older and seeing the world in a different way and seeing each other in a different way. All we’re trying to do is be honest — true to our heart, the passion of the music, and do it honestly.”

Several songs on the new record, including “Ready to Fly,” “Hold on to Memories” and “Already Gone,” pay tribute to Chester Bennington of Linkin Park, Vinnie Paul of Pantera and Chris Cornell of Soundgarden and Audioslave, each of whom died during the time when the album was being written and recorded.

“There are multiple songs on the record that deal with the subjects of pain and loss and addiction,” Draiman said. “Those poor lost souls, my friends, our friends, how could they not be part of the fabric of the record? It had to be there because it affected us so much, not only them, everyone in the band lost someone. I lost my grandmother. It’s a main theme of the record.”

That said, “Evolution” has its share of hard-rock assaults of the sort that Disturbed has been making since it broke through with “The Sickness” in 2000. Among them is “Are You Ready,” the opening track that jumped to the top of the charts when it was released as a single last year.

“That’s Disturbed 101 for sure,” Draiman said. “It was not only Disturbed 101, it had one of the strongest hooks on the record. It was an obvious first single for us… and it’s done a lot for us.”

Draiman was speaking from Honolulu, Hawaii, where he recently moved after spending years in Austin, Texas.

“My kid was ravaged by Austin allergies. He had to live life like a boy in a bubble. It was a nightmare. I got him the hell out

of there,” Draiman said, noting his son’s allergies are much better now.

But the singer hasn’t been in Hawaii much this year, as Disturbed hit the road from January through March in North America before trekking through Europe from April through June.

Now the band is back in the states for a fall run of arena shows, including Chaifetz Arena in St. Louis Friday, Oct. 11.

“This is the biggest undertaking we’ve ever undertaken as just us,” Draiman said. “We’re really taking the next step up. It’s going to be ‘an evening with’ a two-hour set that covers our entire career, production that we’ve never had before.

“It’s going to be exciting, not only for the people coming to see it, but, in truth, for us,” he said.