Districts weigh what do do on fall sports; Trakas slammed, but says he’ll rein in Page 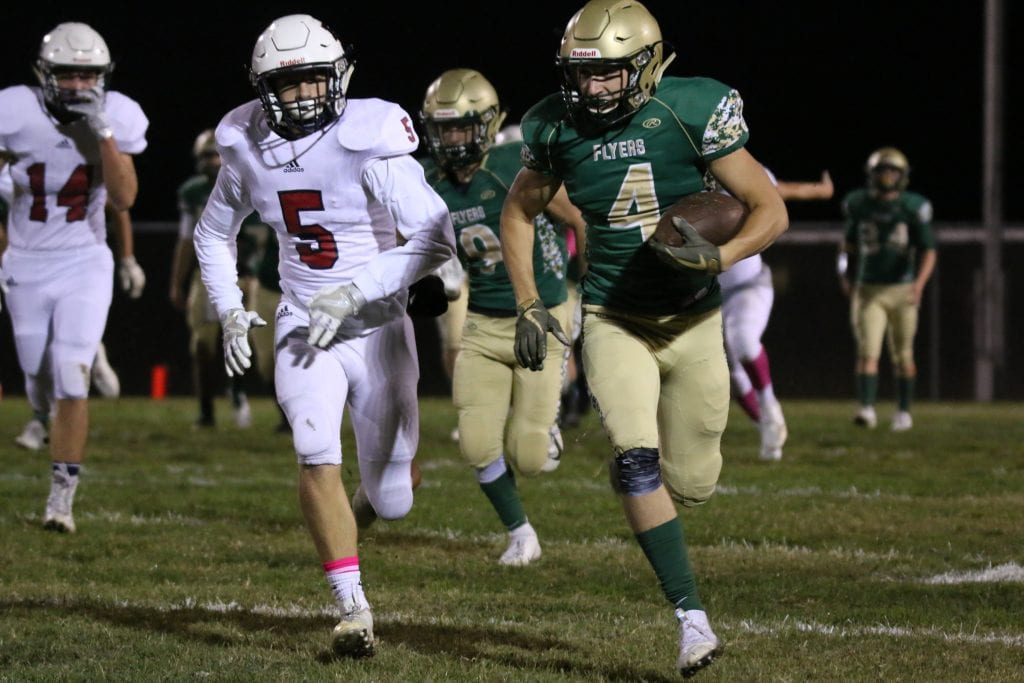 Lindbergh football senior Nick Roth, right, carries the ball during a Flyers’ victory against Parkway South during the 2018 football season at Lindbergh. The Flyers topped the Patriots 43-12 on Lindbergh’s 2018 senior night, as senior football players, band members, Flyerettes and cheerleaders were honored for their four years of Friday night contributions.

St. Louis County school districts, including Mehlville and Lindbergh, are weighing whether to postpone fall sports to the spring as parents protest the county’s sports restrictions aimed at preventing COVID-19 among teenagers.

Paul Berry III, the Republican opponent in the November election of County Executive Sam Page, a Democrat, filed a lawsuit last week on behalf of Berry’s daughter, alleging, among other arguments, racial discrimination in Page’s public-health orders on youth sports since athletes of color often use athletic scholarships to get into college.

Surrounding counties such as Jefferson and St. Charles have started their fall sports seasons with few restrictions, but no games or competitions are allowed in St. Louis County for high-contact sports such as football, basketball, wrestling, ice hockey and water polo. Teams are still practicing, but if districts choose to try to hold a delayed fall sports season, there is no guarantee that they will be able to play a single game. A decision either way was supposed to be given to the state high school athletic association by Sept. 17, but Lindbergh and Mehlville both told The Call as of this week they are still considering possibilities.

Since Page first started issuing public-health mandates like the stay-at-home order that spanned from March to May, some members of the County Council have sought to restrain his power to issue those mandates without permission of the council. At the Sept. 15 council meeting, 3rd District Councilman Tim Fitch, R-Fenton, and 7th District Councilman Mark Harder, R-Ballwin, introduced two bills that would limit the county to issuing public-health orders for 15 days before the council would have to agree to them. The council received a record 344 public comments for the videoconferenced meeting, many of them revolving around youth sports and pressing for passage of Fitch and Harder’s bills.

But the third Republican on the 4-3 Democratic majority council, 6th District Councilman Ernie Trakas, R-Oakville, entered a firestorm of talk-radio criticism from his own party when he voted against the bills. Even the state GOP chair, former Rep. Jean Evans, joined some state Democratic lawmakers in denouncing Trakas. One of the four Democrats on the council, 1st District Councilwoman Rita Days, D-Bel Nor, voted for the bill, which means it would have passed if it had one more vote.

Fitch said that Trakas promised his support for both bills over the weekend. When County Counselor Beth Orwick dropped a last-minute six-page legal opinion that the bills could open the county to lawsuits, Trakas voted against the bills — a move his fellow Republicans said showed that he is in league with Page, who has been his ally on various issues in the past. In March Page’s administration settled a sexual harassment complaint filed against Trakas by his former legislative assistant, Annette Read, for $60,000.

But Trakas, an attorney, said he only granted his support to Fitch and Harder barring any legal issues because he had his own suspicions that there were legal issues with the bills, ultimately confirmed by the county counselor.

First, one of the bills is a rewritten sub-bill of a previous bill to place an amendment to the county Charter limiting the county executive’s power during pandemics. Although that bill never came to a vote, Fitch and Harder chose to amend it with the new legislation rather than start over. But county law requires that a sub-bill be substantially similar to the original bill, and Orwick believed this was not.

If the bill had passed, it would not have restricted Page because “he could ignore it with impunity because it’s unenforceable,” Trakas said. “It was an agenda to push this thing through regardless, and I just found that reckless and disingenuous to what the people of St. Louis County want, which is to limit the scope of the county executive.”

Trakas, who has spoken against Page’s stay-at-home orders to The Call since the spring, said, “There’s nobody, including Tim Fitch, who is more interested in reigning in Sam Page’s abuses of executive authority than me. The difference between Tim Fitch and I is that I want to make sure it’s A. legal and B. enforceable, otherwise it’s a waste of time. This idea that I’ve protected him (Page) has no substance whatsoever.”