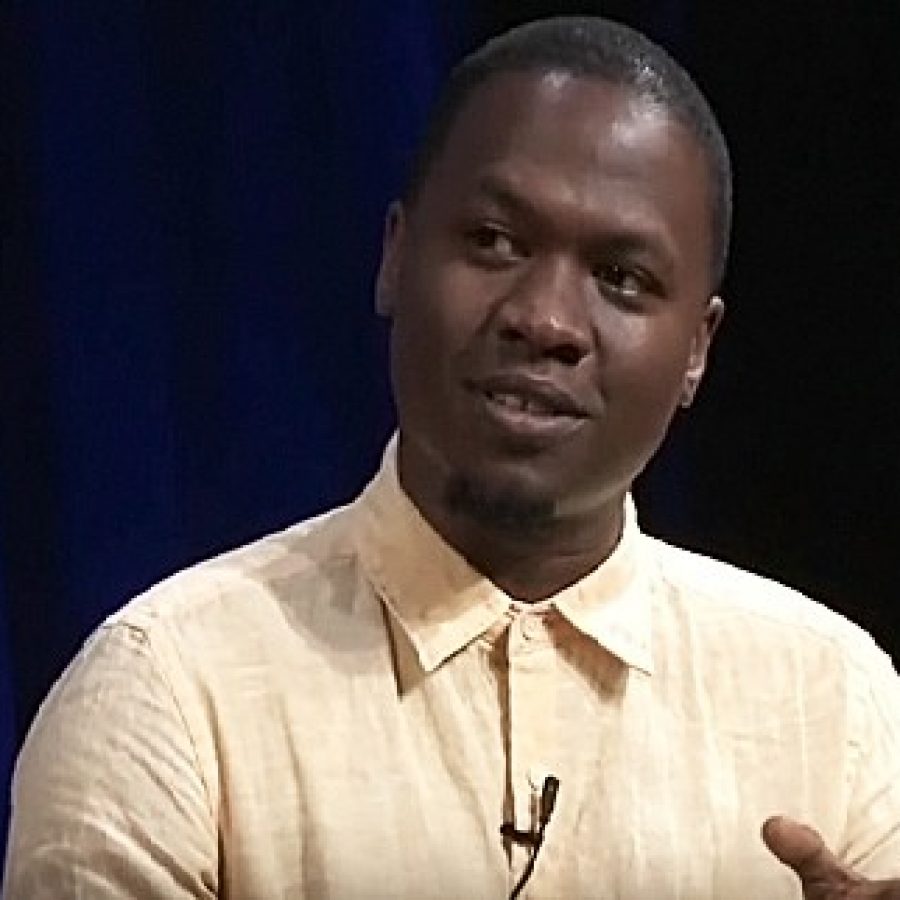 Disgraced former reporter and Mehlville High School graduate Juan Thompson is shown in this screenshot from BRIC TV on YouTube.

Juan Thompson, a member of the class of 2004 at Mehlville High, made at least eight bomb threats as part of a harassment campaign against an ex-girlfriend, according to an indictment that was unsealed Friday.

The investigation into the threats was conducted by the FBI, with the cooperation of the U.S. Attorney for the Southern District of New York, Preet Bharara, and the New York Police Department, or NYPD.

“Today, we have charged Juan Thompson with allegedly stalking a former romantic interest by, among other things, making bomb threats in her name to Jewish community centers and to the Anti-Defamation League,” Bharara said in a joint statement announcing the charges. “Threats of violence targeting people and places based on religion or race — whatever the motivation –— are unacceptable, un-American and criminal.”

Arrested by the FBI in St. Louis Friday, Thompson made his first appearance in federal court later in the day, where a judge delayed appointing him an attorney. He will be transferred to New York for the court case.

Thompson, now 31, was active at Mehlville as a member of the Student Council and the school band, according to Mehlville Director of Communications and Public Relations John Wolff.

Thompson was the oldest of 10 children and grew up in poverty on the northwest side of the city in the Wells-Goodfellow neighborhood, according to his writings. But Wolff could not confirm whether Thompson attended Mehlville through the Voluntary Interdistrict Choice Corp., or VICC, voluntary transfer program.

After what Thompson said were “five gap years” after high school, he went on to attend but not graduate from Vassar College in Poughkeepsie, N.Y. He was hired as a reporter by online magazine The Intercept for what seemed to be a promising career in journalism, but he was fired last year for fabricating quotes and stories.

The indictment came out of a monthslong FBI investigation looking into a series of threats against Jewish community centers and schools nationwide. Thompson is accused of eight of those threats, but the investigation into the others is ongoing.

Thompson made some of the threats in the ex-girlfriend’s name, and others in his name that he said the ex-girlfriend had made to frame him, FBI Special Agent Christopher Wells alleged in the indictment.

Thompson’s ex-girlfriend, who lives in New York City, is referred to as “Victim-1” in the indictment. The alleged threats against Jewish centers were “part of a sustained campaign to harass and intimidate Victim-1” after the couple broke up in July, Wells wrote.

The ex-girlfriend took out a restraining order in New York against Thompson in August and renewed it in October and December.

After the woman broke up with Thompson, he sent “defamatory” faxes and emails to her employer, a New York social-service organization that targets the spread of sexually transmitted diseases, or STDs, alleging she had been pulled over for drunk driving and had spread an STD herself, according to the indictment.

Thompson allegedly identified himself as the perpetrator in some of the emailed bomb threats, according to the FBI, including a Jan. 28 email to the Jewish History Museum in Manhattan, where the person making the threat wrote, “Juan Thompson put 2 bombs in the History Museum set to go off Sunday,” along with Thompson’s birthdate.

On Feb. 1, the same account was used to email a threat to a Jewish school in Farmington, Mich., that “Juan Thompson put two bombs in your school last night. He is eager for Jewish newtown (sic).”

Thompson frequently posted to Twitter, including tweets empathizing with Jews targeted by recent cemetery vandalism incident in Philadelphia. He tweeted that white people were “vile ilk.”

On Feb. 24, Thompson tweeted, “Know any good lawyers? Need to stop this nasty/racist #whitegirl I dated who sent a bomb threat in my name & wants me to be raped in jail.”

He earlier tweeted to the Secret Service that he would testify against his ex-girlfriend in the case.

In another tweet, he wrote, “The @SecretService visited me looked at my tweets, questioned my politics b/c some awful white woman I date reported me. I won’t be silenced.”

The indictment alleges that Thompson emailed the Anti-Defamation League, the Council on Islamic-American Relations and the Jewish Community Center in San Diego, Calif., to say his ex-girlfriend had made the threats against community centers.

“Ask her acquaintances she hates jews,” the emailer wrote to the San Diego JCC.

The next day, a threat was called into the ADL’s Manhattan office, saying a bomb would go off “within one hour.” The call was made with a voice disguiser and from an untraceable phone number.

Besides the bomb threats, the indictment also details other bizarre behavior that led to a charge of cyberstalking against Thompson.

In the first several weeks after the July breakup, the woman received text messages from someone claiming to be a relative of Thompson’s stating that Thompson had been hacked and did not send the emails to the woman’s employer. The emails also claimed that he was dying after being shot in a robbery — a claim the FBI found to be false, Wells said.

In September, an anonymous email sent to the woman contained nude photographs of her and threatened to publicly release them. Her employer and a board member of the organization separately received emails and faxes stating that she had threatened to kill Thompson, had an STD or was anti-Semitic.

In October, an anonymous emailer sent a tip to the National Center for Missing and Exploited Children that the woman had confessed at a club to watching child pornography.

The tip was traced to an IP address of a St. Louis house where Thompson lived, but he told the NYPD that his email account had been hacked and he knew that his ex-girlfriend did not possess child pornography. The NYPD detective who called to talk to him at the time warned him not to contact the woman again.

After Thompson was fired from The Intercept last year, The Riverfront Times published a cover story with pictures of him in the Mehlville High School yearbook. The reporter who wrote the article, Doyle Murphy, said Friday that he had also been the target of a harassment campaign from Thompson that echoed the tactics allegedly used against the ex-girlfriend, including emails sent to Murphy’s boss accusing the RFT reporter of rape.

Murphy talked to Thompson’s stepfather Friday, who told him, “When he came back from New York, he wasn’t right. He wasn’t that way when he left.”

During Thompson’s time at The Intercept from November 2014 to when he was fired in February 2016, he reported on post-Ferguson policing issues in St. Louis and appeared to scoop other reporters by landing an interview with a cousin of Dylann Roof, who in July 2015 murdered nine people in a church in Charleston, S.C.

But Roof’s cousin “Scott” did not exist, and Thompson had routinely fabricated people and quotes in a “pattern of deception,” Intercept Editor Betsy Road wrote in an editor’s note posted after he was fired.

In a statement issued Friday, The Intercept wrote, “We were horrified to learn this morning that Juan Thompson, a former employee of The Intercept, has been arrested in connection with bomb threats against the ADL and multiple Jewish community centers in addition to cyberstalking. These actions are heinous and should be fully investigated and prosecuted.”