Despite widespread interest, only one parent speaks on holding Mehlville classes in person

In-person groups of three can meet with teachers 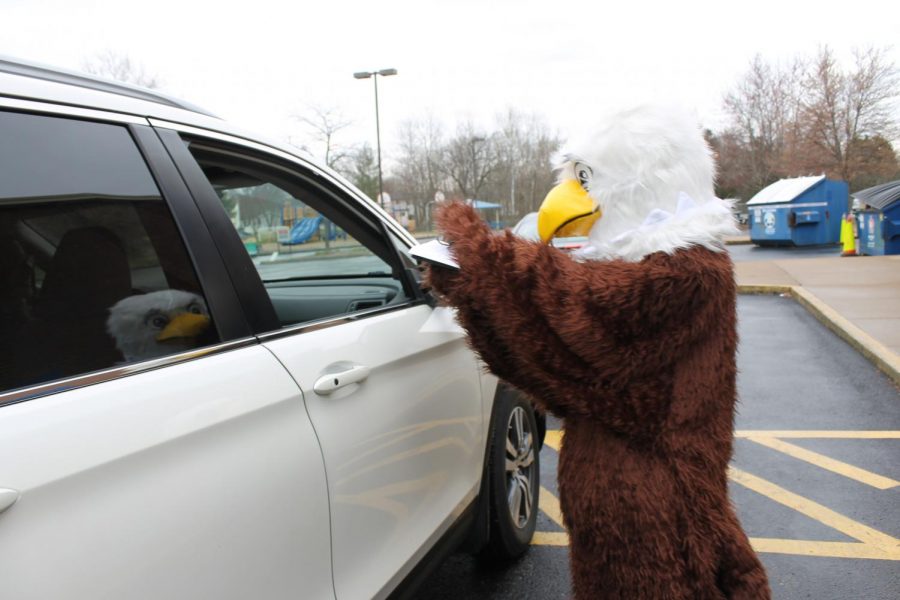 The Point Eagle mascot passes out Chromebooks at a drive-thru event in March 2020.

With all the discussion going on about whether schools should start in person or virtually this fall, only one parent came to the Mehlville Board of Education’s Aug. 5 meeting where the board decided to start the year all-virtual.

One district parent, Chrissy Kaiser, urged the board during public comments to keep in mind children like her son Dylan, who has autism, while they made the decision whether or not to go virtual.

“Dylan is just beginning his journey on becoming verbal. … Not attending school in person for kids like Dylan will set them back further than anyone can imagine,” said Kaiser. “Having a virtual semester won’t be beneficial at all for these kinds of kids. … Please keep these special kids in your minds and hearts when making this decision tonight.”

Like most St. Louis County districts, Special School District has also said it will start the year all-virtual due to the rising trend of coronavirus cases in the county. Nationwide, health officials have said school can safely happen in person only if there’s low community spread of COVID-19.

With cases rising in the community, the Mehlville board voted unanimously 7-0 to start the school year online.

The average number of new coronavirus cases diagnosed among St. Louis County residents increased by 102 percent between the start of July and mid-July, according to data from the county. Oakville was singled out as a hotspot last week by Dr. Alex Garza, the head of the St. Louis Metropolitan Pandemic Task Force comprised of the four major hospital systems in the region.

As a way to address some of the concerns surrounding virtual learning, the recommendation the district administration made for 100-percent virtual learning would also allow for in-person appointments with teachers on as needed-basis in groups no larger than three.

“If we do start virtually, there needs to be a concentrated effort to figure out ways to make it work for kids in school, whether that’s Plexiglas barriers between everybody, lots of personal protective equipment … We (society) wasted that first initial shutdown … We should have been … making personal protective equipment and looking at how to keep kids safe in school,” said board member Lisa Messmer, who is a nurse at Nazareth Senior Living Center, which reported more than 70 coronavirus cases in an outbreak in April and May. “This is a big problem. There’s no easy solution. We have this virus, no matter what we decide, there’s going to be people that are upset, there’s going to be people that are happy. … I keep hearing ‘It’s unfair, it’s unfair’ — but it’s a virus.”

Comments on the district’s Facebook post announcing the decision to start with the Plan C model received mixed feedback. Some parents said that it should be up to them to choose whether or not to send their children to school and not up to the district, while other comments thanked the district for keeping student and staff safety in mind.

“The community is going to be upset about one thing or another. One other thing I thought of —  and this is going to sound harsh but it’s sort of true — would we rather face an angry mob because the death of a child or a staff member, or would we rather face an angry mob because we chose to hold off on instant gratification and starting school?” questioned board Vice President Peggy Hassler during the special meeting. “If you really want to drill it down, that’s what could be on the line here: someone’s life.”

“Or more, depending on the circumstances,” added Jeff Wolman, who was just elected to the board in June.

For families who may not have the necessary technology for virtual learning, the school district already has 1:1 laptops for its students and can also provide hotspots for households that may not have reliable access to the internet.

In addition to approving the recommendation to begin the academic year in a virtual model, the school board also unanimously approved a “Connected” 2020-2021 academic calendar and a “Blended” 2020-2021 academic calendar. While the first day of school remains the same, Tuesday, Aug. 25, the approved amended calendars make changes to the half-days for professional development and adding parent-teacher conferences. The district released more information the next day, such as what a virtual school day schedule would look like depending on grade level as well as information for students and families on grading, time commitment and technology.