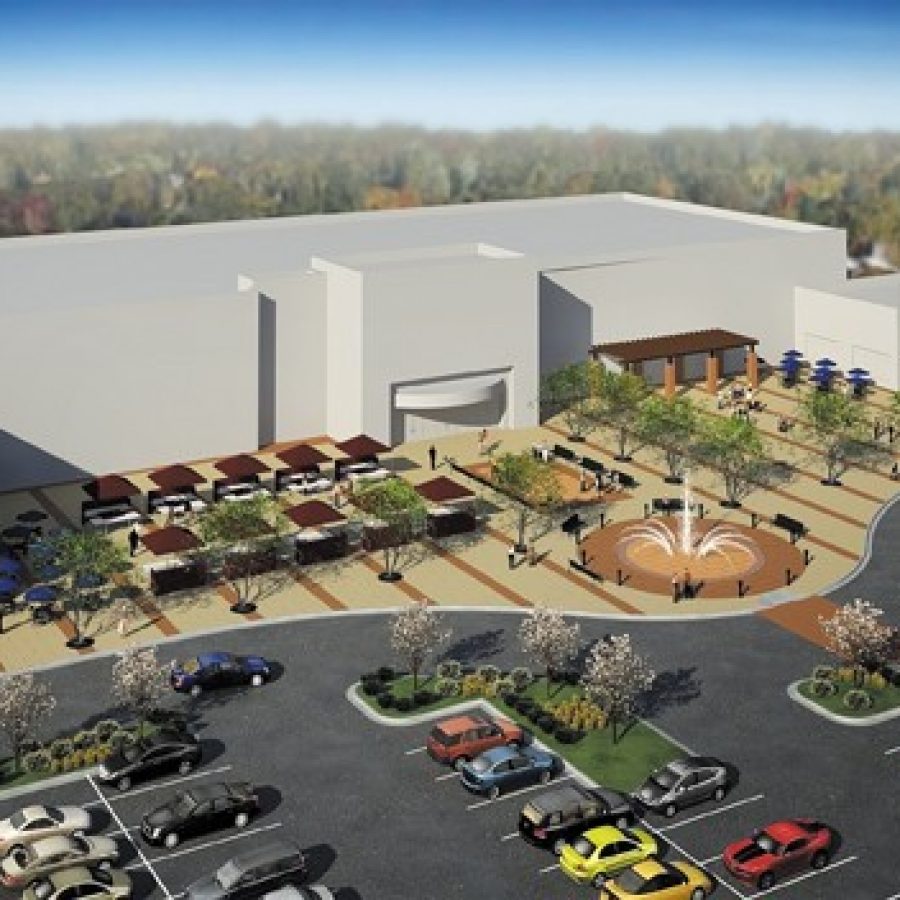 This rendering depicts a community plaza that would anchor the center of the entertainment and destination service retail area proposed by UrbanStreet Group for the former Crestwood Plaza site.

The owner of the former Crestwood Plaza is requesting nearly $28 million in tax incentives for a roughly $99.5 million mixed-use redevelopment of the former mall site.

As proposed, the redevelopment of the former mall property would include four components — a retail area, a multiplex theater and restaurants, apartments, and open space and community gardens.

Crestwood officials last week released the mall owner’s response to the city’s request for proposals, or RFP, to redevelop the 47-acre property at Watson and Sappington roads, after keeping the proposal under wraps for nearly a month.

• A service retail site on three acres on the far west of the property.

“We have analyzed and engineered multiple scenarios for this site including multi-tenant inline retail, individual out lots and single use midsize box retail,” the proposal states.

“Potential users include a full-line grocer, a specialty grocer, a fuel station, a convenience mart, a pharmacy and a drive-through fast food. The developer is in discussions with representatives from all of those user categories.”

• An entertainment and destination service retail use section on 20 acres in the middle of the property that would include a multiplex theater and various destination restaurants.

“… This portion of the project is anchored by a plaza that could be privately and publicly programmed to accommodate a wide variety of community events ranging from farmers’ markets to concerts,” the proposal states. “This plaza affords outdoor seating areas for the restaurants as well as a gateway entrance to the theater. This ‘town square’ will provide a flexible hub for civic life not only within the project but for the community as a whole.

“Other complementary uses for this area of the project include office, fitness, entertainment complexes and destination dining. The developer is in negotiations with a regional theater chain to anchor this portion of the project and has had discussions with representatives of all user categories.”

• A multifamily residential site on 11 acres occupying the southeast part of the property.

“Preliminary plans call for a 225-unit ‘lifestyle’ apartment complex with associated garage and surface parking as well as an amenity center. Due to the extreme topographical changes in the overall site, this portion of the project will sit lower than the surrounding parcels, providing a certain protective isolationism to the residences,” the proposal states. “These rental units are of an extremely high level of finish and cater to a ‘renter by choice’ class of tenant. This demographic is seeking flexibility in their lifestyle and prefers to pay rent rather than be tied to the burdens of residential ownership.

“As a group, they are demanding and the project will not only need to be built to the highest standards, but more importantly, it will need to be maintained at those standards long term. This new breed of apartment complex boasts amenities mostly associated with resort or hospitality projects.”

• An open space and community garden component adjacent to the multifamily area.

“The massive reworking of the site and the associated stormwater management will result in approximately 13 acres of multiple open detention and treatment areas,” the proposal states. “These areas will be landscaped with native plant materials and will provide a natural oasis. It is also the developer’s intent to redevelop the parcels adjacent to the industrial park into public garden plots accessible to the community. This will provide a much-needed strip of green space in the industrial park as well as potential connectivity to the Great Rivers Greenway path.”

As proposed, the roughly $99.5 million budget for the project is:

“The method of financing will be a combination of private equity, debt financing and the financial incentives that are available,” the proposal states. “The developer is requesting $27,863,058 through a combination of tax-increment financing — TIF — transportation development district — TDD — and community improvement district — CID — funds,” the proposal states. “This represents 28 percent of the total estimated project costs. It should be noted that the developer’s redevelopment plan includes not only the redevelopment of the four RPAs as described herein, but it also includes a substantial redevelopment of the municipal infrastructure that will benefit the entire Crestwood Plaza Redevelopment Area.

“These areawide projects would be (1) the demolition of all remaining improvements on the site and (2) the design and construction of a stormwater detention system to meet the requirements set by the Metropolitan St. Louis Sewer District.”

UrbanStreet Group purchased the mall property last year for $2.625 million from Chicago-based Centrum Partners and New York-based Angelo, Gordon & Co., which owned the majority stake in the site. While the structures on the site were valued at just $1,000 by St. Louis County Assessor Jake Zimmerman last year, the property was valued at $9,849,000.

“Based upon the estimated project costs of nearly $100 million, and in order to provide a reasonable return to the developer so that the project can even begin, the developer believes that TIF incentives are necessary,” UrbanStreet’s proposal states. “The developer also anticipates that a certain amount of the TIF can be repaid from proceeds derived from a CID and possibly an additional amount will be repaid from proceeds from a TDD. The CID would levy a sales tax of up to 1 cent per dollar, and the TDD would likewise levy a sales tax of up to 1 cent per dollar. If all the proceeds from the CID are not required for assistance for the TIF, the remaining proceeds will be used for other legally authorized uses of CID funds, including area security and beautification.”

The developer does not anticipate the need to acquire any property by eminent domain, the proposal states.

In 2008, Centrum and Angelo, Gordon bought the mall for $17.5 million from the Westfield Group and renamed it Crestwood Court. Westfield bought the mall in 1998 from Hycel Properties for $106.4 million. Hycel Properties had operated Crestwood Plaza since 1957, first as an open-air mall. A mid-1980s redevelopment transformed the mall into a fully enclosed shopping center with more than 1 million square feet of retail space.