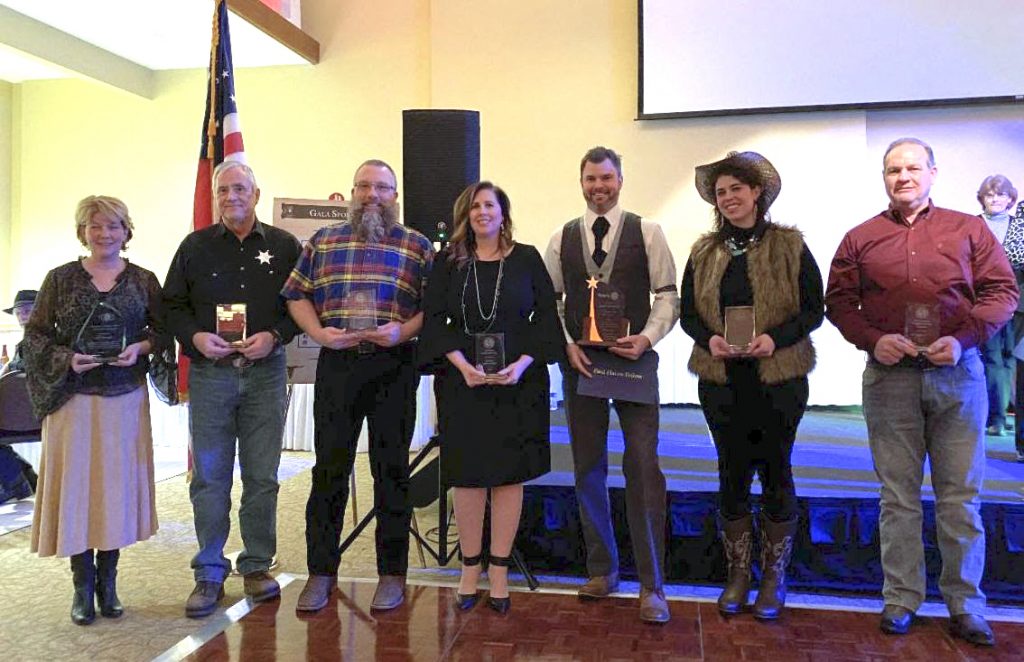 The banquet honored 2019 chamber award recipients, including citizen of the year and business of the year.

Lori Kruger was one of the organizers of the first event and has continued to be an ardent supporter to this day. As president of the “Sunday Night Lights” executive board, Krueger leads a team of volunteers who plan a night under the stadium lights on the Lindbergh High School football field.

Young heroes are paired with LHS buddies on the football team, march band, cheer squad and dance team. They eat a meal together, play games in the pregame carnival and participate in a real football game experience as they are cheered on by a full stadium of fans and supporters.

Krueger’s volunteer team organizes Lindbergh students, teachers and families in support of children from across the St. Louis region. Community groups and organizations also participate, creating games for the children, donating food for the participants’ meal and providing entertainment.

All of this would not be possible without the leadership from Krueger and her army of volunteers.

In addition to her work with “Sunday Night Lights,” Krueger has also served as president of the Kennerly Elementary School Parent Teacher Partnership, organized the fifth-grade camp fundraiser, developed and chaired the Kennerly School Variety Show from 2001 to 2007 and was honored as a Lindbergh Leaders award recipient.

Krueger’s list of community achievements is impressive, but it’s her dedication and selfless devotion to the children of Lindbergh Schools that distinguishes her as one of its finest leaders. Krueger has a gift of working with children, staff members and other volunteers. She leads by example and creates an environment where everyone working with her takes pride in being involved.

Adam Schmitz has his roots in St. Louis, growing up in Ballwin and attending Parkway South High School. He truly has a love for this city and enjoys that most of his family lives in the area.

Schmitz earned a bachelor’s degree in architecture from Drury Univesity and spent several years working in the industry after graduation.

In 2011, after experiencing the difficulties of the recession, Schmitz switched industries and began working for Terra Nova Construction as a designer and project manager.

Outside of work, most of Schmitz’s time is spent being a proud father of two children, Jaden and Elsie, and husband to Ashley. As a family they enjoy exploring St. Louis, especially their current hometown of Kirkwood. On occasion, Schmitz can be found playing ice hockey or hitting up the golf course.

Giving back to the community is as important to Adam as having a successful career. He is an active member of the Crestwood-Sunset Hills Rotary Club and a volunteer at Journey Church – West County. He is the committee chairperson of the “Feed the Knowledge” program at his Rotary Club, which provides weekend meals to children in need at local school districts. At Terra Nova, he is proud to support charities like “Mission St. Louis” and the “Jason Motte Foundation,” as well as partnering with Habitat for Humanity to donate usable goods from their remodeling work.

April Gamache was born in St. Louis and raised in Arnold. She began working for America’s Incredible Pizza Company seven years ago, starting as a cashier and working her way up the company ladder. She was the party manager for five years, assistant director of customer service for one year and was then promoted to her current position of director of group experience.

Her primary focus is bringing large groups together where family and friends can leave their worries at the door and come together for great food and fun.

Gamache has a passion for customer service. She feels that it is key when a customer walks away thinking “Wow, I love doing business with them and I want to tell others about the great experience.”

She finds it rewarding when a child comes up to her and says they are having so much fun.

Gamache became active in the Crestwood-Sunset Hills Area Chamber of Commerce when she assumed her role as director of group experience. She immediately jumped into chamber activities by attending all the luncheons and participating in all events she could. She said she made many great friends and loves to meet people through networking. She is looking forward to another successful year in 2020.

Gamache and her husband have three children ages 2, 4 and 12. They recently moved to Imperial. In her spare time, Gamache enjoys turning old furniture into something new and beautiful.

A.J. Borzillo tore down the existing structure of the previous location of Gianino’s Restaurant at 3735 S. Lindbergh Blvd. and turned the property into a beautiful new building housing two new businesses in the Sunset Hills area.

A.J. Borzill0 was founded by Al and Nancy Borzillo in 1964 and has been building custom homes for 55 years. Residential construction makes up about 80 percent of their business.

They are very flexible in the type of home they build, developing and building homes in small subdivisions as well as large custom homes throughout the St. Louis area.

Mike Borzillo became president of A.J. Borzillo 23 years ago. As a child, Mike Borzillo remembers visiting construction sites with his father as early as 4 years old. By the time he was 16, Mike Borzillo was working in the family business. He became a laborer during high school and worked in the company business as a carpenter for 18 years.

Even though he was born in Rochester, New York, Charles Lucier is a St. Louis boy at heart as his family moved to St. Louis when he was young boy.

Lucier began his career in the telephone industry by working during summers between the school year. After he received his undergraduate degree, he went to work full time for the telephone company, where he survived two mergers/acquisitions.

With the first merger/acquisition, he moved to Dallas, Texas. After the second merger/acquisition he was offered a voluntary separation package. He took this opportunity to return to St. Louis where he embarked on his new career in the blood banking industry with Mississippi Valley Regional Blood Center 15 years ago.

He is also active in the community as a member of Crestwood’s Emergency Response Team and coordinates blood drives for his church on a volunteer basis.

Lucier has been married to his high-school sweetheart, Margaret, for 42 years and together they have five children and six grandchildren.

Scott Credit Union was founded in 1943 by a group of visionaries from Scott Field who decided to create a local credit union where the average person could save and borrow money.

Their ties to Scott Air Force Base and members of the military remain strong. They continue to operate as the only credit union on base, and serving members in the military is still a focus of their business.

Scott Credit Union is a full-service financial cooperative, working hard to provide its members with the financial services they need.

Scott Credit Union has given $12 million back to its members through bonus dividends and loan interest rebate programs.

Scott Credit Union has made giving back to its communities a major priority. It has contributed about $3 million and its employees have volunteered more than 21,800 hours to a variety of local civic efforts and financial education throughout the past 10 years.

Abercrombie started her volunteer life when her daughter entered kindergarten at Truman Middle School, which at that time was an elementary school. She still worked full time as a medical device sales representative but found time to help whenever she could.

The following year Concord Elementary opened and her daughter transferred there. Abercrombie agreed to help chair the new holiday program, Helping Hands, which included their version of a Giving Tree, serving Concord families in need.

At about the same time, she made the decision to leave her career to spend more time with her family.

Over the next few years, she ended up going back to full-time hours at various positions, but still found time to volunteer on projects wherever and whenever she could.

Projects included social coordinator of the Parent-Teacher Group Board at Concord Elementary and progressing to president of that organization. She co-chaired the Proposition G campaign and chaired the Proposition R campaign last year. She helped fundraise for victims of severe flooding in the area and was a named a Lindbergh Leader in 2015.

In 2017, Abercrombie created Lindbergh Night at the Missouri Botanical Garden Glow. She has led fundraising efforts for Truman Middle School and Sperreng Middle School and was a founding member of Lindbergh Lights the Way, a program whose mission is to engage Lindbergh students in activities outside the classroom.

In 2019 Abercrombie established Jen’s Happy Plate Project in recognition of her years of service to Concord Elementary and the Helping Hands Program.

She currently serves on the board of Lindbergh High School’s PTG. She said the best part of all the volunteering she does is that it gives her the opportunity to meet and work with wonderful, creative and dedicated people all over the entire Lindbergh Schools district. She is grateful for the friendships she has made and is blessed with a family that supports her in all she does.

Abercrombie lives in Sunset Hills with her husband, Chris, a physician with Mercy, her daughter who attends LHS, her son who attends Sperreng Middle and their sweet golden retriever named Holly Paws.