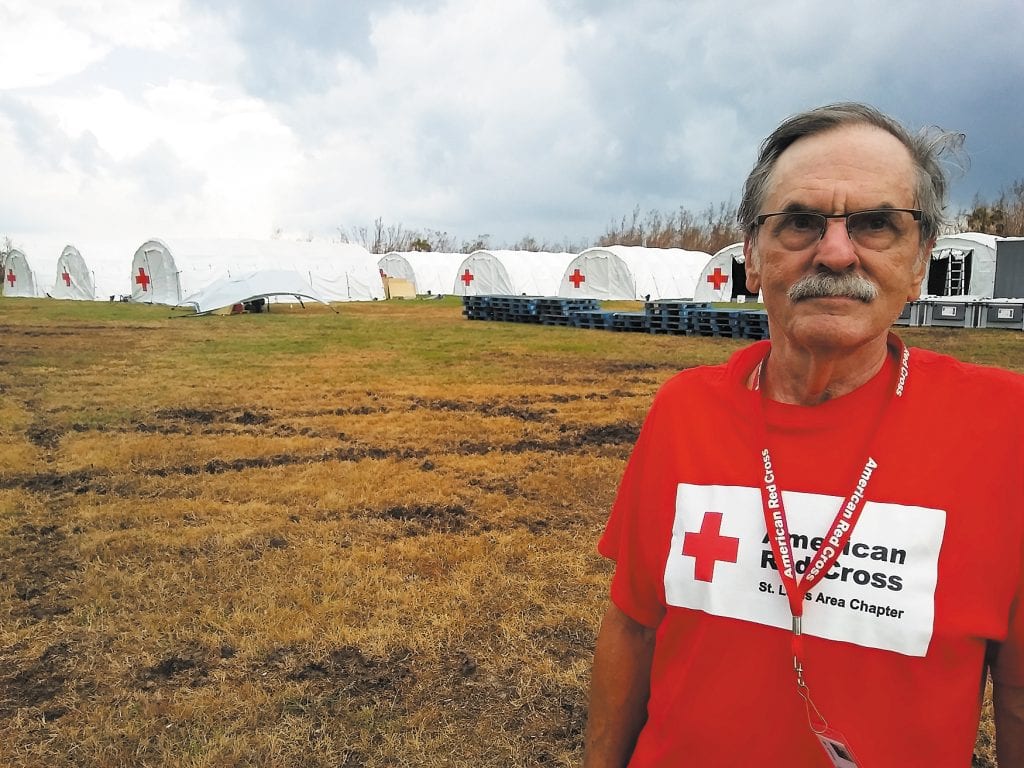 Crestwood resident Jim Bubash traveled to Florida to help victims of Hurricane Irma there. He is pictured in front of a number of white Red Cross tents. He said he found volunteering to be a very rewarding experience.

Crestwood resident Jim Bubash recently returned home after spending two weeks in Florida assisting victims of Hurricane Irma as a Red Cross volunteer.
“Surely you have seen images on the media that show the physical destruction, but there is no way to describe the emotional trauma experienced by those that have lost everything — their home, possessions, pets and more,” he told the Call.
Bubash praised the efforts of the Red Cross in the recovery effort.
“The Red Cross is doing a fantastic job in the recovery,” he said. “Responding to this disaster, the Red Cross has provided over half a million overnight safe places to stay and served 944,000 meals and snacks. The criticism of the Red Cross you see on the media is untrue and totally without merit.”
Asked how he became motivated to volunteer, Bubash recalled sitting comfortably on his couch surfing through TV channels for something meaningful to watch when he saw the destruction Hurricane Irma was causing in Puerto Rico.
When a commercial came on, he flipped the channel and watched how the American Red Cross was seeking volunteers to help Hurricane Irma victims. It all came together “for some reason,” and the following day he filled out an online application to volunteer.
“They called back the next day and scheduled a class the day after Labor Day. (I) attended two more classes, and before I had a chance to take a breath, boarded a flight for Florida on Sept. 13,” he recalled. “In Florida, I was assigned to what is called a Jump Team. That is a group of volunteers that gets assigned to wherever the need is the greatest.”
The Crestwood resident volunteered at two different shelters helping people displaced by the hurricane. Bubash also spent time constructing a facility to house Red Cross volunteers and staff and helped bring food and supplies directly to people displaced by the storm.
Volunteering was a very rewarding experience, he said.
“The long hours and stress are more than compensated by the gratitude received by those we serve,” Bubash said. “I am most thankful for my wife, Patricia, for her continual support, encouragement and giving me this opportunity to serve.”