Crestwood quarry project moves ahead with a pedestrian bridge 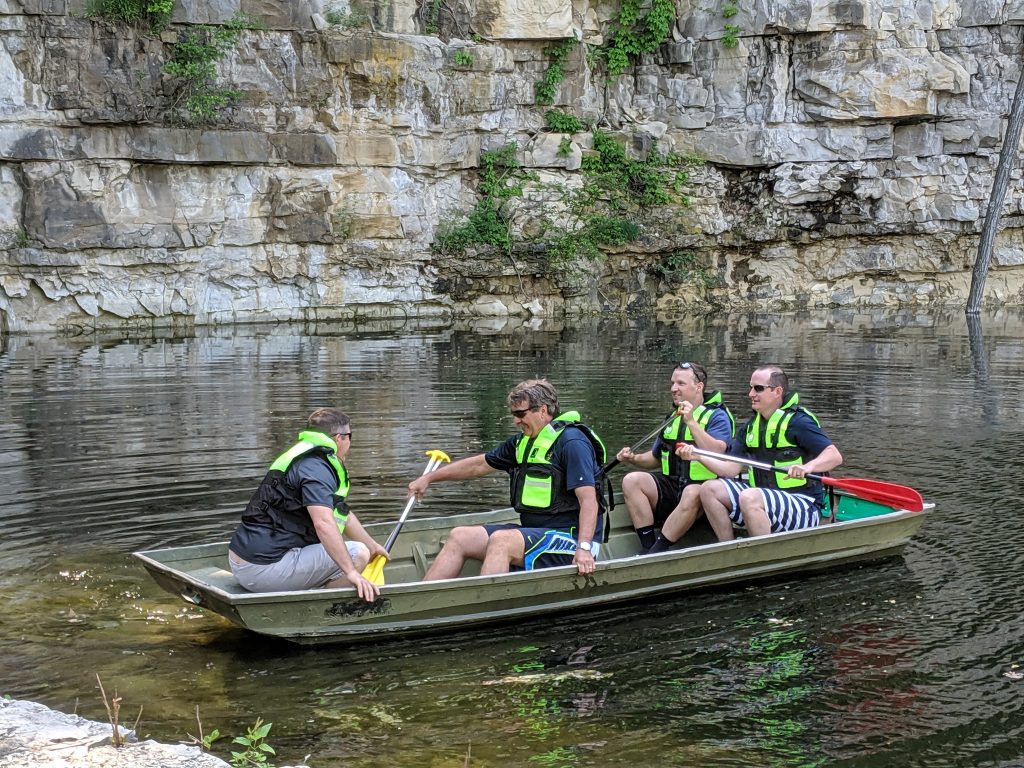 The Crestwood Fire Department conducts water rescue training at Whitecliff Quarry in May 2019.

Construction on the next phase of the redevelopment of the Whitecliff Park quarry is underway in Crestwood.

A new boardwalk, pavilion, fishing plaza, lighting, gravel trail and Americans with Disabilities Act-compliant parking are being built at the quarry and are expected to be completed by winter this year.

In March, the Board of Aldermen unanimously approved an ordinance to contract with FGM Architects Inc. for consultant services on the next phase of the Whitecliff Quarry Enhancement Project.

The ordinance approved by aldermen only covers designing quarry enhancements such as a pavilion with electricity.

But on the recommendation of City Administrator Kris Simpson, the board also directed FGM Architects to look into designing a pedestrian bridge over Mulberry Creek to connect the quarry area with Ward 1 and nearby neighborhoods, as well as the addition of a restroom facility at the lower end of the quarry.

The quarry was opened for public access a little over two years ago, but the Whitecliff Park Comprehensive Plan which was put together over 20 years ago envisions an eventual pedestrian bridge, boardwalk and other amenities.

“With having this new quarry boardwalk area .. the thought is, with all of the events and activities that we’re planning on hosting down there … some restrooms are needed, and while these architects are being retained to design this whole area, having them do the design of the bridge and restrooms down there would be appropriate,” said Mayor Grant Mabie.

Both Phase 1 and Phase 2 of the quarry improvements have been partially funded through grants, both federal and from St. Louis County.

Phase 1 of the project includes the boardwalk, fishing area and handicapped-accessible parking. Funding for the Phase 1 improvements was partially obtained through a federal Land Water Conservation Grant the city applied for in 2019. The LWCF grant provided up to $125,000 for the first phase improvements, which cost just over $265,000 in total.

At that time, Mabie said that grant was a “significant opportunity to bring more people to one of Whitecliff’s hidden gems.”

The city used online surveys from 471 respondents to determine the Phase 1 projects.

In 2020, the city was awarded a St. Louis County Municipal Park Grant to complete Phase 2 of the project. Through the grant, the city is eligible for reimbursement of up to $279,697. The total costs for the Phase 2 improvements are estimated at $309,872. With the application of the grant money, the city’s financial contribution would be $33,175, along with an in-kind contribution of $34,200 for labor, equipment and materials.

At a board meeting earlier this month, aldermen approved an amended ordinance to the contract with FGM, expanding the scope  to include the design services for the restrooms and lower pavilion area. The amended agreement also calls for FGM to provide architectural services for window replacement at the Government Center, which is still under renovation.

With the amendments, the total cost for services from FGM is $128,595. The ordinance was unanimously approved as part of the consent agenda with no discussion.