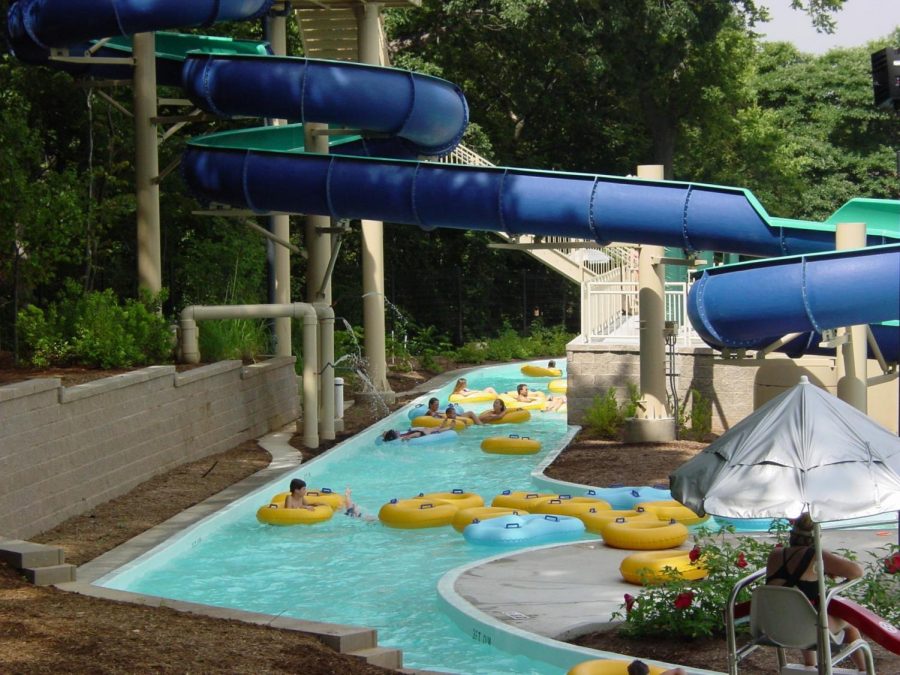 The pool at the Crestwood Aquatic Center's lazy river and slide, as seen in a photo from Westport Pools.

The Crestwood Aquatic Center will be open beginning Monday, June 15, but the pool will operate under COVID-19 restrictions on capacity and requirements for social distancing that will make this year’s pool season far different than ones from the past.

The city said it has taken time to “thoroughly” review the St. Louis County official guidelines for reopening public water recreation facilities and is cooperating with every regulation from the county. The coronavirus operation plan is listed here.

The plan includes requiring reservations for either a morning or afternoon session, requiring masks when not in the water and no deck chairs out because they wouldn’t be able to be sanitized enough— but attendees can bring their own lawn chair. The pool and surrounding area will be disinfected between the two shifts. Guests will be screened for COVID-19 before entering, and staff will have temperatures taken when they come to work. There will be no birthday parties or pool toys checked out from lifeguards. Anyone who refuses to wear a mask will be asked to leave. There will be no lost and found, and anything left behind will be thrown out at the end of the day.

“The nice thing is, one of the things I’ve always disliked about going to water parks is how crowded they can get, and even though I think demand will be high for the pool, because we’re going to have capacity limitations it’s not going to be terribly, terribly crowded,” City Administrator Kris Simpson said. “So I think it’ll be a very enjoyable experience for people who do come on out.”

To manage crowd size and maintain a safe environment, Crestwood will not allow any new nonresident memberships, with the exception of a possible collaboration with the city of Sunset Hills, which has decided not to open its pool for this year.

Considering the “fairly onerous rules” and weeks of uncertainty leading to the release of the county guidelines, roughly half the municipalities in the county with pools have chosen not to open them this year, said Crestwood Mayor Grant Mabie.

“It’s a big burden on the Crestwood staff, but I think they’re doing an admirable job under difficult circumstances trying to make the pool a good experience,” Mabie said.

Sunset Hills is among the cities that have chosen to close their pools for the summer, although the neighboring city may collaborate with Crestwood on a deal for Sunset Hills residents who still want to swim this summer. Crestwood was better positioned than Sunset Hills to be able to pivot and open with just a few weeks’ notice of the guidelines because it contracts with a pool management company, Midwest Pools, that already has hired and trained lifeguards for the summer and even cooperated with the county on developing the guidelines.

“Recognizing that a lot of other area pools have closed down, we do not want our pool to be overburdened with people from around the region so we’re restricting access to the pool to a certain extent,” Simpson said. “We’re trying to make sure that the immediate community that’s always supported us has the opportunity to enjoy the pool because we recognize that capacity could be an issue.”

Only current passholders, Crestwood residents, residents of Lindbergh Schools, and nonresidents with a preexisting pass can purchase memberships. Some nonresident members have been loyal patrons of the Crestwood pool for a decade and the city did not want to leave them out this year, Simpson said.

Membership sales began Friday, June 5. If you have a current membership and have not yet worked with a staff member to transfer your information into the new software system, the city noted that additional time will be needed to get this completed.

For residents who want to come to the socially distanced pool, the city has made improvements in the offseason through a St. Louis County Municipal Parks Grant. The $400,000 in improvements included maintenance and a new kiddie splash pad that Simpson said should make the Crestwood kiddie pool one of the best in the area. The only improvement that didn’t make it in time were new audio speakers, which were delayed due to COVID-19.

“With the number of slides and features that we have, we’re hoping that people will be able to enjoy that as well. We’re excited about everything that we’ve gotten done,” Simpson said. “I know there were some people excited about it, but I know there’s some people who are not going to go and I understand that.”

The shifts will also help more people enjoy the pool in a single day, the city administrator said.

“We’re anticipating that demand is going to be high,” he said.

If that isn’t the case and demand is low, the city will re-evaluate its plan.

Sunset Hills could collaborate with Crestwood

If Sunset Hills would open its pool this year, the city would lose “huge amounts of money” at a time when budgets will have to tighten anyway due to COVID-19, Sunset Hills Mayor Pat Fribis said. She said that aldermen made the decision after talking with City Administrator Eric Sterman.

“Safety and the general welfare of our residents is No. 1 in our city and we have to be fiscally responsible,” Fribis posted on Facebook.

But Crestwood officials said they are happy to open up their pool to Sunset Hills and the rest of the Lindbergh community.

Mabie said collaborating on the pool would just be the latest in a series of collaborations between the cities, including the festival SunCrest Fest, the Kitun dog park, municipal parks grants and the joint Crestwood-Sunset Hills Area Chamber of Commerce.

“The details are being worked out, but we’re seeing if that’s something we can collaborate on so the (Sunset Hills) residents can enjoy a pool this summer,” Mabie said.