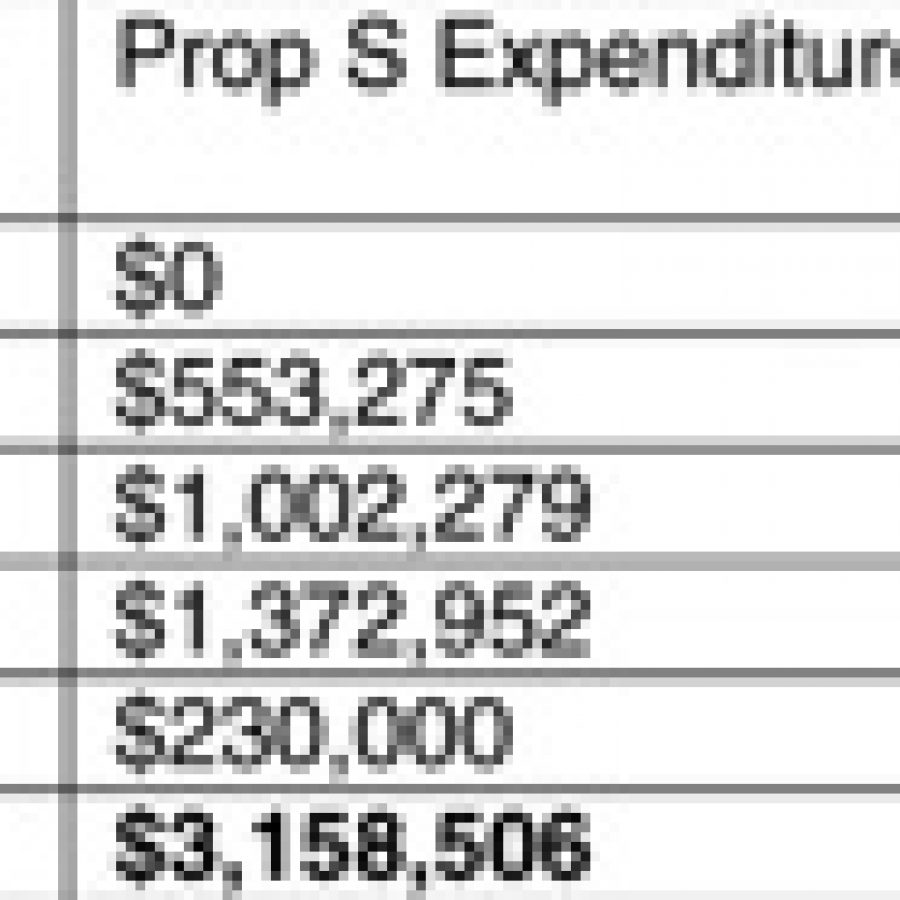 This table prepared by City Administrator Jim Eckrich for Mayor Roy Robinson and the Board of Aldermen shows that by the end of 2010 the city of Crestwood will have spent \$704,219 in general-fund monies above those revenues provided by Proposition S.

The Crestwood Board of Aldermen must decide by next year whether to honor a March 2006 board-approved resolution or forfeit hundreds of thousands of dollars.

This situation will arise as a result of a financing agreement that the city reached in October 2006 with Royal Banks of Missouri.

At that time, aldermen approved what was termed an “annual-appropriation note” from which the city received $2.87 million to be paid back in seven years with revenue from the successful April 2006 tax-rate increase Proposition S.

Residents approved Prop S as a seven-year, 20-cent tax-rate increase promoted by city officials as a way to retire $2 million in debt and a $1.5 million line of credit from Southwest Bank at the time.

Aldermen since have rolled back that tax’s residential and personal-property rate to 16.9 cents while its commercial rate is still 20 cents per $100.

On March 28, 2006 — one week before the successful passage of Prop S — aldermen approved a resolution stating that Prop S “… is solely to retire our current debt to Southwest Bank and to eliminate the need for our current line of credit from that same bank.”

That evening, Mayor Roy Robinson vowed to ask aldermen to retire the Prop S tax if the city’s debts were paid off before the tax’s seven-year sunset expires in 2013. Robinson made that statement in response to a public comment from resident John Foote, who is now a Ward 4 alderman.

As written in the meeting’s approved minutes:

“… John Foote, 8865 Glen Rose Drive, read a statement stating that at a recent town-hall meeting a presentation given by members of Citizens for Prop S contained an incorrect statement. He stated that the presentation had indicated that the tax could end before the seven year sunset clause but that was incorrect.

“Mayor Robinson stated that if the city’s debts were paid off before the seven year sunset then he would ask the board to cancel the tax. The city attorney confirmed that the board could cancel the tax …”

But with that $2.87 million note slated to be retired by 2010 because of penalties levied against the city in violation of an Internal Revenue Service provision in the note, aldermen must decide whether to keep collecting the Prop S tax until it expires in 2013.

In late 2007, then-City Administrator Frank Myers learned that the note’s tax-exempt status would require the city to make penalty payments above money owed in the city’s agreement with Royal Banks. Myers and independent financial adviser Carl Ramey of Stifel, Nicolaus & Co. advised the board in October 2006 to approve the note with Royal Banks.

Because the note contains an IRS provision that limits the city’s available cash balance in its general fund to no more than 5 percent of the highest expenditure month during the previous calendar year, city officials were forced in 2008 to pay off debt in the amount of $1,002,279 — well above the $540,716 generated in 2008 by the Prop S tax.

With that IRS provision still intact on the tax-exempt note, City Administrator Jim Eckrich now believes that the city will be forced to make an unscheduled debt payment of $895,000 by April 10.

Between the unscheduled $895,000 payment and this year’s scheduled payments of principal and interest, the city will pay a combined $1,372,952 in 2009 toward Prop S debt.

While aldermen could convert the note to taxable status, which would eliminate the IRS provision, Eckrich wrote in a Jan. 16 memo to Robinson and the Board of Aldermen that he “does not know if there is sufficient time to convert the note to taxable, as staff did not pursue this matter based upon the deliberation of Proposition S as part of the 2009 budget and the 2008 vote regarding this matter.”

Aldermen then would be left with the decision of continuing to collect the Prop S tax each year until 2013 as allowed by its voter-approved ballot language or following through on the March 2006 board-approved resolution to retire Prop S once the debt is paid.

Eckrich has estimated that if the city did not collect the Prop S tax after 2010, the city could not recoup $704,219 in debt payments spent above Prop S revenues collected since 2006. To recover those funds lost by the general fund, Eckrich said Prop S would have to be collected until 2012.

With respect to the IRS-imposed 5-percent balance limit in the general fund, Eckrich said city officials were unaware in 2006 that penalties could be levied against the city requiring the debt to be paid off sooner. Myers, who resigned in March 2008 to take a position as Glendale city administrator, first presented that scenario in late 2007 to aldermen.

“I’m not sure that anyone at the time (in 2006) fully understood the cash-penalty clause,” Eckrich said. “… I can’t speak for Frank directly or the finance people that were here at the time, but I’m not sure that they understood the cash-accumulation limit in order to keep the note nontaxable. And I just don’t think the city would have anticipated — I don’t want to sound braggadocious here — but I don’t think the city would have anticipated reducing expenditures and accumulating the cash that we did.”

While Eckrich estimates that the city in 2008 spent “at our budgetary level” in the general fund, those expenses included the unexpected debt payment of more than $525,000 in penalties.

Taking this into consideration, Eckrich said city officials’ subsequent reduction of administrative expenses in 2008 helped to cover the unexpected payment while still having expenses within budget.

“When you look at the budget directly, you don’t see that because the budget shows these huge cash payments we’re making with Proposition S, which are not budgeted. So the budget looks like we’re spending at our budgetary level when really we’re spending quite a bit below our budget amount.”